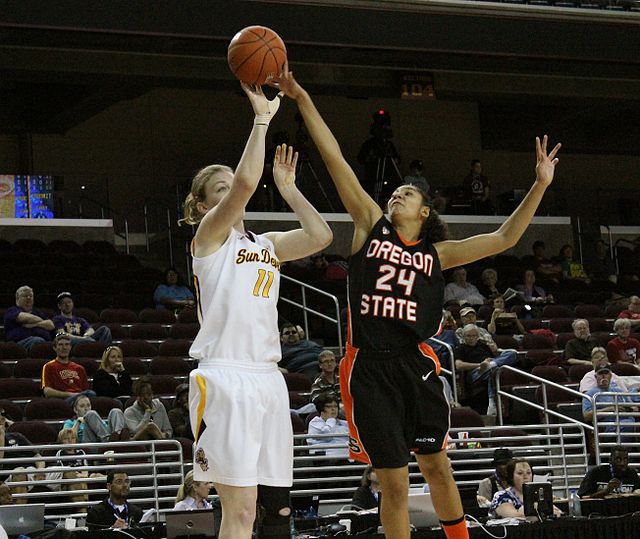 Every spring, the world turns its attention to college basketball and enjoys the best performances of the year from collegiate teams. But this year’s March Madness tournament was about much more than basketball — it sparked a cultural shift for women’s sports.

In the first days of the tournament, players exposed gender disparity in merchandise, COVID-19 testing and training facilities. Women’s teams received lackluster ‘swag bags’ compared to their male counterparts and were provided a weight room with a fraction of the space and equipment. The scandal garnered national attention. University of Oregon forward Sedona Prince helped expose the blatant sexism in her viral TikTok.

it’s 2021 and we are still fighting for bits and pieces of equality. #ncaa #inequality #fightforchange

But beyond giving a voice to women athletes, Prince has cultivated a cultural moment for women’s basketball.

The content of Prince’s TikToks range from what it’s like being 6 foot, 7 inches tall, to protesting the NCAA to all the meals she  eats in a day. The videos have helped attract new fans to the sport, many of whom had never previously watched basketball.

“I was more involved in watching [games] and keeping up with stats this year than in previous years,” Ritika Choudhary (23C). “Normally I don’t pay much attention to March Madness.”

Prince also identifies as part of the LGBTQ community and uses she/they pronouns, adding an additional level of representation.

“For women who are into women, seeing another woman who is attractive play the sport you’re just kind of like ‘Oh, there’s representation out there for me in sports,’” Choudhary said.

The 11.6 million views on Prince’s video illustrate TikTok’s influence on a growing fan base in women’s collegiate sports. Viewership of the women’s tournament increased this year, with the championship game being the most-watched women’s contest since 2014. The men’s championship saw a 14% decrease in viewership compared to 2019.

Best of all, the enthusiasm that TikTok catapulted is not undeserving, as this year’s tournament was full of madness. Here are some of the best moments, teams and players of the year.

A series of dramatic endings

The defining feature of this year’s competition was a constant stream of nail-biters. In the tournament, 23 games were decided within a 10-point spread, and of the games during and after the Elite Eight, 40% ended within just five points.

During the Sweet 16, the two-seed Baylor University (Texas) Lady Bears led the sixth-seeded University of Michigan Wolverines through the first three quarters by just a couple of points until Michigan made a run in the fourth quarter. The Wolverines dropped 23 points in the final frame to tie the game and send it into overtime. In the final seconds of overtime, Michigan junior guard Leigha Brown barely missed a three-pointer that would have tied the game. Baylor took the game with a final score of 78-75.

Two No. 1 seeds, Stanford University (Ca.) and University of South Carolina (USC), brutally battled it out in the Final Four. USC came out hot in the beginning half of the first quarter, but Stanford quickly caught up with a 16-2 run into the second quarter. Neck and neck the remainder of the game, USC found themselves trailing in the game’s final minute.

Down 62-64, USC’s junior guard Destanni Henderson hit a three-pointer with 39 seconds left on the clock to give her team the lead. After a scramble for the ball at the basket, Stanford’s sophomore guard Haley Jones scored, putting her at 24 points for the game. With just 20 seconds left, a series of steals and Stanford’s smothering defense carried them to the National Championship game. Highlights included USC’s star sophomore guard Zia Cooke dropping 25 points and Stanford breaking the record for most three-pointers in an NCAA Tournament run.

Paige Bueckers: the future of basketball?

The University of Connecticut Huskies women’s basketball team is one of the most prolific and dominant powerhouses in the sport. Although the Huskies didn’t take the championship this year, they have an asset that’s debatably better: freshman guard Paige Bueckers. With the talent she showed this season, the nickname “Paige Buckets” is fitting.

Bueckers continuously lit up the court this season, prominently illustrating her scoring prowess in one of the tournament’s most exciting games against Baylor. The game exemplified the best of basketball: bouts of incredible shotmaking and stifling team defense. With under two minutes to go in the third quarter, the Huskies trailed by 10 points, a deficit to which they responded with a 19-point run led by Bueckers.

With a herculean effort and controversial final no-call, the Huskies left victorious with a narrow 69-67 win behind Bueckers’ 28 points. Unfortunately, their run ended in the Final Four against the University of Arizona.

Bueckers has been aptly rewarded for her dominance, sweeping every award possible for which she was eligible, such as the Naismith Trophy, the AP National Player of the Year and the Wooden Award. She is the first freshman to win any of these titles, putting her in a league of her own.

Stanford battled through a tumultuous season with incredibly stiff competition and the pressuring reality of a 29-year title drought. The team spent 87 nights in hotels after being evicted from their home arena due to strict COVID-19 precautions in Santa Clara County. But that didn’t stop them from putting on a show every time they stepped out on the court.

Their championship game versus Arizona did not disappoint, even exceeding the excitement of the slew of other tournament thrillers. Led by Tournament MVP Jones, the game was often within a five-point margin. In the last minute, Arizona senior guard Aari McDonald threatened Stanford’s 54-53 lead but her heavily-contested three-pointer came up short as time expired.

The championship was particularly special for Stanford head coach Tara VanDerveer, who has served as the team’s coach since 1985 but hasn’t won the tournament since 1992. This season, VanDerveer also emerged as the women’s coach with the most wins in the sport.

These frequent nail-biters, especially in comparison to many of the men’s blowouts, proved just how tantalizing women’s basketball is. Despite being treated as second class to their male counterparts, the extraordinary women of this year’s March Madness proved that women’s basketball is no joke.