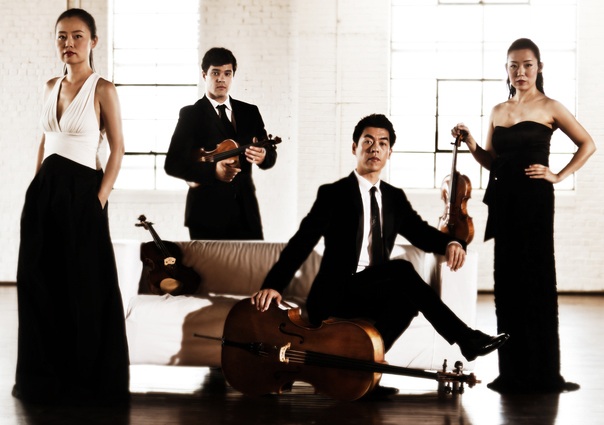 Emory’s resident string quartet is back with a bang as they begin the Emory Chamber Music Society’s 20th anniversary season with a concert of vivacious repertoire accompanied by the cameo of a longtime favorite, the Vega Quartet.

The Vega Quartet debuted in 2001 at Lincoln Center and toured at various concert halls around the world, including venues in Los Angeles, London, Paris, Vancouver, Seoul and Tokyo. The Quartet have been in residence at Emory since 2006. They have played a wide range of works as well as taken part in collaborative programs with the Emory Dance Company, and frequently collaborate with some of the best musicians around the globe.

Last Friday, the Vega Quartet, along with William Ransom, the artistic director of the Chamber Music Society, presented their noontime audience with a diverse, colorful program beginning with the resonant harmonies of Handel. The program continued with the lively Moszkowski and bittersweet Rachmaninoff, as well as the appearance of none other than Ludwig van Beethoven himself, or so it appeared.

The Reception Hall at the Michael C. Carlos Museum is cozy and lighted with menorah-like chandeliers. A large window opens to display the sprawl of the grassy green Coca-Cola-shaped quad, sunlight pouring in from the window slanting onto the wash of pastels and beiges in the audience. With an unassuming position on the ground against the wall, it was surprisingly pleasant to be in almost overbearingly close proximity to the performers, close enough to make out the rise and fall of notes marching across the pages on their stands while we waited for the performance to begin.

Ransom, dressed clean and sharp, approached his introductory speech with genuine enthusiasm. He gave a brief overview of the quartet and what it means to both the Emory campus and Atlanta at large. The Vega Quartet, according to Ransom, aims to become the permanent residential quartet of the Emory and Atlanta community – a goal that, without the help of monetary support, could very plausibly have the potential to be achieved. Ransom expressed, simply and eloquently, the importance of retaining classical music and its impact on the upcoming generation, then took his seat on the piano stool.

As the program started with Handel’s “Passacaglia,” the intimacy of the stage was entrancing, as it bore a strong resemblance to the warmth of smaller performances in Vienna and Salzburg, cities deeply rooted in the culture of Western classical. The Vega Quartet wielded their strengths with a sense of ease and practiced comfort, especially in their attunement and tacit communication with each other as they traversed from the darker lines of Handel to duets with Ransom. These duets included collaborating with Domenic Salerni for Bazzini’s “The Dance of the Goblins” and cellist Guang Wang for Rachmaninoff’s “Vocalise.”

The progression of the pieces was subtle and alluring – from the heavy forces of Handel to the effortless piano glissandos of Debussy’s “Fireworks.” Ransom described “Fireworks” as a prime example of Debussy’s execution of an “extraordinary transformation brought about in musical style,” one that “isn’t given enough credit,” especially with this particular work.

Salerni’s breathless, rapid-fire violin passages had him panting in exhaustion, adding a bit of comic relief to his already enchanting performance. In a similar manner, Ransom took on Moszkowski’s “Caprice Espagnol,” a piece brimming with complex fingerings and rhythms that he made look easy, although he did remind the audience courteously afterwards, “Don’t try this at home.” This portion of the performance brought numerous impressed smiles to the audience’s faces.

“Vocalise,” a song without words but abundant in emotion, created a distinct change in mood and was presented in a delicate, surreal manner on the cello. Wang’s arrangement gave the piece a voice that hauntingly embodied Rachmaninoff’s original masterpiece, which was performed using a combination of vocals and piano accompaniment. Rachmaninoff originally dedicated the piece to Russian soprano Antonina Nezhdanova.

As the audience indulged in “Vocalise’s” lingering melody, suddenly there was a pounding sound at the door, followed by the appearance of a man in 18th century dress waving his hands frantically. It soon became evident, through Ransom’s hints as well as the man’s monologue, that Beethoven, or a man meant to be Beethoven, had graced the audience with his presence. Beethoven made his way to the center of the room, making humorous comments about contemporary sports and music, such as, “Men pay $50 to watch other men chase a little ball around a field!” and “They pay hundreds to watch something called Lady Gaga.”

With emphatic gestures, Beethoven enforced the notion of retaining the significance of classical music in our society, something that we could contribute to beginning with donating to the fabulous quartet. The concert finished with the fourth movement, “Allegro molto” from Beethoven’s very own “Quartet in C, Op. 59, No. 3,” and then an encore of Carlos Gardel’s “Tango,” which left the audience content and humming as they flocked towards the exit.

The Vega String Quartet provided an evening of delight, entertaining an audience of all ages with a wide range of classics that set the tone for the Emory Chamber Music Society’s new season.

The Mediocre ‘Home Again’ Has Its Pleasures

The Culture of Cosplay