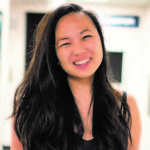 In an unanimous vote, College junior and current Executive Editor Julia Munslow was elected the next editor-in-chief of The Emory Wheel Sunday by the newspaper’s editors, editorial board members and staff. Munslow ran unopposed, receiving 14 votes. In a precautionary re-vote Tuesday, Munslow received 31 votes for and one “no confidence.”

She and her incoming executive board will assume their roles following spring break.

A creative writing major from Rhode Island, Munslow began writing for the Wheel her freshman year. She was promoted to arts and entertainment editor her sophomore year in Fall 2015 and joined current Editor-in-Chief and College senior Zak Hudak’s executive board as executive editor Fall 2016.

In her election speech, Munslow said one of her most purposeful weeks on staff was during the Trump chalkings and subsequent student protests last year. She contributed reporting about and photography of the protests.

“That protest brought me face to face with our University president, campus activists and many discussions about open expression,” Munslow said. “By the end of the week our story had gone national.”

She added that, today, she is unafraid, and eager to run toward protests.

Her duties as executive editor included overseeing the news section and directing reporting. In her speech, the editor-in-chief-elect emphasized the need for aggressive and comprehensive reporting.

“In a time when national media organizations are barred from White House press briefings, journalism and shedding light on the truth [are] more important than ever,” Munslow said.

Munslow aims to “propel the Wheel into the age of digital storytelling” by enhancing the photo and video departments, expanding social media presence and continuing to build the editorial board.

Hudak, who worked with Munslow closely at the Wheel, feels comfortable leaving the Wheel in her hands.

“It’s important that everyone knows that the person in charge works hard, and no one would dispute that Julia works hard, probably harder than everybody else,” Hudak said. “I think the most important thing is that she’s passionate about [the Wheel]. She gets it.”

Current Managing Editor and College senior Elana Cates, who worked with Munslow on the executive board this past academic year, echoed Hudak’s sentiment.

“I’m really happy to see her move on to a new position,” Cates said. “Julia is very passionate about the paper and will lead it in the right direction.”

“She sees [the Wheel] as changing the lives of students at Emory and [allows] us an outlet to report on things that are important to us,” Savino said.

Savino added that he would like for Munslow’s executive board to consult external resources, such as the Computer Science and Film and Media Studies departments, to achieve her goal of building the paper’s digital presence.

“Julia is great at finding and recruiting new people,” Savino said. “It’s just the matter of finding those people who can really help with building our digital [presence].”

Hudak issued a re-vote as a precautionary measure Feb. 28 upon discovery of an ambiguous clause in the Wheel’s constitution.

“We’re setting the highest standard of quorum that the constitution can be held to,” Hudak said. “To be safe, what we did is [we] took the most extreme safest measure.”