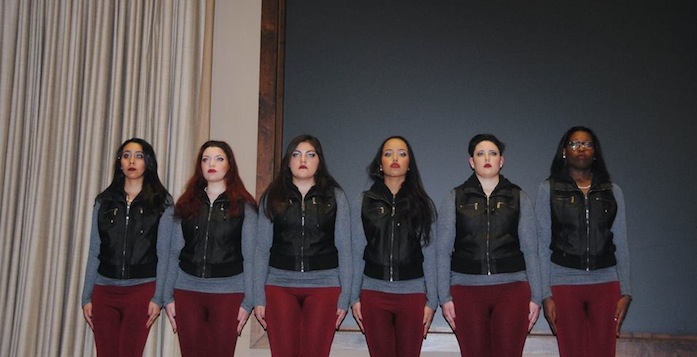 Eight men clad in black-and-gold masks stand in a straight, disciplined line. It’s a chilly November night, but over 100 people are huddled in a semicircle around Tarbutton Hall. One man dances out of line to cheers from the crowd, then an anxious silence envelops the plaza as he waits to take off his mask.

One by one, the rest of the men reveal themselves to the community, sharing their newly-given line names, or intimate nicknames acquired during the pledging process, their hometown and majors. These are the men of the Mu Alpha chapter of Alpha Phi Alpha — the fraternity that returned to Emory’s campus after a three year hiatus due to hazing violations — who are ready to wear their letters with pride.

Members of Alpha Phi Alpha, commonly known as the Alphas, were unveiled in a probate, or a display of fraternal history, brotherhood, dancing and discipline. Led by a constant swaying of head nods from alumni and students alike, the new Alphas made their way through a roll-call of fellow National Pan-Hellenic Council (NPHC) organizations in attendance, performed highly elaborate and synchronous dance routines and recited facts about the ideals and history of the fraternity with an high level of discipline and precision.

The Alphas are one of the six NPHC fraternities and sororities on Emory’s campus.

To the uninitiated, the new member process that NPHC and Multicultural Greek Council (MGC) organizations go through may seem unusual — one observer at the Alpha Phi Alpha probate likened it to a mixture between a boot camp and Bar Mitzvah — but the processes are steeped in history and tradition unique to each organization.

Arthur Doctor, assistant director of Sorority and Fraternity Life and the primary advisor to the MGC and NPHC, said that each organization has a different terminology for the process, whether it be a probate, new member presentation or reveal.

Doctor said that in 1990, to combat hazing, the organizations of the NPHC banned public pledging as a form of new membership admission and instead focused on an underground secret membership intake process that culminates in members revealing themselves to campus as a new person who has pledged to uphold the ideas and values of their respective organizations.

While the specifics of the respective new member processes largely remain secret, new members spend their time “online,” or undergoing the new member process outside of the public eye, learning about the ideals and histories of their organizations, growing closer with the rest of their pledge line and performing several song and dance routines at their reveals.

Additionally, most of the NPHC organizations are required to be affiliated with an alumni chapter that provides mentorship, the chapter advisor and an emphasis on lifelong dedication and service to the organization.

In regards to the new member process and the NPHC and MGC groups on campus, Doctor encourages Emory students who may not be familiar with the organizations to reach out and get to know more about them and what they do.

“Most of the service and philanthropic endeavors these groups take on are every week, they’re in the communities and very hands on,” Doctor said. “That’s stuff I think a lot of people don’t see, and if they did, there would be a lot more understanding about the NPHC and MGC groups.”

Doctor added that the new member process is an opportunity for those who go through it to become more aware of themselves and grow into a newer, better person.

Satterfield echoed Doctor’s sentiment and said the new member process is unique because it forces you to really think about your strengths and weaknesses as a way to build yourself during the process.

“The process allows you to think of yourself in the context of a brotherhood,” Satterfield said.

“The entire process is so applicable because I’ve been able to take away so much and translate it into different environments as well,” he said. “In my current role as a member of the STEER Team in the Office of Student Leadership and Service, I’m constantly reminded of what I’ve learned and how much I’ve grown both as a person and professional.”

Satterfield said that the moment he and his fraternity brothers were able to reveal themselves to the community was the biggest sigh of relief he has ever had.

“During our new member process, I had to pretend as if I wasn’t undergoing one of the most challenging and time-consuming moments in my life,” Satterfield said. “I had to carry on with my classes, extracurriculars and leadership positions as if I had everything under control.”

Satterfield pointed to the fact that the several-month process was made less challenging by his fraternity brothers to be able to undertake together.

“[My brothers were] also why I was able to finish,” Satterfield said. “I had seven other individuals who supported me when I didn’t have the energy or courage to juggle it all.”

For Nell Hodgson Woodruff School of Nursing senior and President of Lambda Theta Alpha Latin Sorority (LTA) Analy Varajas-Gonzalez, their intake process is an exciting time for all involved. LTA is an MGC that was founded at Emory in 2003.

At the LTA new member presentation on Nov. 19, the six new members of the sorority recited history of the sorority, poems about their older sisters in the sorority and revealed their identities to a packed crowd in the Woodruff Health Sciences Center Administration Building Auditorium.

In between different parts of the presentation, cries of “I see you Ace! I see you Tail!” echod from members of Emory’s NPHC and MGC communities, sister chapters from other schools and a number of curious onlookers there to learn more about what was taking place.

Varajas-Gonzalez said the decision to undergo the new member process for LTA is something to be cherished and is just the beginning for the creation of lifelong bonds among all sisters.

“Although we are Latina-based, we are not Latina-exclusive,” Varajas-Gonzalez said. “Lambda Theta Alpha prides itself in its philanthropy and strong bonds among sisters.”

For Satterfield, his decision to become a member of Alpha Phi Alpha will not be over once he walks across the stage as he graduates in May. What he learned along the way is something more.

“This process has shaped my life in ways that extend beyond my time at Emory and I’m so excited to continue this lifelong journey as a man of Alpha Phi Alpha,” he said.