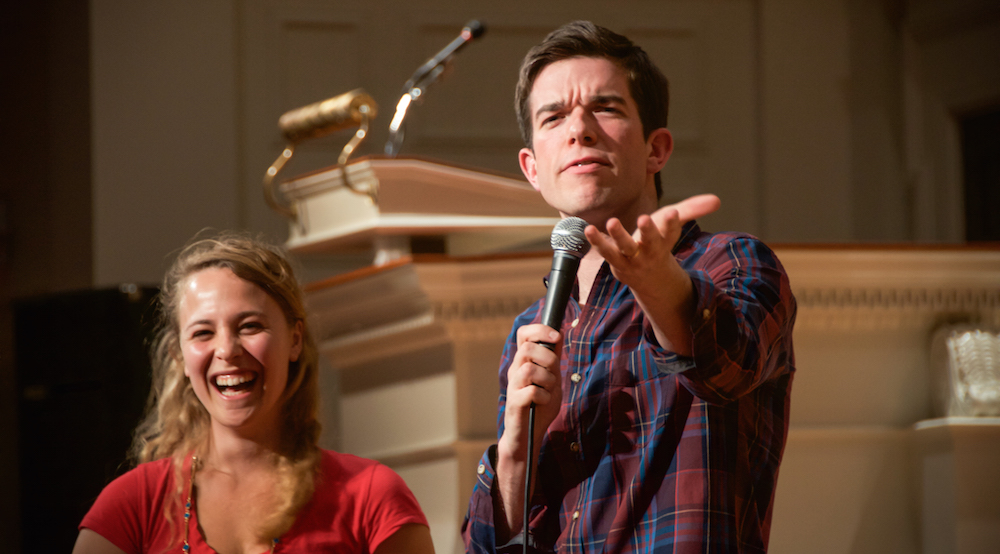 The Student Programming Council (SPC) turned away more than 100 students standing toward the end of the line to the church entrance, which flanked Fishburne Drive and coiled into the Fishburne Parking Deck. Those who got in line early filled the auditorium to its 1,200-person capacity for the comedy show, one of the University’s series of annual Dooley’s Week events.

The opener, writer and comedian Matt Silvestri, reminisced about his college days, when he could better sustain a night of binge drinking.

“Hangovers aren’t a thing when you’re in college,” he said, adding that he now requires two days of post-party recovery. “It took me like six months of having these 48-hour hangovers to realize that I’m getting older — like, guys, I got roofied again!”

Mulaney, a lanky figure with an ear-to-ear smile, drew a standing ovation when he stepped onstage, singing a high-pitched Catholic church hymn — a nod to the Glenn Church — and recalling his days as an altar boy.

“Its weird to me that [saying I was an altar boy has] become a weird thing to say, because for me it was just some boring thing I had to do on weekends,” he said. “But now it’s like saying, ‘Oh, I was a French maid for a time.’”

After poking fun at the location, he turned to the University’s student body.

“I love coming to the Deep South to perform for people from Westchester and Long Island,” he said.

Mulaney, who said he gave up conversational transitions for lent, quickly jumped to the topic of his marriage last summer to author and makeup artist Annamarie Tendler.

“I married a Jewish woman from New York and it is very exciting,” he said, adding that his Catholic mother had asked him if Tendler was willing to convert.

“Maybe I’ll come home with a brochure one day, like, ‘Honey I’ve got this not new thing to tell youabout … don’t Google us!,” he said.

As the cramped auditorium grew stuffy and hot, Mulaney thanked the audience for their stamina.

“I hope you don’t regret being backed into the hot church,” he said. “You came in and you were like ‘uh-uh, I don’t like this.’ It’s like when you swallow drugs and you’re like, ‘I shouldn’t have done that. Now my whole night’s gonna be different.’”

Mulaney later noticed a Wheel photographer snapping a few photos of the performance, and asked the audience the name of the University’s newspaper.

“Why is it called ‘the Wheel’?” he asked the audience. Mulaney turned back to the photographer. “I don’t know if you just saw it, but a hundred people just went” — and he shrugged and raised his hands.

He quickly apologized and jokingly said he loves the Wheel and reads it every day.

After joking about a male student’s tank top — “This is what you would wear to one of the best institutions in the U.S.?” — he turned to what he called “the biggest civil rights movement” he’s ever seen.

Now, he added, animated filmmakers “spend millions of dollars and get all these famous people to do the voices, like a kid is gonna go: ‘Who is the voice of the cockatoo in this movie? Oh, Mark Ruffalo — he’s fantastic!’”

He then reminisced about his own childhood, and specifically a fateful trip to McDonald’s.

“We’d be chanting in the backseat, ‘McDonald’s! McDonald’s! McDonald’s!’ and then we’d pull up to the drive thru, and we’d start cheering, and my dad would order a black coffee for himself,” he said as the audience roared with laughter. “Even my mom, who’s worked in child welfare … she said that’s fucked up you shouldn’t have done that.”

Though the experience was so painful at the time — “the one thing a kid can’t enjoy at McDonald’s! Not even a sugar packet!” — he said he sees the trip today as “the funniest thing I’ve ever seen a human being do.”

He then recalled his elementary school report cards, which contained one grade for test and assignment scores and another for effort, and pondered whether he was lazy or stupid as a child. While the “effort grade” frustrated him as an elementary school kid, he said, his mom placed them above the “regular grades.”

“She said, ‘I wouldn’t mind if you got all Cs and Ds and you got As for effort,’” Mulaney said. “I was like, ‘You wouldn’t be sad?’ The teachers would be like, ‘Mrs. Mulaney, your son is trying as hard as he can with that little coconut brain of his, and he still has an F. He’s an idiot. But he’s a sweet, hardworking idiot.”

He later asked about Georgia’s marijuana policy, adding that his home state of California is far more lenient.

“Trust me once they make it medicinal, its recreational,” Mulaney said. “You go into the hospital and say, ‘Aw, I burned my hand on the stove I need some medicinal weed.’”

He also commented on the government’s hesitant embrace of marijuana decriminalization, which, unlike something crucially important like same-sex marriage rights, “is just something we wanted really bad.”

“This is the first issue when the government has just been like, ‘Ugh, fine,’” he said. “It’s like suddenly the government has become something like cool parents, like, ‘Okay here’s a little, we’d rather you do it in the house.’”

In light of the Dooley’s Week event schedule, he also questioned the audience on the history behind Emory’s unofficial mascot. When a student told him that the University’s real mascot is an eagle, he said, “Who gives a shit about an eagle?”

“A skeleton is much more intimidating than an eagle,” he said. “I say now Dooley should be the official mascot of Emory! And let’s ban frat stuff! Just kidding.”

College junior Aileen Rivell said she thought the show “was so funny,” specifically the joke about his father’s not-so-kid-friendly McDonald’s order.

She added that she didn’t like one joke he made about “crazy people saying meaningless things, as if the things they say are just for his entertainment.”

Business School sophomore Ian McIsaac said he liked the way Mulaney would improvise jokes using the audience in between longer stories, but wasn’t a big fan of the show’s content.

Megan Waples, a College freshman, agreed with McIsaac in terms of Mulaney’s ability to improvise with the audience between prepared material, and said she thought the show “was really well-paced,” and that “the ‘no transitions’ thing was amusing.”