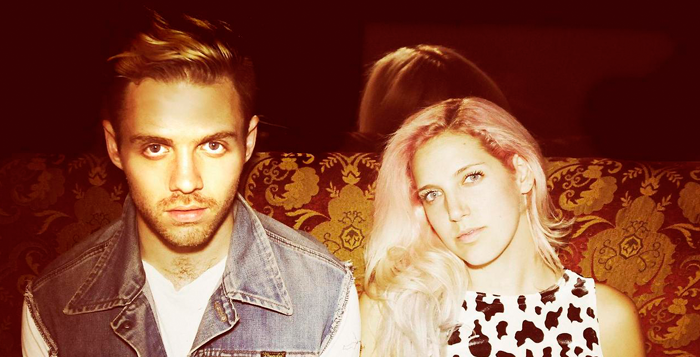 Sometimes things are just meant to be. That’s certainly true for Brooklyn-based duo Max Hershenow and Lizzy Plapinger, the names behind MS MR.

Although they attended the same university together, it was not until after they graduated that their creative energies joined Plapinger’s vocals and Hershenow’s music, thus forming the euphonious universe of MS MR.

Albert Einstein once said: “The most beautiful thing we can experience is the mysterious.” MS MR released their debut EP Candy Bar Creep Show anonymously via Tumblr in 2012.

And while Hershenow and Plapinger’s identities may have been a mystery to most at the time, their entrancing sounds were a full experience of artistically crafted beauty.

Ever since Candy Bar Creep Show, the gates to MS MR’s musical universe have opened to the world, and the beauty of their sounds remains riveting today.

Last year, MS MR released Secondhand Rapture. Each song – from the escalating darkness of “Dark Doo Wop” to the pristine smoothness of “Strings” to the shadowy sultriness of “Hurricane” – has a radiating rawness that raids deep into the core and mind of listeners. Synth-pounding MS MR is currently on tour until June.

Hershenow and Plapinger took the time to answer some questions via email for Copy Chief Benazir Wehelie, discussing everything from Tumblr to their favorite television shows to world domination.

Benazir Wehelie: You both attended the same university but did not make any music together during that time. When did you eventually decide to pursue music together?

MS MR: We only started to make music together after we graduated as a result of a somewhat blind email exchange. We didn’t know each other very well, but Max was looking for opportunities to explore production and Lizzy was looking for an unbiased critique of her voice and songwriting. We connected pretty much instantly, and the rest is history.

BW: When you initially began releasing music, you kept your identities a secret. What was the reason behind that, and how do you feel now that MS MR is no longer a mystery?

MS MR: So often pop music becomes more about the personalities creating the music than the music itself, so we decided to release our initial tracks anonymously so people would come to it for the right reasons. Additionally, Lizzy has worked in the industry most of her life and we didn’t want that to color the listener’s experience (for better or worse), or to make the project more about Lizzy than Max. But it was never our intention to stay mysterious – even at our first shows we didn’t wear masks or anything, and since then it’s been great to open up and share who we are beyond the music.

BW: You released your debut EP Candy Bar Creep Show via Tumblr. What role does Tumblr play in your music today?

MS MR: For us, Tumblr is an ever-evolving mood board that we pull from when we need inspiration for videos, photo shoots and even the music itself, but it also serves as an incredible way to relate to and engage our fans.

MS MR: It further emphasizes our love and dedication to experimentation and opens the door for us to continue to push our music in unexpected ways. Our best songs come from combining seemingly disparate sources of inspiration.

BW: Describe the creative process and meaning behind your first single “Hurricane.”

MS MR: “Hurricane” was inspired by Hurricane Sandy, which threatened New York City in 2011. Even though we spent the night apart preparing for the storm, we separately started working on the ideas of what would become the song. The next morning Max sent Lizzy the track he had started and Lizzy used the lyrics she had started the night before. It all came together seamlessly and more quickly than any other song we’ve written – we recorded it the very next day.

BW: “Hurricane” was featured in a runway show by designer Tom Ford, and “Bones” was used in a trailer for the HBO television series “Game of Thrones.” What are your must-have or favorite clothing items and television shows you love to watch when you are on tour?

MS MR: We’re huge fans of “Game of Thrones” and now that it’s back on we’ll definitely be watching as it unfolds on tour! Aside from that, Lizzy has been watching “True Detective,” “Cosmos” and “Nashville.” Max has been rewatching “Twin Peaks” and guiltily binging on “Scandal.” We both can’t go anywhere without our black motorcycle jackets.

BW: Max, you have lived in Latin America and Lizzy, you grew up in London, but you both now live in New York. What are your favorite aspects of each of these areas in the world?

MS MR: The culture in each of these places significantly influenced our love of music and continues to shape our work in often unexpected ways. But it’s sort of impossible to choose a favorite aspect of a place you’ve lived for a long time!

BW: What is something your fans would be surprised to know about each of you?

MS MR: If we weren’t in the music industry, we could have both potentially ended up in fine arts or dance.

BW: Complete the sentence: MS MR is looking forward to _____.