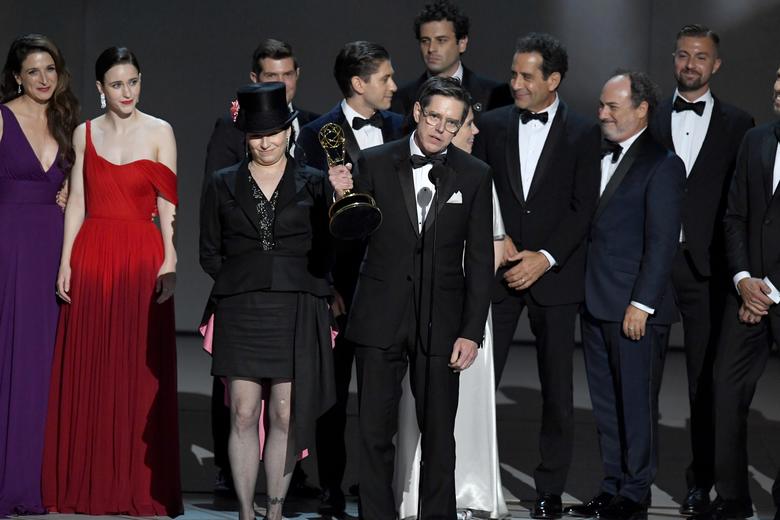 The 70th Annual Primetime Emmy Awards proved a night of surprises, occasional poor punchlines and an exhibition of the best of modern Golden Age Television.

The Amazon series “The Marvelous Mrs. Maisel” was the big winner of the night, dominating the comedy categories, clinching the top honor of Outstanding Comedy Series. Amy Sherman-Palladino became the first woman to win both Best Writing and Best Directing on the same night, which she received for her work on the series. Lead actress Rachel Brosnahan and supporting actress Alex Borstein won in their respective comedy acting categories, as well. The new HBO dark comedy “Barry” also went home with several awards. Henry Winkler was greeted with a standing ovation for his first Emmy win in his 40+ year career for his supporting performance as eccentric acting teacher Gene Cousineau. In addition, Bill Hader prevailed in the Outstanding Lead Actor in a Comedy category for his performance as the titular hitman-turned-struggling-actor Barry Berkman.

“Game of Thrones” (GoT) reclaimed its 2015 and 2016 title as Outstanding Drama Series winner, defeating last year’s victor “The Handmaid’s Tale.” GoT also picked up the award for Outstanding Supporting Actor in a Drama for the now three-time Emmy winner Peter Dinklage, tying him with Art Carney, Don Knotts and Aaron Paul as the most awarded actor in that category.

The Netflix series “Godless” swept the supporting categories for limited series, as actors Jeff Daniels and Merritt Wever both went home with accolades for their supporting performances. “Black Mirror” won its second writing Emmy for its ode to “Star Trek”: “USS Callister.” It also won the prize last year for the sci-fi romance “San Junipero.” Actress Regina King appeared shocked when she won her third Emmy, this time the Outstanding Actress in a Limited Series or Movie award for the Netflix original, “Seven Seconds.”

For Outstanding Supporting Actress in a Drama, Thandie Newton bested the supporting actresses of “The Handmaid’s Tale,” Ann Dowd, Yvonne Strahovski and Alexis Bledel, for her performance as the mischievous android Maeve in the HBO series “Westworld.” Claire Foy also dethroned reigning champ Elisabeth Moss in the Outstanding Lead Actress in a Drama category, winning for her final season as Queen Elizabeth II in “The Crown.” In an unexpected turn, “The Crown” also took the prize for Best Directing for a Drama, beating out previous favorites “The Handmaid’s Tale” and “Game of Thrones.”

“The Americans,” a show that has never made much of an impact at the Emmys in its previous seasons, was finally awarded for its final season. The FX thriller won two awards: Best Writing in a Drama for its finale and Outstanding Lead Actor in a Drama for star Matthew Rhys, upsetting presumed front-runner Sterling K. Brown.

For the first time in its history, “Saturday Night Live” won Outstanding Variety Sketch Series in back-to-back years, winning both this year and last. “SNL” has now won a total of 72 Emmys across its 43-season run.

The highlight of the night was undoubtedly when the director of “The Oscars,” Glenn Weiss (winner of Best Directing for a Variety Special) proposed to his girlfriend on stage. During a show that, for the most part, felt like an average award show, this was a beautiful and touching moment that elevated the rest of the night’s proceedings.

The ceremony as a whole was a fairly standard, but entertaining, night of television. The show got off to a rocky start, with an awkward opening musical number and a stiltedly delivered, but occasionally funny, opening monologue by hosts Colin Jost and Michael Che, who tackled the #MeToo movement, “Roseanne” and a joke about an all-white reboot of “Atlanta” titled “Fifteen Miles Outside of Atlanta.” However, after the opening monologue, the show became quite consistent in quality, with great speeches, a deeply affecting “In Memoriam” sequence and fairly funny moments throughout.

Another great moment from the night was the pre-recorded segment “The Reparation Emmys,” where Michael Che went around New York handing out Bill Cosby’s Emmys to important African-American actors in television history such as Jaleel White, Jimmy Walker and Marla Gibbs. The segment had a perfect blend of humor and social relevance, making it a great addition to the telecast.

The show was well-paced and the ceremony actually ended on time (a rare occurrence for an award show). The biggest bomb of the night was the surprisingly unfunny recurring segment “History of the Emmys.” The segment revolved around SNL alums Maya Rudolph and Fred Armisen who were supposed to study up on Emmy trivia and recite it throughout the night but they forgot to study. That’s the joke. The segment failed to provide anything more than awkward silence from the crowd.

Overall, the “70th Primetime Emmys Ceremony” came off like a middle-of-the-road episode of “SNL,” with some hard-hitting and successful moments and others that landed with a dud. The results were a great blend of surprises, upsets, career triumphs and a marriage proposal, making the 2018 Emmys ceremony a decent telecast.