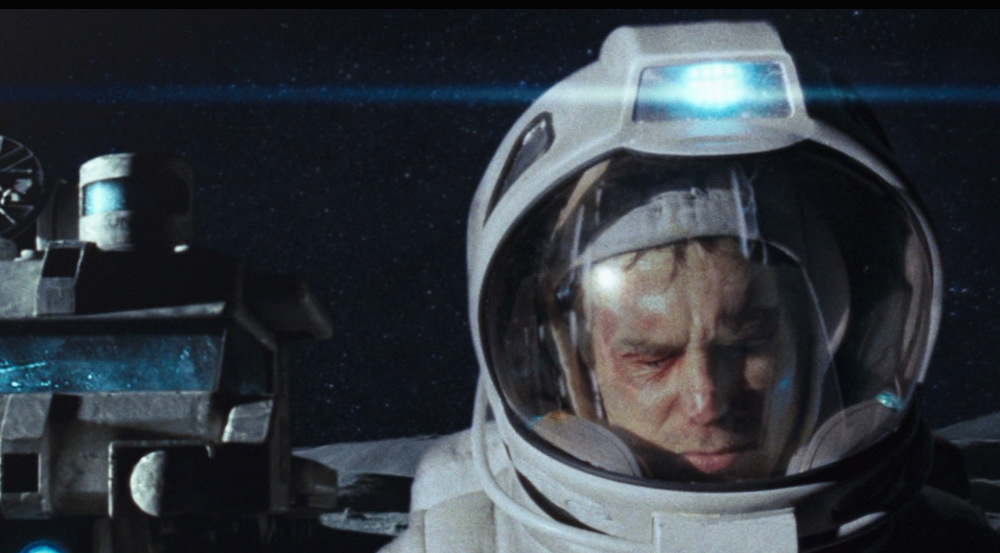 Three years alone on the moon. It sounds like the premise of a sci-fi horror film set in the distant future; perhaps the astronaut is marooned, left there by a mutinous crew, or perhaps he struggles to stay alive in the territory of an aggressive and previously unknown moon-creature. But Duncan Jones’ 2009 film, Moon, takes this clichéd and futuristic premise and creates something that’s undeniably relevant to us. Right now.

As the sole human on the lunar mining base “Sarang,” Sam Bell lives each monotonous day fueled by the knowledge that in two weeks, his three-year contract as a Lunar Industries mining technician will be over. The live-feed from Earth is broken, so he must wait for intermittent video messages from his wife, Tess, and young daughter, Eve, to come through. Each time the monitor displays a new message, he scrambles across the clean, 70s-inspired room to get a treasured glimpse of the women he loves.

With only two weeks left, the loneliness takes an ever-increasing toll on him. He talks to himself. He talks to his plants. He begins to see the form of a dark-haired woman in his armchair. During an outing to check the status of his mining machine, he sees, through the thick windshield of his moon truck, a blurred figure standing on the gray surface. He can’t pull his eyes away, and the truck barrels into the mining machine. The collision leaves him unconscious and barely alive.

Injured, Sam’s return to Earth is indefinitely postponed, and he wakes up to find that he’s no longer alone on the base but must share the space with a strange man whose name is also Sam Bell. Each Sam defensively dismisses the other as a clone, and to reveal any more of the sparse, thoughtful plot would be a disservice to this film (which you really should see).

As the relationship between the two Sams unfolds, both of them continue to spend time relishing in memories of Tess and Eve and the dream of returning to Earth. It seems strange because we know at least one of them is a clone and, thus it’s possible that neither of them have actually met their supposed wife and daughter or set foot on Earth, but it doesn’t matter. Both Sams are emotionally sustained by memories and hopes. They desperately want the love that Tess and Eve offer via pre-recorded video messages even though they know that the love, the messages and their emotional existences could be complete illusions. They dream of returning to Earth even though it’s entirely possible one or both of them might never have actually existed on Earth. Their ultimate goal is to be reunited with Tess and Eve even though the two women may not even know who “Sam Bell” is, and that goal sustains them.

That says something equally strange and beautiful about human nature.

When the Sams learn that one — or both — of them is a clone who experiences a set of copy-pasted memories, we might expect them to cease caring, but instead, they’re fully willing to believe in the emotional relationship in order to sustain themselves. What they experience inside of their minds trumps every external stimuli, governing their actions and guiding them to survival. Deep within the DNA (presumably) used to create the clones is a weird sense of willful solipsism that propels them beyond the boundaries that the energy corporation’s mechanized, cost-benefit analyzed decisions set up for them.

For me, science fiction set in the dystopian future always evokes questions of human purpose and destiny. Living in this world, we pursue dreams, careers, (hopefully) love-lives, families, and successes, but what is the ultimate goal? Our technology grows ever more complex; the once-simple things needed to sustain us — food, water, energy, shelter — are now completely out of our hands. We’re too busy for the notion of “farming,” horrified by the thought of drinking unpurified water, unable to carry out daily tasks required of us without electricity to power our multitude of devices and machines.

It seems our definition of success is to propel ourselves as far as possible from the fundamental, untouched, biological condition that created us. To me, Moon speeds up the clock a bit, showing us a vision of the direction that our concept of success is leading us to: a world where we’ve lost our sense of what being a human is, where the Earth cannot handle the demands we make of it and where we have to turn to a corporate machine to prop up our existence.

While Moon, as a cinematic composition, leaves much of its intended meaning to our own individual interpretations, it raises a core question: we seem to be driven to reach as far as possible beyond what it fundamentally means to be human, but how far will we go before our humanness catches up?