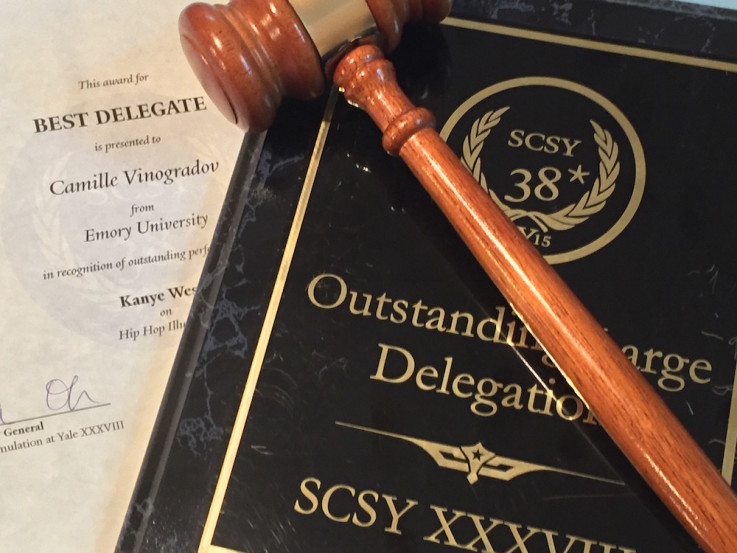 According to College senior and EMUN Head Delegate David Stevenson, EMUN is one of the larger university Model United Nations (MUN) organizations in the nation and sends out approximately 50 delegates every year to several academic conference competitions.

The conference at Yale focused on crisis committees, where cutting-edge groups of student delegates must draw on extensive social and political hypotheses to solve a crisis of immediate importance. Committees are given a short amount of time to consider every possible solution and consequence of their proposal, therefore simulating the atmosphere of real-world response committees at the government level.

Twelve Emory students of all different majors and years participated at this most recent conference in their own individual committees. The independence and self-reliance demanded of this set-up was a welcome challenge for the delegates.

EMUN was awarded the Outstanding Large Delegation Award. According to College senior and Co-President of Emory International Relations Association (EIRA) Camille Vinogradov, EMUN won this award over 30 other prestigious schools, like Columbia University and Vanderbilt University.

College freshman Angela Jiang and Vinogradov won Best Delegate for their respective committees, and thus were honored with the top prize of a gavel.

College freshman Mehvish Khan was awarded the Outstanding Delegate title for her work in the Israel-Palestine crisis committee for which she proposed a two-state solution.

Currently ranked 14th among university MUN organizations in the nation, Stevenson has high hopes to break the Top 10 by as soon as Spring 2016.

“[This win] reflects that Emory students can have the ambition to have an idea and run with it over a short amount of time. More prestigious schools know Emory, and [it’s almost as if] we’re taking on an ambassadorial role to represent the South,” Stevenson said.

EMUN is currently preparing to host their fourth conference this coming spring, and with their win Stevenson hopes to expand the number of Top 20 university MUN organizations to come to Atlanta and see Emory.

Despite their strong organization and member involvement, Stevenson has high hopes that MUNE’s recent momentous wins will attract even more interest and talent in their organization.

Stevenson believes the workshops and training that EMUN provide are remarkable ways for students to build confidence, become outgoing, see things in new lights, engage in conversations and most importantly, speak up.

Stevenson firmly believes an Emory student of any major can gain and apply a vast range of skills of and beyond communication, negotiation, creative problem-solving and critical thinking.