“Miss Bala” is a frustratingly monotonous action film about an American, Gloria Fuentes (Gina Rodriguez), whose world is turned upside down when she is caught in the middle of a war between a Mexican cartel group, led by Lino (played by Ismael Cruz Córdova), and the Drug Enforcement Administration. The end product is as bland, unoriginal and uninspired as this premise would imply.

The film follows Gloria and her friend Suzu (Cristina Rodlo) in Tijuana, Mexico, where Suzu has entered a beauty pageant. When they are kidnapped by Las Estrellas, a Mexican gang, Gloria must act as a double agent for Las Estrellas and the D.E.A. to find Suzu and escape.

“Miss Bala”’s poorly strung-together plot drags the film down. The film consists of individual, unrelated scenes, with only the first and last 30 minutes of the film related to the plot. The middle hour consists of Rodriguez’s kidnapped character working alongside her captors. These scenes become increasingly random and do not contribute to the plot whatsoever. Every 10 minutes, the screen cuts to black and the characters wake up the next morning with another small, random mission to complete.

Exacerbated by these cuts, the movie is littered with massive, frustrating plot holes. There were multiple easy ways that Gloria could have escaped Las Estrellas but, frustratingly enough, she keeps running back to her captors, which is complexing because she never tolerates or willingly works with them. Her entire motivation is confusing, which dooms the film.

The film’s cinematography could also have been more innovative. Its lack of overall creativity makes the film not even visually appealing. On only a couple occasions was the camerawork decent enough to be considered creative. There was a moment where Cordova’s character was silhouetted so just his outline was shown. The film also featured some landscape and bird’s eye views of Tijuana, the primary setting of the film.

The actors seemed to deliver their lines with little enthusiasm. The film features Anthony Mackie (best known for playing Marvel’s Falcon), but his character is criminally underutilized. Rodriguez did the best she could with the stale and poorly written script. Her character arc required her to display a large range of emotion, which she pulled off successfully. Admittedly, her performance was intriguing, making her easily the highlight of the entire movie. However, it was not nearly enough to make the overall film entertaining.

“Miss Bala” is a remake of a 2011 Mexican film, which was much more critically acclaimed. Rodriguez tries in vain to carry the entire production on her back — the only entertaining aspect of the film. If anything, this film is only for fans of Rodriguez willing to shell out $10 for little else. 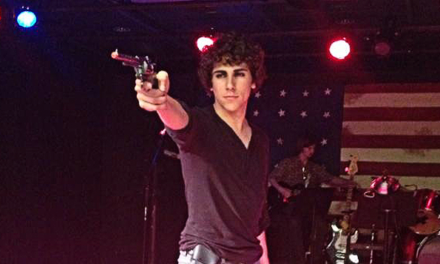 Exploring the Rock History of America