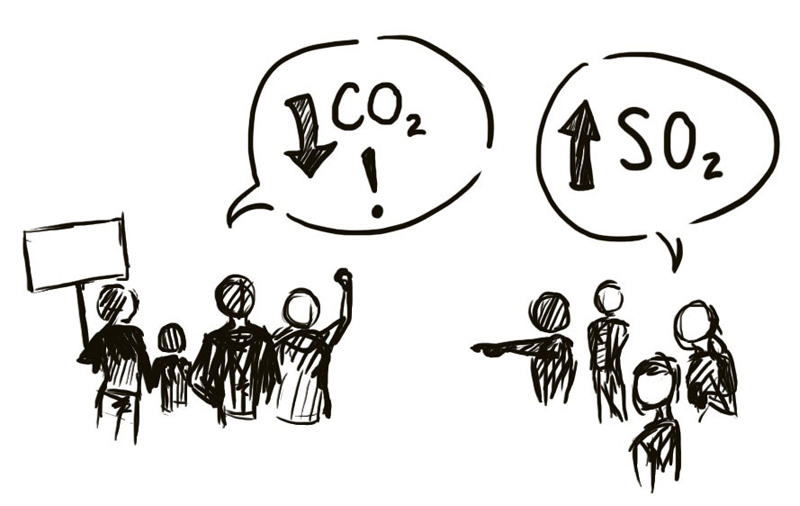 Many global warming alarmists have created apocalyptic scenarios where nations are flooded out of existence.

For example, hurricanes are unstoppable and drought causes famine globally. These frightening scenarios have often drawn attention to what is believed to be the main contributor of global warming: carbon dioxide (CO2) emissions.

Those who worry about global warming believe the government must take action via Cap and Trade, Environmental Protection Agency (EPA) regulations and other government regulations that attempt to decrease coal and other CO2 producing products.

These policies, although well-intentioned, will have the exact same adverse effects on the earth’s climate that alarmists wish to prevent.

This gas is SO2, an aerosol that actually has a cooling effect on the earth. In his 2008 article, “Why Reducing Sulfate Aerosol Emissions Complicate Efforts to Moderate Climate Change,” Zeke Hausfather, who holds a Master of Arts in Environmental Management from Yale University and is the chief scientist of Energy Efficiency 2.0, describes a 50-percent decrease in aerosol emissions as an effect of decreasing coal fire plants.

The study found that the removal of aerosol from the atmosphere “would increase global temperatures by roughly .36 degrees Celsius” and that the total net effect is when “warming suddenly becomes 1.70 degrees Celsius,” instead of the current pace projected by scientists (1.34 degrees Celsius).

The case for aerosol continuation becomes even stronger when you look at a full decrease in our emissions of sulfur aerosols.

The full decrease would cause the earth to “warm by another 1.2 degrees (1.6 Watt/m2) above the present level, resulting in near doubling of global warming,” according to Andrew Glikson, an Earth and Paleoclime scientist at the Australian National University. The detrimental effects of decreasing carbon-based emissions are especially bad given some scientists believe that a two-degree ceiling exists where earth will be able to respond without the cataclysmic effects of global warming occurring. Glikson notes that the “magical two-degree ceiling determined by governments is only holding thanks to effective, if unintended, geo-engineering by suphur dioxide.”

The effect of regulations on carbon based emissions is best summarized by Almut Arneth, a professor at the Department of Physical Geography and Ecosystem Analysis at Lund University, Sweden and Nadine Unger, a researcher at the NASA Goddard Institute for Space Studies, Center for Climate Systems Research at Columbia University when they say “pollution control could accelerate climate change.”

The question many people ask is, if aerosols and CO2 emissions occur at the same time, wouldn’t a decrease in both solve the bad emissions sufficiently to make the loss of SO2 an irrelevant concern?

The problem with this assumption comes from the lifetime in the atmosphere that each substance spends. The fact that “CO2 and SO2 are emitted simultaneously, but SO2 has a much shorter lifetime (days) in the atmosphere than CO2 with a lifetime of around 100 years. This implies that a simultaneous reduction of CO2 and SO2 can result in an initial increase in radiative forcing, as the reduction of aerosols is translated much faster into a forcing signal than the reduction of CO2,” according to Jessica Strefler, Gunnar Lunderer and Elmar Kriegler of the Postam Institute of Climate Impact Research in Germany.

The result of the decrease in both CO2 and SO2 simultaneously is that the warming effects of CO2 remain in the atmosphere for a century, but the cooling effect of SO2 is quickly lost, leaving Earth’s climate far worse off than had no emissions reductions occurred.

Although well-intended, policies which attempt to regulate the amount of carbon-based emissions put the cart before the horse. The reduction of both CO2 and SO2 result in a net positive increase in the temperatures on the Earth and actually increase the rate of global warming beyond the “magical 2 degree threshold.”

A better policy forward would be to pursue carbon sequestration technology where we will be able to reduce the harmful CO2 emissions from carbon based fuels and allow for the continuation of the cooling effect of SO2 and other aerosols while we search for new energies that don’t rely on carbon. Rational policy makers must not fall victim to the dilemma of trying to respond to a crisis and ignoring the externalities of their policy.

Regulation of carbon and a decrease in emissions is a good goal, but without considering the affects such policies would have on aerosols policy makers may actually create policies detrimental to desired outcomes.

Kentucky Morrow is a College freshman from Edina, Minn.

For the GOP, Loyalty Trumps Democracy

In the Fight for Abortion Rights and Health Care Equity, Systemic Racism Matters