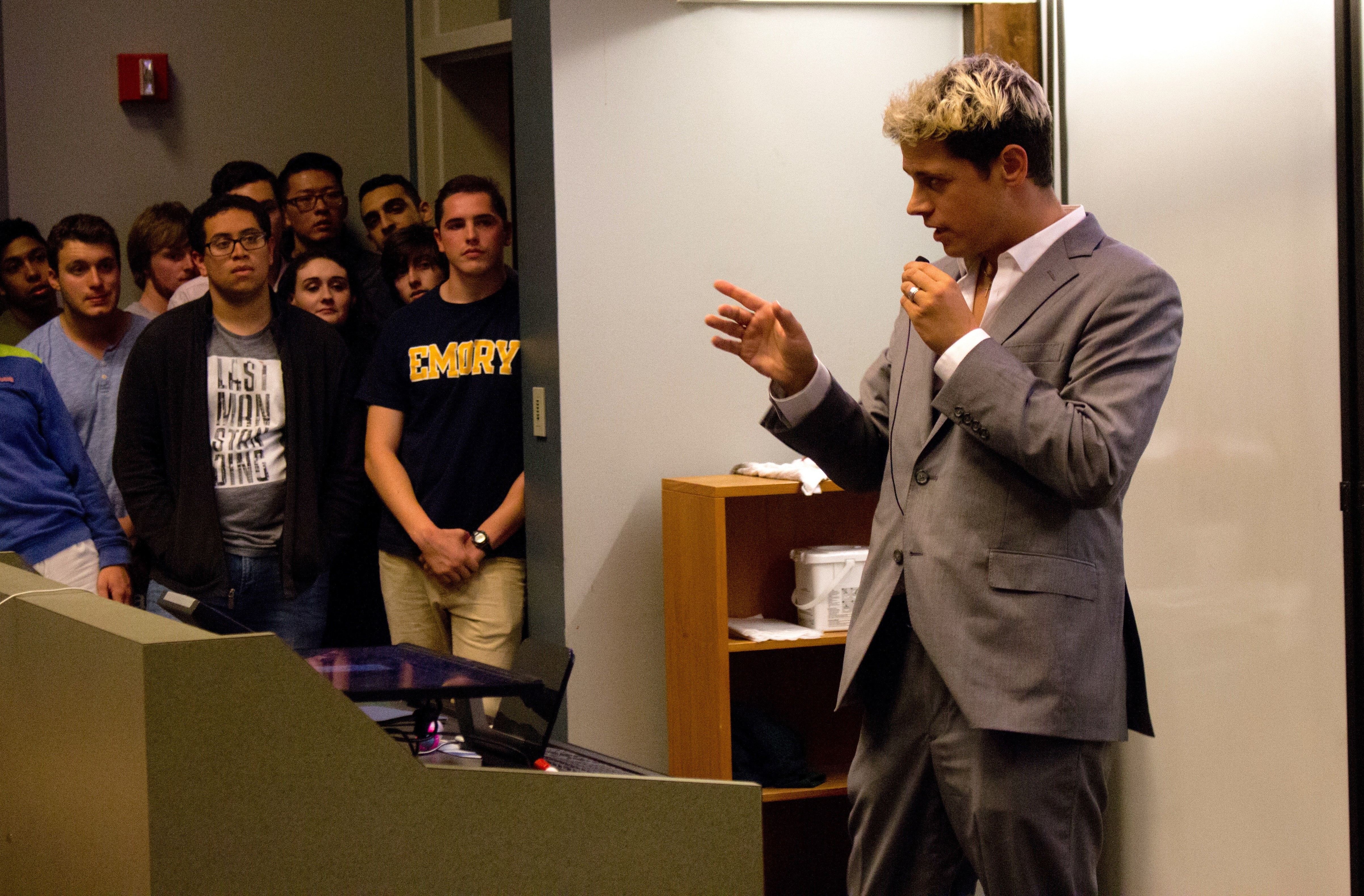 Milo Yiannopoulos, tech editor of the conservative website Breitbart, drew a crowd of over 250 at White Hall Wednesday. Some went to hear his perspectives, others to protest. Emory wasn’t originally a planned visit on his “Dangerous Faggot” tour, but in the aftermath of the Trump chalkings and the subsequent protests three weeks ago, Emory College Republicans and Emory Young Americans for Liberty invited Yiannopoulos to speak.

Yiannopoulos has made a name for himself as a self-described advocate for freedom of speech. To some, his speech is a critical and powerful political commentary. To others, it is hate-speech. About twenty minutes before his talk started, the room had surpassed its maximum seating capacity of 120 people. By the time Yiannopoulos began speaking, around 250 total had gathered in White Hall. Some of those who could not enter the lecture hall attempted to listen from the hallway or to watch from an adjacent room, where the talk was projected onscreen.

Outside the building, protesters dressed in black carried signs expressing their concern for the values that Yiannopoulos’ espoused. The signs displayed phrases including, “Milo doesn’t speak for us,” “Emory No Place for Hate” and “Emory is nothing without women + POC [people of color].”

The protesters did not speak directly to Yiannopoulos at any point.

“We are encouraging people to not engage with [Yiannopoulos], or at least to not listen to him — to not engage passively,” said College junior Anais Hussung, who protested at the event. “His standard critiques of [politically correct (PC)] culture [and his] arguments that college students are too sensitive … are all just used to delegitimize the grievances of oppressed peoples.” 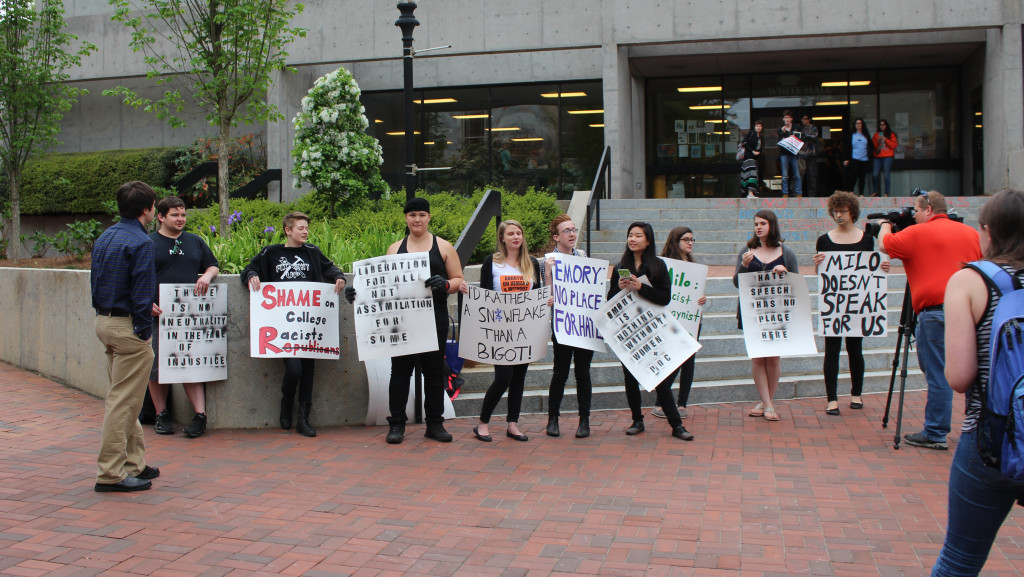 This sort of opposition is not new to Yiannopoulos, who has caused consistent controversy since he entered the public eye in 2014 with his commentary on “Gamergate.”

Before the talk, members of Emory College Republicans handed out signs with messages such as “Socialism Sucks” to the large crowd in the lobby. Several members of the crowd wore hats bearing Donald Trump’s campaign slogan, “Make America Great Again.”

Jake Maddineni, College junior and incoming president of Emory College Republicans, Nicholas Vidger, College freshman and freshman representative for Emory College Republicans and Alex Reibman, College senior and president of the Young Americans for Liberty, addressed the crowd before Yiannopoulos spoke. Maddineni asserted that “the protesters out there, they don’t represent Emory as a whole,” causing the audience to break into applause.

Yiannopoulos’ speech addressed a number of topics, including “bullying tactics of the political left” and “PC culture.” He made comments critical of women, racial minorities and members of the LGBT community throughout his talk.

Yiannopoulos discussed his perception of the thought process of many liberals, stating that personal attacks against dissident speakers and “feelings,” have replaced logical arguments and evidence in debate. He said that he supports Republican presidential candidate Donald Trump for that reason, adding that “[Trump] wants to fix the freedom of speech problem in this country, and we can’t fix anything else until we fix speech.” 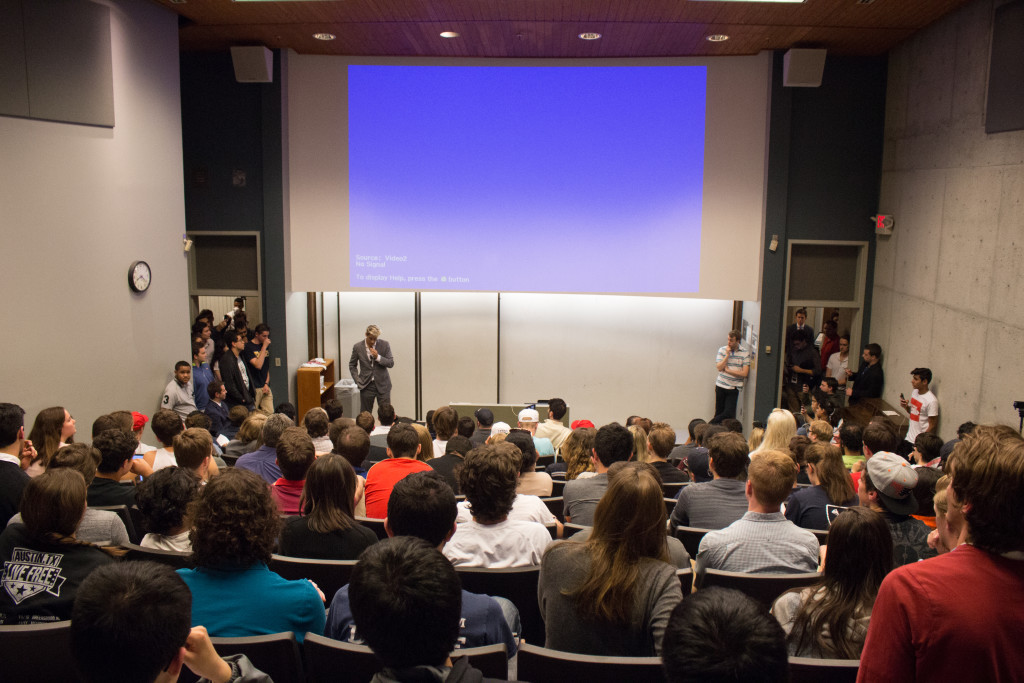 Yiannopoulos also criticized the left’s “bullying” tactics, which he describes as an effort to discredit dissenters by declaring that they are “racist, sexist or offensive” instead of debating the ideas they present.

While over-sensitivity among younger generations is a great concern, the failure of democracy itself presents a larger problem, Yiannopoulos said.

“Democracy doesn’t really work right now,” he said. “The press lies to us; both conservative and liberal media lie to us. Democracy doesn’t work when people can’t make informed decisions — and that can’t happen when the media is lying to us every day.”

He also addressed single-mindedness on college campuses and at Trump rallies, mentioning that anti-Trump activists consistently seem to be forced out of rallies and attacked by Trump supporters. 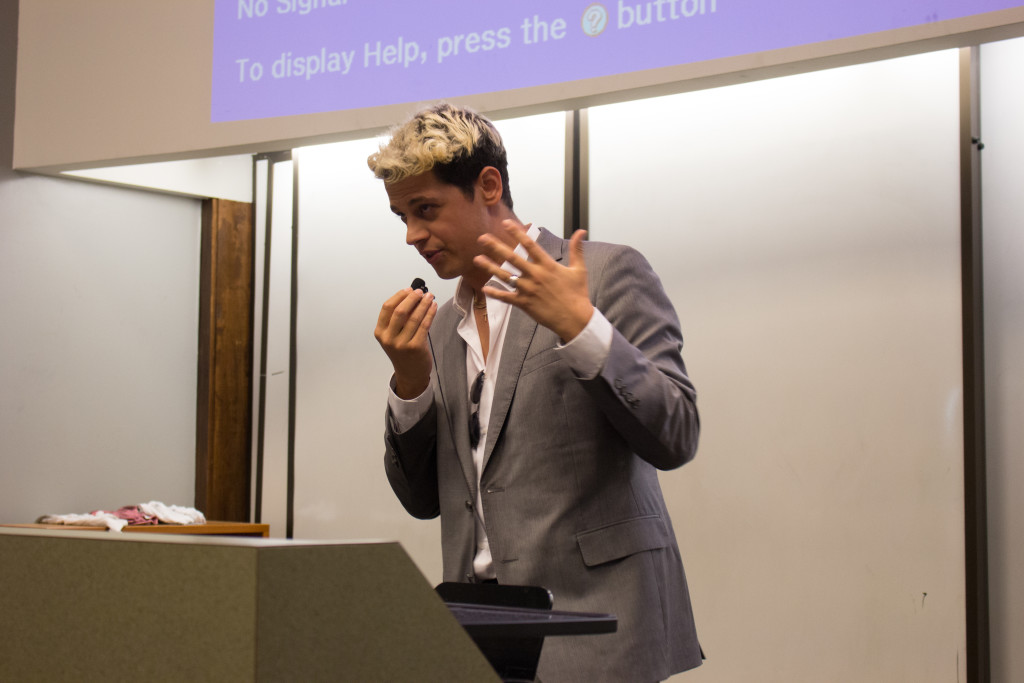 While Yiannopoulos said he does not believe that effective discourse is possible in the media given its current state, he also said that he believes that college campuses are a place where discourse could occur in the future. While he does not believe that these conversations could happen today, Yiannopoulos said that he hopes his talks and visits to colleges to prove helpful in facilitating future discussions.

The British activist became interested in visiting Emory after the protests that followed the Trump chalkings, according to Adam Woodward, an Emory Law School student and the treasurer of the school’s Federalist Society.

“Milo reached out to Emory as a whole via Twitter following the Trump chalkings a few weeks ago,” Woodward said. “While we [the Federalist Society] couldn’t host him, as he doesn’t exactly mesh with our mission, I passed it along to the Young Americans for Liberty and the Emory College Republicans, and they invited him.”

After the talk, protesters outside White Hall chanted, “This is what democracy looks like.”

“It is absolutely what democracy looks like, it’s the only correct thing they say — [the protesters]  absolutely have a right to protest,” Yiannopoulos said in an interview with the Wheel. “However, what they don’t do very well is allowing the other person to be heard, too. They’re all about democracy and freedom and freedom of speech for themselves, but they don’t much like diversity of opinion.”

His opponents however, argue that his speech is bigoted.

Yiannopoulos’ response is that his language has a purpose.

“Maybe I’m demonstrating my point — about how facile it is, you know, and how easy it is and how ultimately meaningless and unproductive [insulting people] is, you know,” he told the Wheel. “Sometimes I do that. Sometimes I precisely do that.”

“He wants to show people that the best way to debate issues is to engage and then counter, rather than call for censorship,” said Woodward.

Others were hesitant to endorse Yiannopoulos’ visit. College senior Amelia Sims, the outgoing president of Emory College Republicans, said she doesn’t want her name associated with bringing Yiannopoulos here. She went as far as to say that she wants to “wash her hands of this [Yiannopoulos’] event,” claiming that the way he expresses himself is offensive and rude, not rational.

“The purpose of freedom of speech is to support the free exchange of ideas,” Sims said before the talk. “Just because you have the right to say something offensive doesn’t mean that you should.” 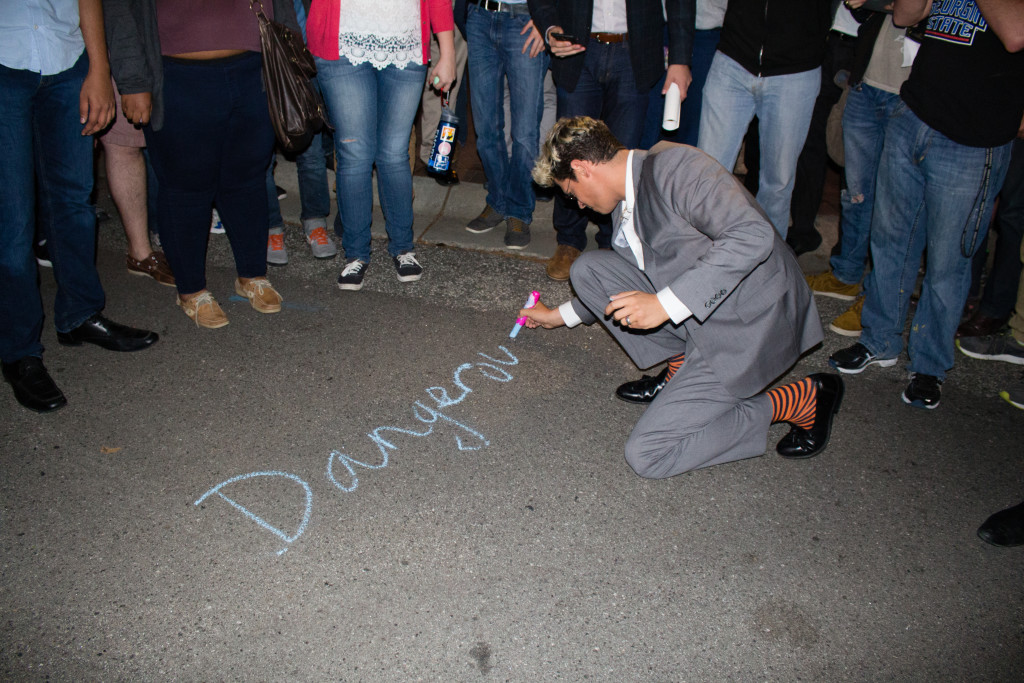 After leaving White Hall, Yiannopoulos brandished a bag of chalk, passed out pieces to the crowd and made his way to Asbury Circle with a swarm of about 50 at his heels. He then proceeded to chalk “Dangerous Faggot xox,” on the ground, and was met with cheers and applause. 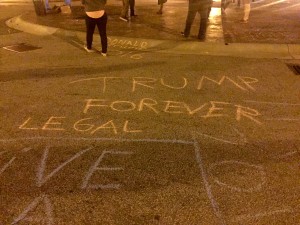 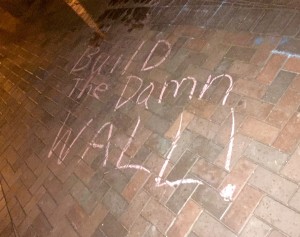 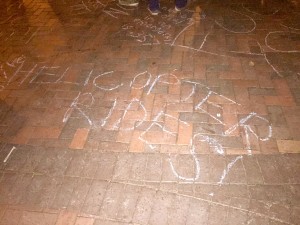 Yiannopoulos’ chalking inspired some of those who followed him from White Hall to begin writing their own messages on the ground, varying from “Trump forever legal” to “Helicopter rides.” As he left Emory, people continued to chalk messages on the Asbury pavement in what has become a now familiar scene on campus.