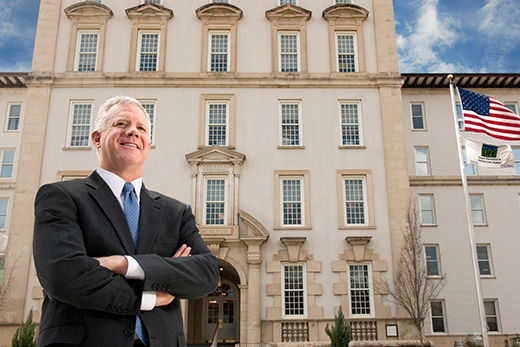 Michael Mandl will transition out of his role as Emory’s executive vice president for business administration today after 13 years of leading the University’s financial initiatives, he said in an interview with the Wheel.

Peter Barnes, who currently serves as Emory’s vice president for human resources, will serve as interim executive vice president for business and administration, Mandl said. Barnes has worked at Emory for 11 years and expressed confidence in University operations.

Mandl plans to create a client-driven company with Jack Tillman, who will transition out of his own role as Emory’s associate vice president for corporate development. The company, titled Mandl & Co., will “help institutions identify opportunities and then actually help to execute them,” Mandl said. “We want to be part of the leadership and part of the institution and help guide them through taking action and getting things accomplished.”

Both Mandl and Tillman will maintain relationships with Emory through Mandl & Co., which will be headquartered in Midtown Atlanta, Mandl said. He added that he and Tillman plan to remain involved with identifying Emory’s financial opportunities and suggesting strategies for asset allocation.

University President-Elect Claire E. Sterk addressed the future of Emory’s partnership with Mandl & Co. in an all-Emory email. “I am pleased to report that Emory will contract with Mandl & Co. in order to have access to [Mandl’s] unique ability to identify value-creating opportunities that advance the institution’s mission,” Sterk wrote.

During their time at Emory, Mandl and Tillman worked together on various high-priority projects, including the construction of Emory Point and the development of the Library Service Center (LSC), a collaboration between Emory and Georgia Institute of Technology. Mandl said he considers the University to be a “fundamentally different place” as a result of the implementation of such projects.

Of Mandl’s work on over 20 other projects, the development of the Emory Sports Medicine Complex stood out to Jon Lewin, executive vice president for health affairs at Emory and president, CEO and chairman of the board for Emory Healthcare. “[It was] like watching an artist to see [Mandl] work through the details of that deal,” Lewin said. He added that he would describe Mandl as a “consummate businessman … and a great negotiator.”

As Emory enters the 2016-2017 academic year, Mandl said that he expects to see a focus on the development of programs for faculty and students over the next few years. “I think that’ll be the primary emphasis of investment … as opposed to [construction],” he said.

While Barnes said it is too early to discuss new programs or directions, he wrote in an email to the Wheel that he is “familiar with all aspects of the business [function] and with the expertise, capacity and skills of [his] colleagues.”

“My primary goal is to build upon [Mandl’s] legacy and to support the new [University] president by leading a team of very talented, experienced and successful professionals in supporting our faculty, students and staff,” Barnes added.

Barnes noted that his most significant and personally rewarding undertakings included his work with the Work-Life Initiative Task Force, which encourages balance in the lives of Emory community members. Serving as the group’s co-chair, Barnes led initiatives that served “to strengthen a work-life culture that sustains personal growth, encourages professional development and enhances community and family life,” he wrote.

Lewin has also worked with Barnes, and described him as a “master of human resources management” who will “help carry the University through until the appointment of a formal EVP for business and administration.” Sterk will lead this search, which is still in its early stages, Lewin added.

Mandl, who has collaborated extensively on projects with Barnes, described the appointment as “a wise choice.”

“[Barnes] cares deeply about Emory, [and] is committed deeply to its people and its mission,” Mandl said.