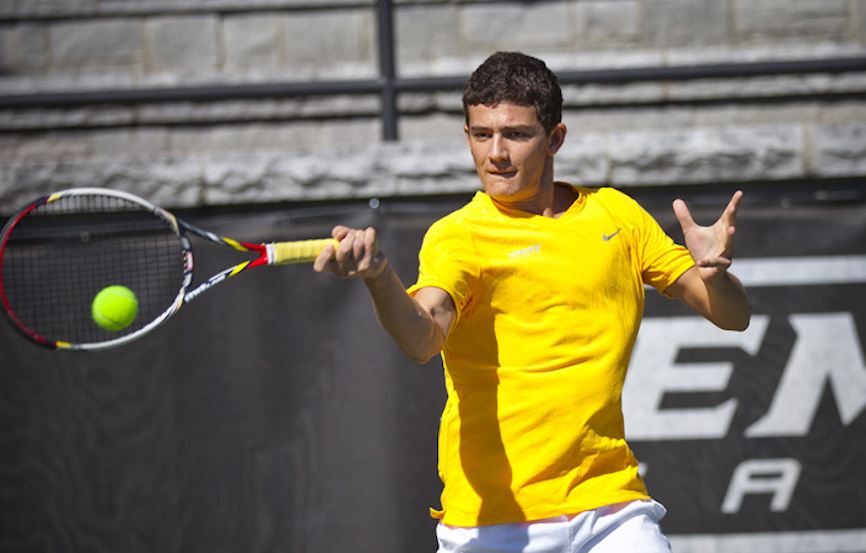 The No. 1 Emory men’s tennis team defended their University Athletic Association (UAA) Championship in Altamonte Springs, Fla. over the weekend by beating New York University, Carnegie Mellon University (Pa.) and Washington University in St. Louis (Mo.) en route to the trophy. The championship is the Eagles’ 25th victory out of 29 tries.

The championship tournament pitted the top eight teams in the UAA against each other in a single-elimination format to decide the champion of the conference. The tournament featured third-place, fifth-place and seventh-place games, as well.

Sophomore Scott Rubinstein and freshman James Spaulding led with a 8-5 win on the No. 1 doubles court. In addition, the teams of senior Rafe Mosetick and freshman Jonathan Jemison and sophomore David Omsky and sophomore Andrew Harrington both coasted to their fifth straight doubles victory by winning 8-1 and 8-3, respectively.

Going into singles competition, freshman Adrien Bouchet was confident that the Eagles would be successful.

“We had a team meeting, and we had been telling each other what we were training for all year,” Bouchet said. “We were so ready to fight in singles.”

The next afternoon, the Eagles defeated Carnegie Mellon by the same score: 8-1.

While the No. 1 doubles team of Rubinstein and Spaulding lost their match 8-6, the teams of Mosetick and Jemison and Omsky and Harrington both won their matches by scores of 8-6.

“Our results show how much we wanted it,” Bouchet said. “Our captain [Mosetick] really got us pumped up for this match, and it really worked. Watching the other freshmen play, I could tell that they were really focused and had a lot of energy.”

The team did not have time to celebrate, however, as the championship game was at 9 a.m. the next morning.

After discovering that they would face off against Wash U in the final, sentiments were vengeful, given Emory’s loss to them last year at NCAAs.

“Knowing that they’re our biggest rivals, we really, really wanted payback,” Bouchet said. “We lost to them in NCAA’s last year, so we wanted to assert our dominance and get payback.”

Emory got their revenge in the end. Despite going down in the match 2-1 after doubles, the team won five of their six singles matchups to defend their UAA Championship.

The team of Rubinstein and Spaulding lost a tight, tie-breaker game in the No. 1 doubles court 9-8 (7-4). The team of Mosetick and Jemison rebounded to win the No. 2 doubles court 8-5, their eighth straight win to end the season.

“I look to [Mosetick] as a leader,” Jemison said. “He keeps me calm on the court when I get upset after missing a shot. He also motivates me to keep fighting when we get down.”

Omsky and Harrington fell 8-6 in their No. 3 doubles matchup to put the Eagles behind 2-1.

In a few hard-fought singles games, the Eagles bounced back to seal up the UAA Championship.

The Eagles finished the year 20-3 following their UAA Championship win.

“I can’t wait for nationals,” Jemison said. “I want to win it for the team and for the school. It’s been a long time since we’ve won one, and I know this team can do it.”