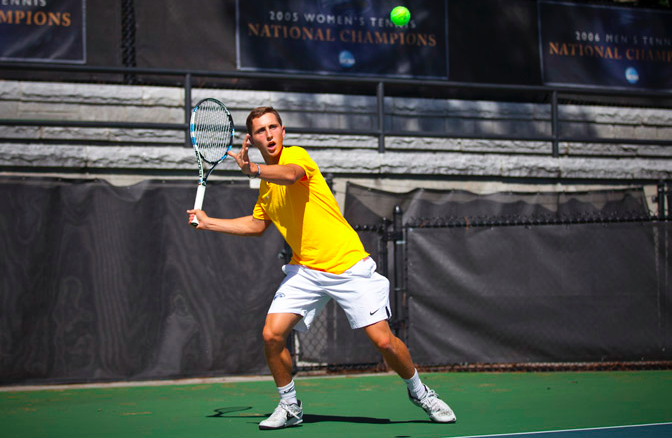 While many Emory students were relaxing at home during spring break, the men’s tennis team took a trip to Southern California. However, they weren’t there on vacation. In fact, they were hard at work competing in the Stag-Hen Invitational, where Emory went up against the top 11 ranked teams in the country. The Eagles entered the tournament at 7-2 on the season, with the goal of defending their no. 1 spot in the rankings.

After arriving at Claremont Mudd-Scripps on Friday, the Eagles beat the No. 6 Case Western Reserve University (Ohio) in a 6-3 decision. Senior team captain Rafe Mosetick—the No. 2 ranked singles player in Division III—led the way with the first victory of the tournament, winning the first singles matchup and later winning in doubles with his partner, freshman Jonathan Jemison. Mosetick was undefeated in the tournament as a whole, winning every match he played in, including a win over the no. 3 ranked singles player in Division III.

The second day of the tournament saw the Eagles beat two top-15 ranked teams: Claremont Mudd-Scripps (Calif.) and Pomona-Pitzer (Calif.). The Eagles first built on their day one victory by defeating the no. 2 ranked Claremont-Mudd-Scripps team in a 7-2 decision. Jemison and sophomore Andrew Harrington bounced back after struggling against Case Western the day before, winning in both singles and doubles. Later in the day, the Eagles faced off against and outplayed the no. 11 ranked Pomona-Pitzer team 6-3.

Like Mosetick, freshman Adrien Bouchet and junior Aman Manji also ended the invitational without any losses in singles. Bouchet and Manji played in the third and fourth slots respectively for the Eagles.

The team’s dominating showing earned them the tournament victory, and moved their record on the season to 10-2. Emory will return to the court on March 20, when they host Millsaps College (Miss.) and Centre College (Ga.).