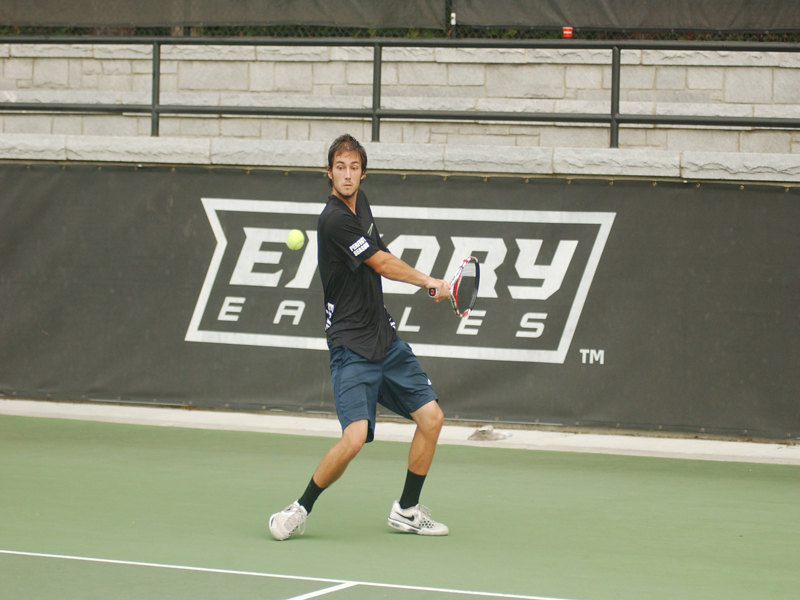 Head Coach John Browning was satisfied with his team’s performance at the championships.

“I thought it was a great tournament,” Browning said. “We had both the singles and doubles, three out of the four semifinals were with Emory players.”

The Emory team battled and fought hard to claim the singles championship and runner-up in doubles.

“This past weekend, the team showed great heart,” junior Eric Halpern said. “It was great to see the freshmen battling out there for the first time.”

The tournament featured top players from Division III schools in the region. Emory had three of the top eight seeds with Halpern as the number two seed, junior Ian Wagner as the third seed and sophomore Rafe Mosetick claiming fourth seed.

Emory had five doubles competing in the A Draw of the event with the team of Wagner and Mosetick drawing the top seed.

On the first day of play, the Eagles came through with a solid performance. Ten Emory players won their opening two round of singles competition in the Main Draw. Halpern played two matches winning his first 6-1, 6-1 against Blake Nuwayhid of Birmingham-Southern and won his other 6-1, 6-4 against John Dangerfield of Methodist University (N.C.).

Emory fared equally well in doubles on the first day with four teams earning berths in the quarter finals. Wagner and Mosetick highlighted the effort winning both of their matches. The teams of Halpern and Lavoie-Perusse, Manji and Szczurek and Isaacs and senior Ayush Bajoria also advanced.

“I think this tournament set the tone for the whole year, and we have a really hard working young group of players who understand how important practice and preparation is,” Browning said. “I think it paid off in this tournament.”

Mostick picked up two wins on Saturday topping teammate Szczurek 6-2, 6-3, and Duncan Miller of Methodist, 6-4, 6-4. Halpern earned his spot in the draw by beating teammate English 6-2,6-2, and Wagner advanced by beating Lavoie-Perusse, 6-2, 6-4.

“The fall invitational is never easy because it’s one of the only times of the year where teammates play teammates so things can get a bit dramatic,” Halpern said.

The Emory men’s tennis team claimed the USTA/ITA South Regional singles championship as Eric Halpern battled his way to a pair of come from behind victories on Sunday.

Halpern became the seventh Emory player in the past eight years to win the crown. Halpern defeated his teammate Mosetick 3-6, 7-6, 6-2 in the title match.

“We all worked real hard the past two weeks, so it was great to capture the singles title,” Halpern said.

Halpern advanced to the finals by winning a very close match against his teammate Wagner in the semifinals 1-6, 6-4, 7-5. Mosetick earned his sport by disposing the defending champion and number one-seed Robert Kjellberg of North Carolina Wesleyan 6-1, 6-3.

“I think Rafe showed that he can play by beating one of the best players in the country.” Browning said.

The coach was very happy with the performance of his players.

“Halpern played eight matches on Friday and Saturday and played six sets of tennis with a doubles final on Sunday,” Browning said. “I’m amazed. He is just a really tough kid. It was hot, and when you’re playing your teammates, it is stressful.”

The Eagles’ attempt for a sweep fell short in doubles as the North Carolina Wesleyan duo of Johan Lundahl and Kjelberg defeated Halpern and Lavoie-Perusee 8-4 in the championship match.

The stress of the matches even took its toll on Browning.

“When you’re playing your teammates it is stressful,” Browning said. “It is not easy, not for anybody, not even for me.”

The singles and doubles champions from this weekend’s tournament advance to the Oct. 10-13 ITA Small College Championships in Fort Myers, Fla.

–By Alexander Del Re