Emory has much to offer prospective students, including its elite academic atmosphere, a productive social environment and some not-so-renowned sports teams. All jokes aside, it is the general consensus that nobody chooses to attend Emory purely for our sports teams.

Nevertheless, as a NCAA Division-III school, Emory does its best to remain competitive. This is effectively seen through Emory’s men’s and women’s swimming and diving teams, which each hold 18 University Athletic Association (UAA) team titles under their belt. Most recently, the team defeated reigning Division-II champions Queens University of Charlotte (N.C.) for their first dual meet victory of the season. However, while the women’s team holds seven consecutive NCAA championship titles, with a potential eighth in their reach this year, the men’s team’s first NCAA championship in history is definitely on their radar.

“We have a team that’s still working on getting better but the talent is there,” Head Coach Jon Howell said. “They’re working hard, staying motivated and moving in the right direction so we definitely have a shot.”

The fact that the men have not yet won a championship by no means discredits their athletic capabilities. For the past 13 seasons, Emory’s men’s swimming and diving team placed in the top three at the NCAAs. So why is this the year they believe the victory is theirs for the taking? The answer lies within various factors, the cumulation of which may lead the Emory men into the waiting arms of an NCAA championship title.

First, already swimming at high levels with still so much room to improve, the new  freshmen have proved valuable additions to the team. Among the fresh talent is freshman Sage Ono, who placed first in the 200 backstroke at both the Queens and Savannah College of Art and Design (SCAD) (Ga.) meets, as well as in the 400 medley relay at Queens. Freshmen Evan Brock and Chandler Vandiford have also proven their worth, obtaining the top spot in the 200 medley relay and 200 backstroke, respectively, at the SCAD meet. Also very promising is freshman Trevor Burke, whose dive performance at the Sewanee Invitational advanced him straight to the national championships.

And while the season brings in the new, it isn’t out with old for the Eagles. Much of the team’s success is tailored to the unadulterated athleticism of Emory’s returning swimmers. Even before the official 2016-17 season commenced, collegeswimming.com selected six Emory returners for their preseason all-American list. The honors went to seniors Christian Baker, Mitchell Cooper and Andrew Wilson and juniors Thomas Gordon, Oliver Smith and Cooper Tollen. Wilson’s return to the Emory pool itself augments the team’s competitive edge. Having taken a year off to train for the 2016  Olympic Trials–he narrowly missed qualifying for Rio– and seizing two U.S. Open Swimming national titles, Wilson’s return to the men’s team as such a high profile athlete adds not only to the team’s talent pool but also to the team’s morale.

Emory men’s swimming and diving team’s vigourous training in and out of the water, bearing higher intensity than in previous seasons, is also a factor contributing to their powerful performances this season, as seen through their currently flawless 2-0 record. But whether it be during training or during competition, the strong team dynamic and sense of brotherhood among the athletes is uncanny. Despite their individual performances, the guys show full of support for one another, and this mutual encouragement is a driving force in the team’s overall success.

“A big ingredient to our success is our shared experiences. The guys take a lot of strengths from each other,” Howell said. “As a group, they are able to accomplish some things that they might not be able to as an individual and that camaraderie is a big part for us.”

Mentality is also a contributing factor as, under Howell’s invaluable instruction, the men dive into each competition not focused purely on winning. Instead, they strive for improvement in preparation for competing at the highest levels at nationals.

However, qualifying for nationals is the essential next step, and many swimmers will be competing at the Miami Invitational in Oxford, Ohio, Thursday through Saturday, getting one step closer to achieving the well-sought-after NCAA championship title. 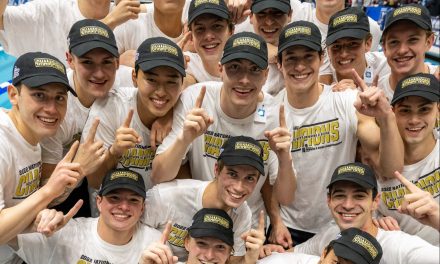 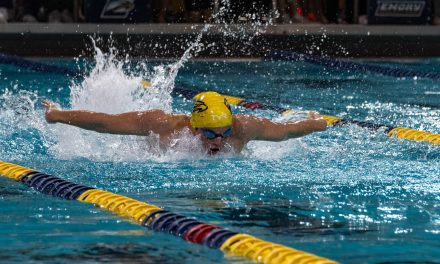 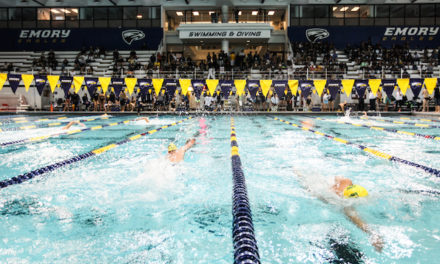