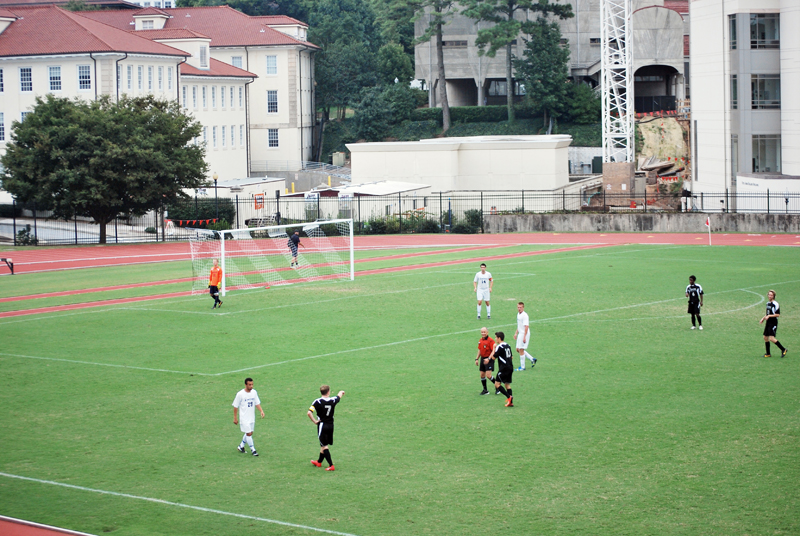 Rheaume scored the first goal of the game in the seventh minute of play after receiving a cross from freshman forward Max Gomas. Panthers keeper Jonas Heidrich saved Rheaume’s first shot on goal; on the rebound, he was able to get past the keeper. This was Rheaume’s third goal of the season.

Emory held the lead at 1-0 for most of the first half of the game until Panthers player Johannes Loeffler shot the ball into the back of the net past Emory goalkeeper Abe Hannigan. Moments after, Jones was able to regain Emory’s lead again with an assist from Rheaume ending the half at 2-1. Emory finished the half with 11 shots, five of them on goal, while Birmingham-Southern only finished with eight shots with three of those on goal.

In the 57th minute, Emory increased its lead to 3-1 with Ragazzo’s first career goal. Jones initially had a corner kick to set the play up, but the ball was then pursued by Andrejchak to send a loft cross to Ragazzo. This is the third assist of Andrejchak’s season. In the 77th minute, Panthers player Brooks Busby headed the ball past Hannigan, bringing the score to 3-2.

“Our performance last night was excellent. We really worked together as a team to score those goals,” Andrejchak said. “We got very unlucky in allowing the two goals to go in. But overall, our team did a great job, and we will work hard at practice the rest of this week to be ready for Saturday’s homecoming game.”

The Eagles had 18 shots with 10 on goal, while the Panthers finished with 14 shots with five on goal. This weekend, Emory will face a home game against Millsaps College (Miss.). The game is at 11 a.m. this Saturday, Sept. 28 as a part of University’s Swoop’s Week festivities.