This past weekend, the men’s soccer team continued their undefeated streak, improving to 4-0-0 after beating Averett University (Va.) and Guilford University (N.C.).

In the game against Averett, Emory junior forward Dylan Price scored the game-winning goal to help the Eagles win 3-1 on Friday, Sept. 6. In the 23rd minute of play, midfielder Michael Rheaume, Emory junior, scored from a play assisted by Price.

Christopher Jordan and Martin Erenstedt, Averett Cougars, worked together to tie the game until Emory took the lead in the 72nd minute of play with Price’s fourth goal (assisted by junior defender Jeffery Cochran) in three games this 2013 season.

This left the score at 2-1 with the Eagles winning. The Eagles finished the game with a 4-0 win after a final goal in the 85th minute.

Emory had 20 shots (9 on goal) while Averett had 6 shots with only 3 on goal. Sophomore goalkeeper Abe Hannigan had two saves and earned another win to now stand at 3-0-0.

The Eagles continued their road trip on Sunday, Sept. 8 at Guilford College in the afternoon with another shutout of the season. Morgan and Price scored for the Eagles to help the team win 2-0 over Guilford.

Eagles defense lead by sophomore Matt Sherr, junior Noah Rosen, sophomore Leo Ragazzo and Cochran, played a great game limiting the Quakers to 5 shots game with only 2 on goal. Emory has a .75 team goals-against average with a total of 21 shots in the 4 games of the season with 10 on goal.

Hannigan played the entire game, a total of 90 minutes, making this his second individual shutout of the season.

In the first half of the game, the Eagles scored in the 42nd minute of play with Morgan’s first collegiate goal.

Guilford cleared the ball, and Morgan scooped it up from the 18-yard box to score. He is at 5 points this season and holds team-best at three assists this season. The first half ended with a strong presence from the Eagles over the Quakers in shots, shots on goal and corner kicks.

The second half remained static at 1-0 for the majority of play until Price scored again in the 88th minute. Price captured the ball midfield with a long, leading pass from Cochran to score a low shot one-on-one with the Guilford keeper. Emory had 21 shots (9 on goal) while Guilford had 5 (2 on goal).

Price now has 5 goals, an assist and stands as leading Emory scorer with 11 points.

He has 24 career goals making him tied in Emory school history with Charles Strauss for 19th place. His game-winning goal in the game against Averett marked his second-straight contest with the winning goal.

This is the 10th game winning goal of his career and he holds the third highest record in school history.

This is the 13th time in school history that Emory has opened the season with 4 consecutive wins. Guilford dropped to 1-2-1, and Averett dropped to 0-2-1. “It was an exhilarating feeling scoring my first college goal,” Andrejchak said. “They were good competition. Hopefully we can keep up the 4 and 0 start and build off of it.”

The team will now head to Oglethorpe University to play the Stormy Petrels on Thursday, Sept. 12 at 4 p.m. 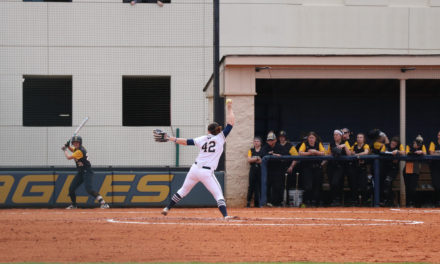 Eagles Get Into the Win Column with Series Win