The Emory women’s basketball team’s nine-game win streak came to an end after two losses to the UChicago Maroons and the WashU Bears. The Eagles played the Maroons on Jan. 31. UChicago held the lead for the majority of the game, despite the Eagles’ coming within one point of UChicago on five separate occasions in the third quarter. In the fourth quarter, UChicago held a seven-point lead before the Eagles went on a 5-0 run. Down 74-71 with less than four minutes remaining in the fourth quarter, the Eagles did not score for the remainder of the game. Senior guard Allison Chernow led the Eagles in scoring with 16 points, while senior forward Erin Lindahl scored 14 points on 5-10 shooting from the field, 4-6 from three and had seven rebounds. This, however, was not enough to overcome UChicago’s starters, who all scored in double figures, with sophomore forward Klarie Steffens leading the way with 17 points. UChicago handed the Eagles their first University Athletic Association (UAA) loss of the season in an 80-71 defeat.

On Feb. 2, the Eagles traveled to St. Louis, Mo. to face the Bears. The Eagles found themselves down 34-43 after the first half, as the Bears had a dominant second quarter, holding the Eagles to only nine points. The Eagles, however, made a comeback in the fourth quarter. With four seconds left in regulation, Chernow hit a clutch three-pointer to send the game into overtime. With 11 seconds left in the extra period, the ball went back to Chernow, but the Bears’ sophomore forward Samantha Weaver contested the shot well, forcing Chernow to miss. Chernow led the Eagles in scoring with a season-high 23 points, while 14 of Lindahl’s 16 points came during the second half and overtime. Sophomore forward Tori Huggins recorded her seventh double-double of the season, scoring 16 points and grabbing 10 rebounds. However, the efforts of the Eagles were not enough to overcome the efforts of freshman guard Molly Gannon, senior forward/center Kristina Schmelter and freshman forward Maya Arnott who scored 62 of the Bears’ 85 points. After the close of overtime, the Eagles fell 83-85. Emory currently sits second in the UAA standings behind UChicago. The Eagles will rematch both UChicago and WashU in their next two home games on Feb. 7 and 9, respectively.

The No. 6-ranked Emory men’s basketball team won both their away games this past week, increasing their win streak to four. The Eagles first played UChicago and took an early lead in the first half, and did not hold back for the remainder of the game. Though they held a 13-point lead, a small comeback by UChicago narrowed the deficit to nine going into halftime. The Eagles came out with high energy and, after nine minutes of play, held a commanding 62-47 lead. They finished the game with an 83-66 victory. Junior forward Matt Davet led the Eagles in scoring with 19 points on 7-12 shooting, while junior guard Matthew Schner recorded a double-double with 13 points and 12 rebounds.

On Feb. 2, the Eagles faced the WashU Bears. The Eagles’ offense was efficient, scoring 53.3 percent from the field during the game and an excellent 62.9 percent in the second half. Defensively, the Eagles held WashU to 30.3 percent from the field and 19.4 percent from three. All starting Eagles scored in double figures, with junior guard Romin Williams scoring 18 points on 6-8 shooting and 3-4 from three. Schner recorded a double-double, recording 15 points and a career-high 14 rebounds. The Eagles would go on to win 80-67. Despite the loss, Bears’ junior guard Jack Nolan led both teams in scoring with 19 points. The two wins push the Eagles to a 16-2 record and a 6-1 record against conference opponents.

The Eagles’ strong performances earned them the National Association of Basketball Coaches Division III Team of the Week Award. In response to winning the honor, Head Coach Jason Zimmerman said,

Along with the team award, Schner was named the UAA Men’s Basketball Player of the Week.

“Matt has been a valuable piece of what we do and he’s been very consistent throughout the year,” Zimmerman said. “His consistency really helps our team.”

The Eagles face UChicago and WashU again on Feb. 7 and 9, respectively, in Atlanta.

This past weekend, Emory’s men’s and women’s track and field teams competed at the Carolina Challenge at the University of South Carolina. The event did not score teams overall but rather evaluated individual performances. The meet hosted many talented teams from all three NCAA divisions. They included two of the Top 25 teams on the men’s side and the No. 10-ranked South Carolina Gamecocks on the women’s side.

Senior pole vaulter Isabel Saridakis led the Eagles by example, breaking her own program record in pole vault at 3.75 meters, earning herself the No. 9 spot at an invite-only event. In the open pole vault competition, freshman Ticia King came in No. 20, recording a jump of 2.86 meters. Five other women broke their personal records, with junior Laura Sheckter and sophomore Alex Devaux coming in No. 5 and No. 6, respectively, out of 38 entries in the open weight throw competition.

On the men’s side, junior Liam Fost finished No. 24 out of 141 competitors in the 400-meter run. Freshman Wheeler Wilson finished No. 15 out of 42 in shot put and No. 19 out of 28 in open throw. Freshman Ryan Ryu set a personal best in the triple jump, covering 12.89 meters, while senior Alex Rand had his personal best in the 400-meter run with a time of 51.50 seconds.

Both the men’s and women’s teams will be traveling to the Birmingham CrossPlex for the Samford University (Ala.) Bulldogs Invitation through Feb. 14-15. 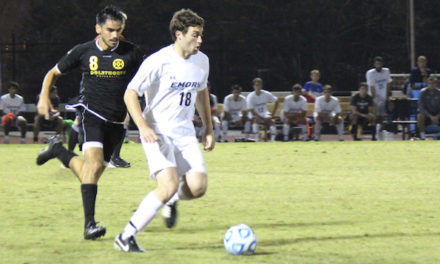