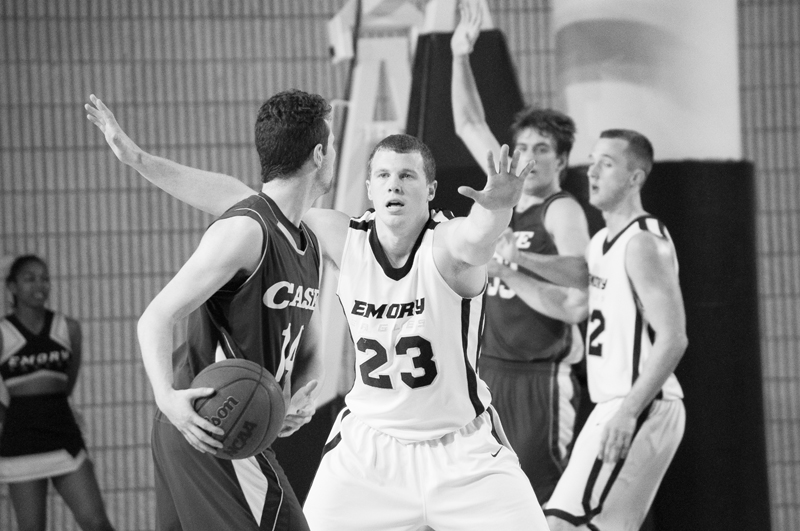 The men’s basketball team lost to both University of Chicago (UC) and Washington University in St. Louis (Wash. U) in University Athletic Association (UAA) play over the weekend. The Eagles now sit at a record of 12-6 overall and 4-3 in the UAA.

On Friday Jan. 31, Emory matched up with the 10-6 UC Maroons, who were able to use swarming defense to beat the Eagles 69-60. Emory’s 60 points in the game on Friday evening was their lowest total of the season.

The Eagles started the game strong, jumping out to an early 25-15 lead less than halfway through the period. UC kept coming at Emory, cutting the deficit to 33-28 before knotting up the score at the half 35-35.

The second half began with each team going on a strong run. The Maroons went on a quick 12-2 run out of the break to take a 47-37 lead, but the Eagles responded, going on a 12-1 run to take the lead 49-48. From that point on, UC stretched their lead to 60-50. The Eagles rebounded again, going on a 10-3 run to cut the Maroons’ lead to only three with fewer than two minutes remaining. However, that would be the closest Emory would get, as UC closed out the game, winning 69-60.

With only two players finishing in double figures, seniors Jake Davis and McPherson Moore, the Eagles shot just 37.1 percent from the field. Davis, who finished with 17 points, and Moore, who had 16 points, each had seven rebounds, but Emory was out-rebounded 44-35 by Chicago. A difference-maker in the game was second-chance opportunities; the Maroons worked the offensive glass to outscore the Eagles 19-6 on the second chances.

For the second game of the weekend, Emory faced off with the 15-2 Wash. U Bears, who entered the game ranked No. 7 in the country. The Eagles, who were down for the majority of the game, were unable to complete their impressive comeback, falling to the Bears 70-66.

The Eagles, unlike against UC, started the game slowly and found themselves in a hole 20-11 with over half of the period to go. Emory quickly woke up and recovered, going on a 15-3 run to take the lead 26-23. The Bears followed that with a 12-2 run of their own, and went into halftime up 35-28.

Down 46-36 in the second half, the Eagles went on a 10-1 run that had them within a point with just about 10 minutes remaining in the game. The Bears responded with two quick threes, before the Eagles displayed their resilience, going on an 8-2 run to cut the deficit to one again. The Bears, led by game-high scorer Chris Klimek who had 17 points, were able to close out the game despite Emory’s fight, winning 70-66.

Both teams struggled to score in the affair; each shot below 40 percent from the field, with Emory shooting a season-low 33.3 percent. Davis and Moore led the team in scoring again, tallying 15 and 14 points, respectively.

Also finishing in double figures for the Eagles was junior Michael Florin who had 10 points to go along with six assists. Emory was out-rebounded by Wash U. 42-40, but led in second-chance points 21-14.

The Eagles play next on Friday Feb. 7, when they travel to UC for a rematch and the beginning of a four-game road trip.

“Obviously you want to win them all, but you never know how the book is going to be written,” Zimmerman said. “[…] We’ve got to figure out a way to beat Chicago on the road.”