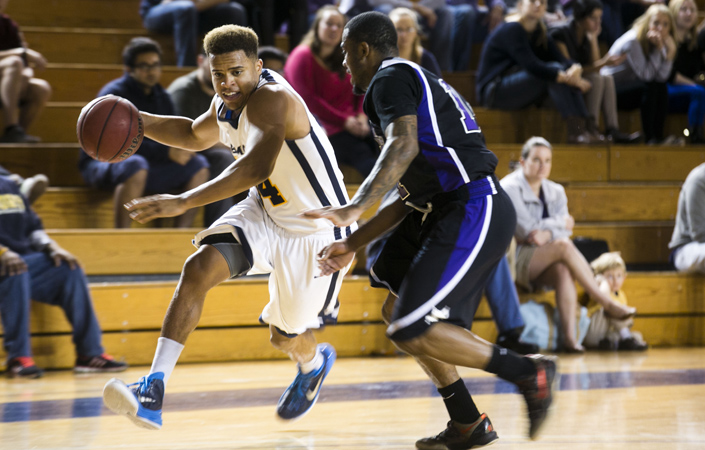 Following a disappointing opening loss to Covenant College (Ga.), the Eagles responded with a strong showing at the Guilford Invitational in Greensboro, N.C., winning their first game against William Peace University (N.C.) Friday 100-80 and then sealing the deal on a 2-0 weekend with a back-and-forth win over host Guilford College (N.C.) 69-66 in double overtime.

After struggling with turnovers and a poor shooting performance on opening night, the Eagles flipped the script Friday with an offensive explosion and a more efficient performance.  The Eagles shot a blistering 54.5 percent from the field and an even more impressive 44.8 percent from the three, scorching William Peace for 100 points, the Eagles’ first time breaking into triple digits since 2014. The Eagles took much better care of the ball as well, finishing with 11 turnovers on the night, half as many as the team totaled in their opener at Covenant.

Truth be told, the defense did not play a significant role on either side, with William Peace shooting an impressive 45.3 percent from the field and 42.3 percent from behind the arc. However, the Eagles dominated in the paint, outscoring William Peace 38-26. That, in addition to a much better turnover advantage, proved enough to give the Eagles a 100-80 victory.

“With the Covenant game, we were kind of throwing it away, and everyone was trying to play one-on-one and do their own individual thing,” junior point guard Whit Rapp said. “With William Peace, we were all playing together and getting each other open shots and that made all the difference.”

Despite a strong shooting performance Friday, those expecting a similar Saturday showing were likely disappointed. The contest against host Guilford was much tighter, with points difficult to come by for both sides. While shots were falling Friday, the stroke Saturday was not quite there for the Eagles, who shot 35 percent from the field and 30 percent from three.

“We scored 51 points at half on Friday night, and then we tied the game 51-51 at regulation on Saturday night,” Head Coach Jason Zimmerman said. “I was excited about the Guilford game because we weren’t making shots yet we were still grinding it out.”

Toughing it out was no easy task, as Guilford pushed the Eagles to the bitter end, through two overtimes no less. Down 50-51 in the closing seconds of regulation, junior center Christopher Avant secured an offensive rebound following a missed three from Rapp. Avant was then fouled with one second remaining, sending him to the line for two shots. Avant missed the first, but managed to get the second free throw to fall, tying the game at 51 and sending the teams into overtime.

The Eagles found themselves in a similar position at the end of the first overtime. Down 55-57, Avant again snatched a big offensive rebound and scored as time expired, saving the Eagles from defeat once again and forcing a second overtime tied at 57.

“We used [Avant’s] fire to get that victory,” senior forward Jim Gordon said. “When we needed him to make plays, [Avant] and others stepped up.”

The edge was with the Eagles in the second overtime, which ended with four straight points from Gordon to close the game and give the Eagles the 69-66 victory.

The win improved the Eagles’ record to 2-1 on the year, but also revealed a certain level of offensive inconsistency: the Eagles shot poorly in two of their first three games and struggled to win the battle inside the lane.

Despite some choppy play, Zimmerman remained optimistic about the team’s performances.

“I think it was a good learning experience for us,” Zimmerman said. “I don’t get too worked up about missing shots or making shots. I think we have good shooters and we will make [shots]. I get worked up about taking good shots.”

Rapp stressed how important it would be for players to work together and for everyone to fulfill their roles on the team, elements which proved crucial to this past weekend’s victories.

“It’s a learning process — seeing where you fit in, not trying to do too much,” Rapp said. “What’s key is to do your part to make the team better, rather than to just worry about yourself.”

The Eagles continue their season Saturday with another weekend of back-to-back games, first against LaGrange College (Ga.) and then Sunday against Maryville College (Tenn.).

“We are excited about where we are,” Zimmerman said. “We would love to be 3-0, but we have learned a lot in the first week, and I think we have gotten better because of the lessons we’ve learned.”