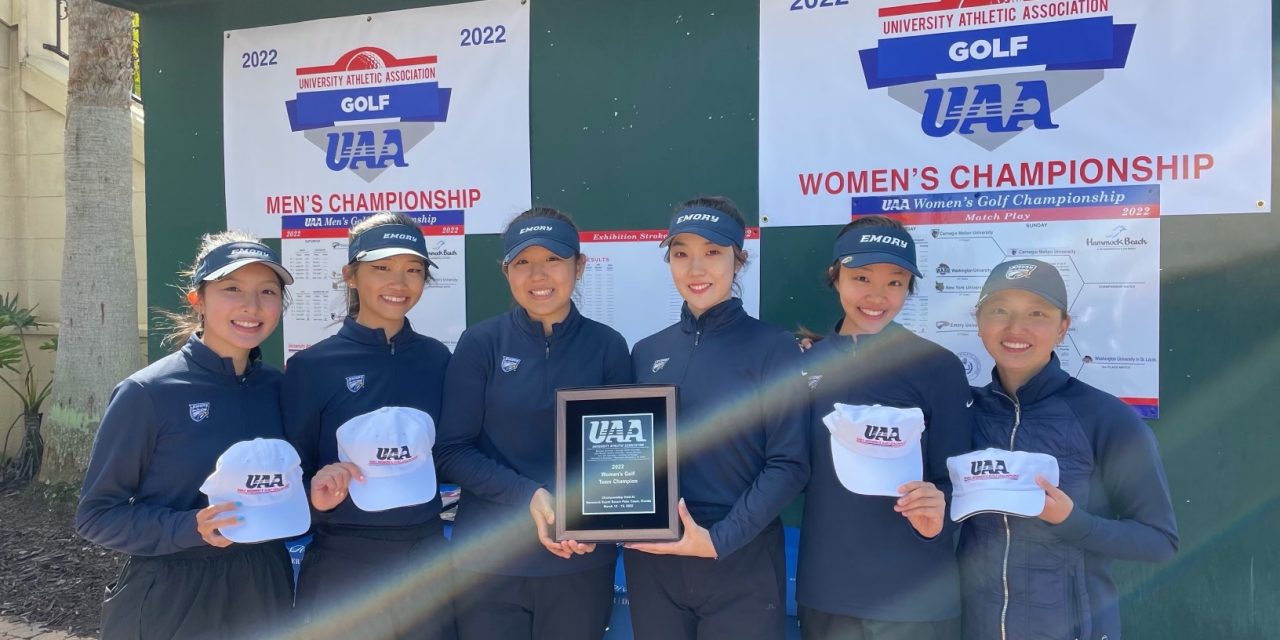 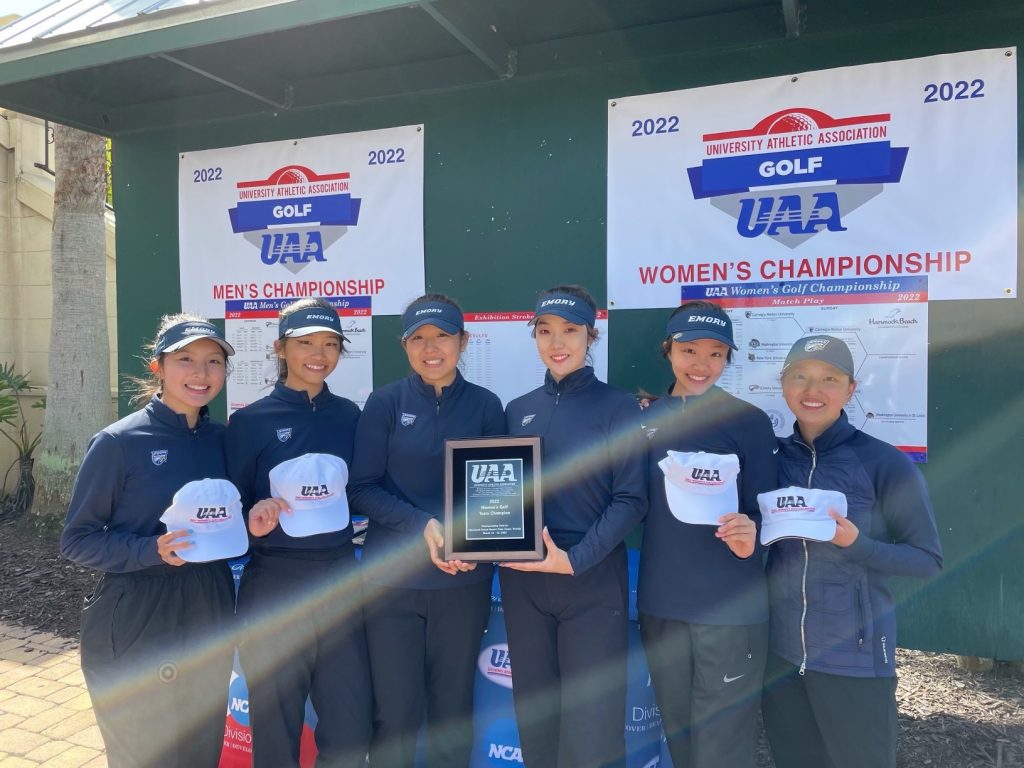 The women’s golf team poses with their UAA Championship trophy on March 13. (Courtesy of Ellen Dong)

Women’s golf head coach Katie Futcher had a lot on her plate when building Emory’s first women’s golf program from scratch in fall 2019. Still, she managed to fill the roster with seven promising freshmen, coach them to middle-of-the-pack finishes in their fall tournaments and prepare them to compete in the UAA Championship in March 2020. Then the pandemic hit, obliterating the team structure and causing all but one of the players to quit the team.

Although the Eagles on Futcher’s current roster are well-versed in playing junior and amateur tournaments, they have virtually no collegiate experience with three freshmen, three sophomores and only one junior on the seven-player roster. Given that five players are needed for a match, the mental and physical well-being of Futcher’s athletes is one of her top priorities. However, Futcher said that coaching a smaller roster is beneficial in that it allows her to fine-tune each player’s skill set and help them navigate their academics.

“Because we have a smaller team, we can be so much more individually focused on the needs of each player,” Futcher said. “Myself and my assistant are doing really well addressing and staying on top of each player’s tendencies and what they fall into in terms of pitfalls. [We are] really on top of managing their game and helping them understand what they need to pay attention to throughout the semester.”

Against all odds, the Eagles are excelling in their first full season. They placed first in three out of four of their fall tournaments, and are currently ranked second in Division III. Freshmen Ellen Dong and Sharon Mun and sophomore Irene Wang each won a fall tournament, and freshman Heejo Hyun was the top scorer for the Eagles at the Savannah Collegiate on March 7 to 8. Their sweetest victory came at the UAA Championship when they upset Carnegie Mellon, to whom they lost at the Savannah Collegiate. Dong, Mun and Wang all earned points for the Eagles and were named to the All-Tournament team.

Although it was difficult for Dong to dispel her nerves before tee off, she said that her coaches drove the team through the course the day before the Championship and advised them where to hit the ball. Relying on their guidance was key to remaining confident on such a big stage, Dong said.

“Definitely you’re nervous at first, but then I was thinking, ‘We [are] prepared for sure,’” Dong said. “I just told myself that we prepared, we know what we are doing and then we just have to focus on each shot. Then just [being] patient, and then just waiting for it, and then at the end I think, ‘Yeah, we got it.’”

Given that the Eagles lost to Carnegie Mellon by just four strokes a few days prior, Dong said she felt as though she and her teammates were up to the challenge presented to them at the Championship.

“Both Carnegie Mellon and Emory, we are right there [as equals],” Dong said. “You cannot say that Carnegie Mellon is better than Emory. I feel like we’re the same, so after last week’s loss, I felt like, it’s one tournament, right? It doesn’t really say anything. We just have to really work hard and then be prepared for the next one.”

Dong was also named the tournament’s Most Valuable Player, an award which she said validated all her efforts this season and at the Championship.

“It [was] a surprise,” Dong said. “It’s definitely a confirmation for my hard work in the past, and it’s also motivation for me to keep doing well both academic and athletic-wise and just do my best and then also contribute more for the team.”

Despite all the accolades the Eagles have accumulated thus far, Futcher said that she encourages her players to focus on beating their seventh-place finish at last year’s NCAA Division III Championships, which requires refining smaller details.

“My focus as a coach is always [to] come back to talking to all my players about the process, things we can control,” Futcher said. “What we can control are our attitude, our attention to detail, how we train, how we work in a practice round, how focused we are, the energy that we’re bringing to our teammates, our negative or positive comments. All of these things add up over time. 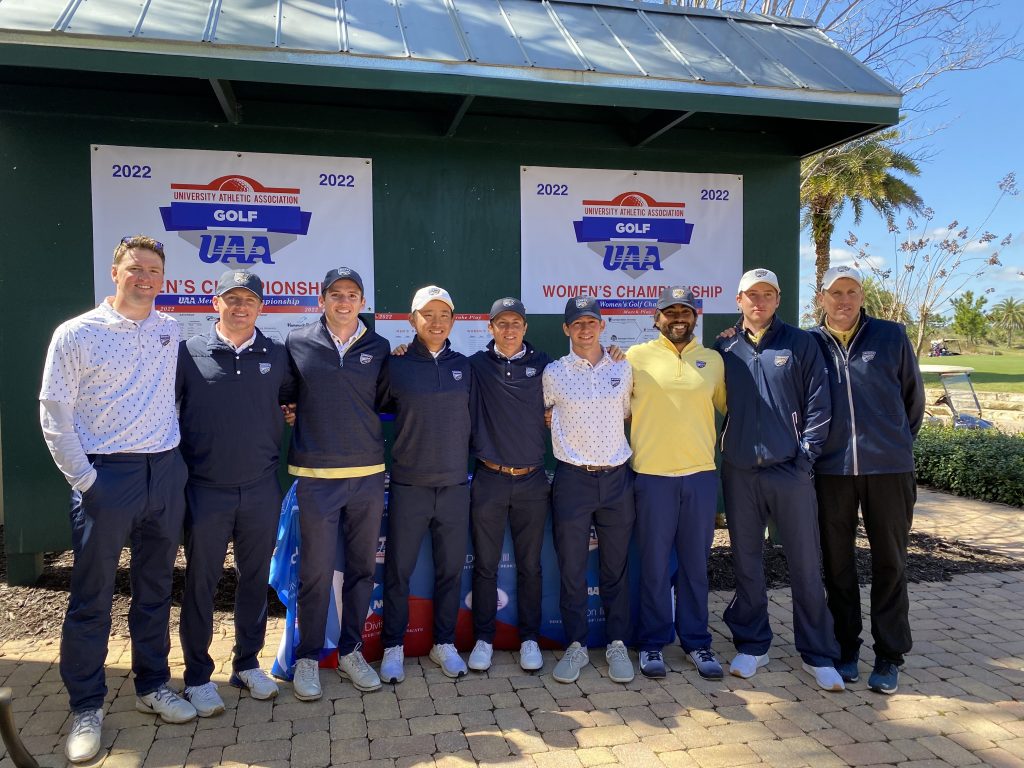 The men’s golf team poses for a picture after winning the UAA Championship on March 13. (Courtesy of Logan Ryan)

The men’s golf team is also in the midst of their first full season since 2019, and have displayed promising performances thus far. The team finished first in all but one of their fall tournaments and were ranked first in the nation prior to the start of spring play, garnering a whopping 17 first-place votes out of a possible 20.

While some teams prefer to ignore national rankings, men’s golf head coach John Sjoberg said that his players have done the opposite, gaining confidence from their placement at the top of the pack.

“They definitely take pride in it for sure,” Sjoberg said. “When they finished the fall ranked number one, I think that that’s a big deal to the guys. It shows their efforts are paying off and they have the ability to beat anyone anywhere, which is nice to know.”

The team’s depth is likely the primary reason the Eagles have established themselves as the team to beat. Six different players – fifth year Davis Hingtgen, junior Jackson Klutznick, freshman Tony Li, sophomore Michael Rosenbloom, senior Logan Ryan and senior Max Schwarz – have taken turns being the top scorer for the Eagles. Additionally, Hingtgen, Ryan and Schwarz, along with junior Grant Drogosch and sophomore Logan Lowery, were all on the squad that finished sixth at the 2021 NCAA Division III Men’s Golf Championships.

Sjoberg said that his players are constantly battling to capture a starting position, which has ultimately improved both the individual skill of each and the consistency of the entire team.

“This is probably the deepest, most talented group we’ve had,” Sjoberg said. “We’ve had seven different guys playing in the fall, and week-to-week, any of those seven guys can lead us. It’s been really good day to day at practice too, probably more so than anything. The competition, the drive to get better — you have to bring it day in and day out, week in and week out. Qualifying just to make the lineup, that makes us better.”

Despite being the clear favorites against No. 20 ranked NYU, every bit of the team’s talent was needed at the UAA Championship, where Li, Rosenbloom and Ryan earned points for the Eagles and were named to the All-Tournament team. Ryan said that their success in the fall semester made them a bit overconfident heading into the Savannah Collegiate, a mistake they focused on remedying before the championship match.

“We held onto the number one rank in the country for the entire first semester, so we came out expecting to be able to do the same thing in the second semester and I think we got punched in the face [at the Savannah Collegiate],” Ryan said. “Our mindset going into the tournament was that we needed to win this one, especially after the performance we had just a few days beforehand.”

This was the first year Ryan and the other seniors had played in the UAA tournament since their freshman season, and Ryan said returning to that environment for the last time was bittersweet.

“You kind of see the conference tournament as your prize tournament every year, and the fact that we didn’t even have it for three years, or even the ability to play in it, was pretty wild,” Ryan said. “It’s exciting to finally be playing in these big tournaments again, especially with every other school also having their full rosters back. Everything being more competitive makes it more exciting.”

As the Eagles set their eyes on a national title, they will certainly have a target on their backs. Even with plenty of talent to draw upon for the remainder of the season, Ryan said that the experienced players’ leadership will be essential to preparing the team to live up to the high expectations.

From Sjoberg’s perspective, an important part of preparing for nationals is learning to mentally handle how “fickle” golf can be. He said that mastering the fundamentals will give his players a reliable skill set even when they are struggling, helping them achieve the consistency that is a hallmark of a championship-caliber squad.

“We just want to be able to play in that last group on the final day,” Sjoberg said. “When you do that, you get a chance to win, which is a great position to be in.”