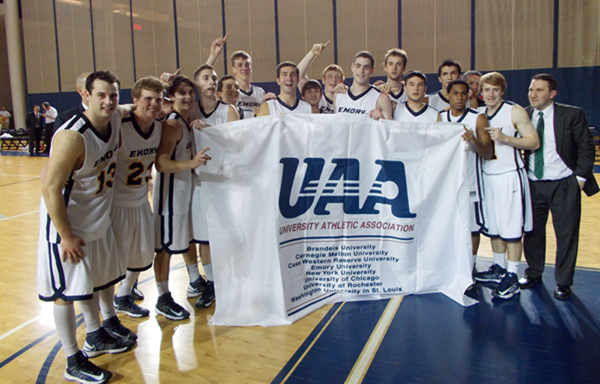 With a share of the University Athletic Association (UAA) title on the line, the men’s basketball team came up huge on Saturday afternoon, defeating the 13th-ranked University of Rochester Yellowjackets (N.Y.) 72-54.

The Eagles finished their regular season with a record of 19-6, including a 10-4 mark in UAA play. Their conference record ties them with Rochester and Washington University in St. Louis (Mo.) for the title.

The game was a rematch of the conference opener for both teams on Jan. 5, when Rochester pulled out a close 89-80 game on their home court. The Eagles got off to a hot start this time around, jumping out to an early lead with two quick layups from senior guard Nash Oh and senior forward Michael Friedberg.

The Yellowjackets kept pace, however, never letting Emory extend its lead beyond four points through the first 10 minutes of the first half. After Rochester knotted the score at 16 at the 8:08 mark, a jumper from sophomore guard Michael Florin followed by a three-pointer from senior guard Alex Greven gave the Eagles their largest advantage of the game.

It was Greven’s 39th straight game with at least one three-pointer. He had three on that day.

Free throws from Greven and freshman forward Will Trawick ran the lead to eight points. In the final minute of the half, Trawick added a layup while Greven nailed a three to run the lead to a commanding 32-20 advantage.

Both teams shot similar percentages in the first half, with Emory hitting about 38 percent (12 of 32) from the floor and Rochester shooting 36 percent (9 of 25).

The Eagles’ main advantage came from beyond the arc, where they shot nearly 42 percent (5 for 12) compared to the Yellowjackets’ 0 for 7 performance.

Greven led the team in the first half with 10 points, while Florin contributed four points and four assists.

Junior forward Jake Davis opened the second half with another three-pointer, then followed with a layup to put the Eagles up by 16. The Yellowjackets would not get closer than 10 points for the rest of the game.

Emory’s tough defense kept Rochester in check while the lead continued to get larger and larger. A Friedberg dunk at the 7:27 mark gave the Eagles a 20-point advantage that would hold up for the rest of the game before a Rochester three-pointer in the game’s waning seconds created the final 72-54 margin.

The Eagles heated up from the floor in the second half, shooting 56 percent as they stretched their lead and put the Yellowjackets away for good. The Yellowjackets struggled with Emory’s stifling defense all game as they shot only 32 percent on that day.

Greven led the team with 14 points, while Florin and junior guard McPherson Moore added 11 points apiece.Florin finished with a double-double with 10 assists. Friedberg, with eight points and 10 assists, came up a basket short.

The win – and the title – was a fitting way to end the Eagles’ Senior Day. Seniors Greven, Friedberg, Oh and Ollie Carleton were honored before earning the first UAA title of their careers.

Wash. U earned the UAA’s automatic bid to the NCAA Tournament by way of a tiebreaker, but the Eagles learned on Monday afternoon that they secured a spot and will play in the opening round against Randolph College (Va.) on Saturday, March 2.