Men Advance to Post-Season Play for First Time Since ’90s 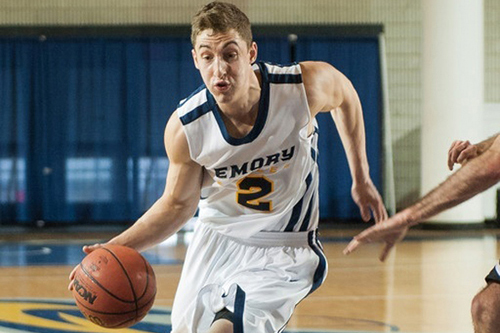 On Friday, Feb. 8, it appeared that the Emory men’s basketball team’s University Athletic Association (UAA) title hopes were slipping away. The Eagles had just dropped a tightly contested road match with rival Washington University in St. Louis to fall to 14-6 on the season – 6-4 in conference play and two games out of first place.

It took a thrilling run through the final months of the regular season – with five straight wins (four in conference play) and not a single loss – for Emory to secure a share of the conference title and an at-large bid into the Division III NCAA Tournament. The icing on the cake was a home trouncing of the University of Rochester, the first-place squad that had defeated the Eagles earlier in their UAA opener.

It was a fitting senior night for a class who had never earned a conference title or an NCAA Tournament berth in their four years at Emory. In fact, the berth was the Eagles’ first since 1990.

They certainly enter with momentum. The Eagles, now 19-6 (10-4 in UAA play) on the season, are riding a five-game winning streak and have won 11 of their last 13 games.

Their offense is led by junior forward Jake Davis and senior guard Alex Greven, who have led the team in scoring in all but four of the Eagles’ games this season. Davis averages 17.7 points per game, while Greven averages 16.8.

Greven has carried the team offensively as of late, averaging a team-high 20.4 points over the last five games and shooting a blistering 56.7 percent from the floor, including 60.6 from three-point range.

Also landing in double-digit points are junior guard McPherson Moore with 12.2 and senior forward Michael Friedberg with 11.7 to go along with a team-leading 7.1 rebounds per game.

The Eagles stress offense and protecting the ball, but the team has been strong on the defensive side as well down the stretch.  They have held their last three opponents to an average of 55 points per game and have allowed them to shoot just 36 percent from the floor.

In their last game, they held Rochester to 20 points less than their season scoring average.

Standing in the Eagles’ way in the opening round are the Randolph College Wildcats of the Old Dominion Athletic Conference, who finished the regular season at 21-6 and also earned an at-large selection to the tournament. It will be the first ever meeting between the two schools.

The game will take place on Emory’s home court at the Woodruff P.E. Center on Saturday, March 2 at 4 p.m.

The Eagles have an 11-2 record at home this season, including seven straight wins at the WoodPEC to close out the regular season.