Mehretu Molds Geography, Color and Architecture at the High 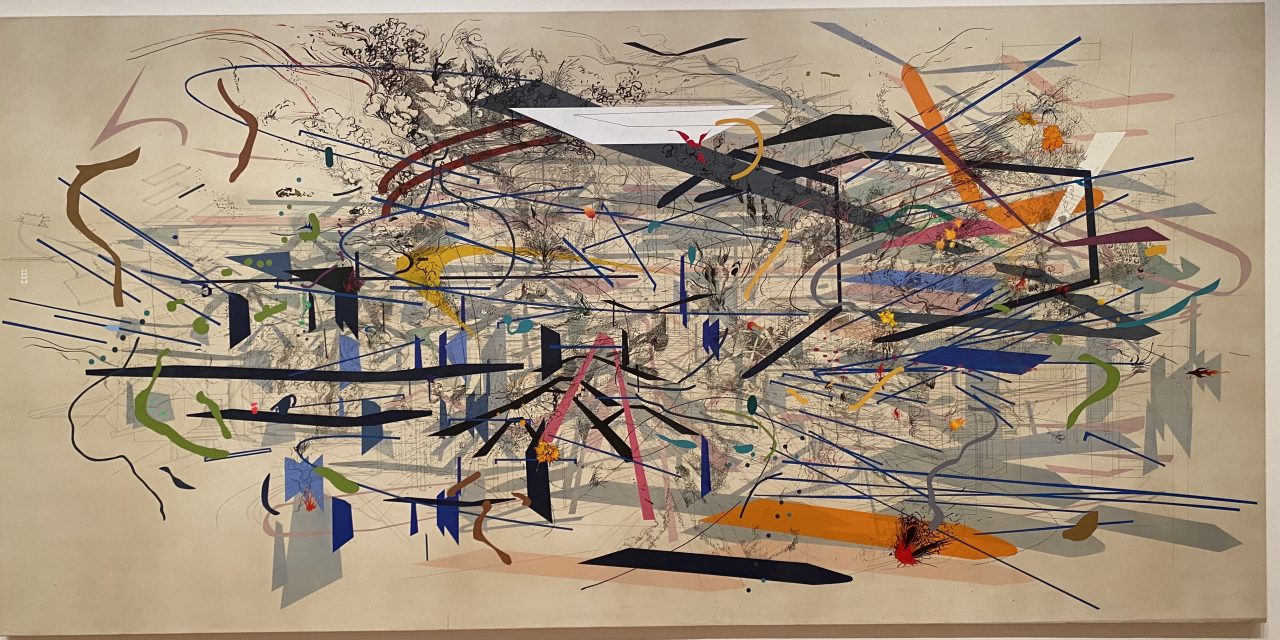 Julie Mehretu, one of the most critically acclaimed visual artists of the 21st century, has made significant waves over the past three decades. Her contemplative works are on display with “Julie Mehretu,” the artist’s first career retrospective, at the High Museum until Jan. 31. A spectacular collection of abstract art, this exhibit illuminates Mehretu’s oeuvre and is worth a visit. 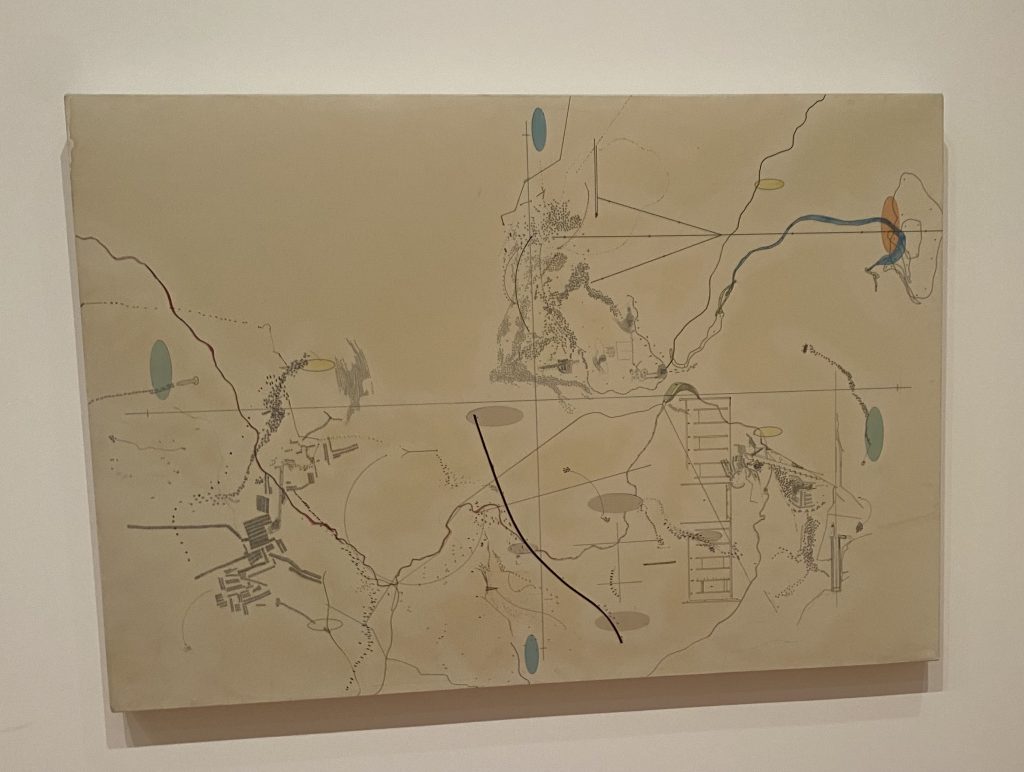 Over the course of her career, Mehretu has used abstraction to explore migration, urban landscapes and human behavior, while also experimenting with the influence of color and shape on space and perspective. Her interest in cartography and geography is evident early on — the exhibit begins with some of Mehretu’s earliest paintings from the late 80s, which are noticeably more simple and bare than her later works. Initial works like “Untitled” (1988) feature intricately sketched lines, incomplete landscapes and routes that seem to be vaguely organized through a compass rose. Mehretu’s early abstraction is firmly rooted in the concrete reality of geographical mapping and sheds light upon her interest in movement and charting migration. 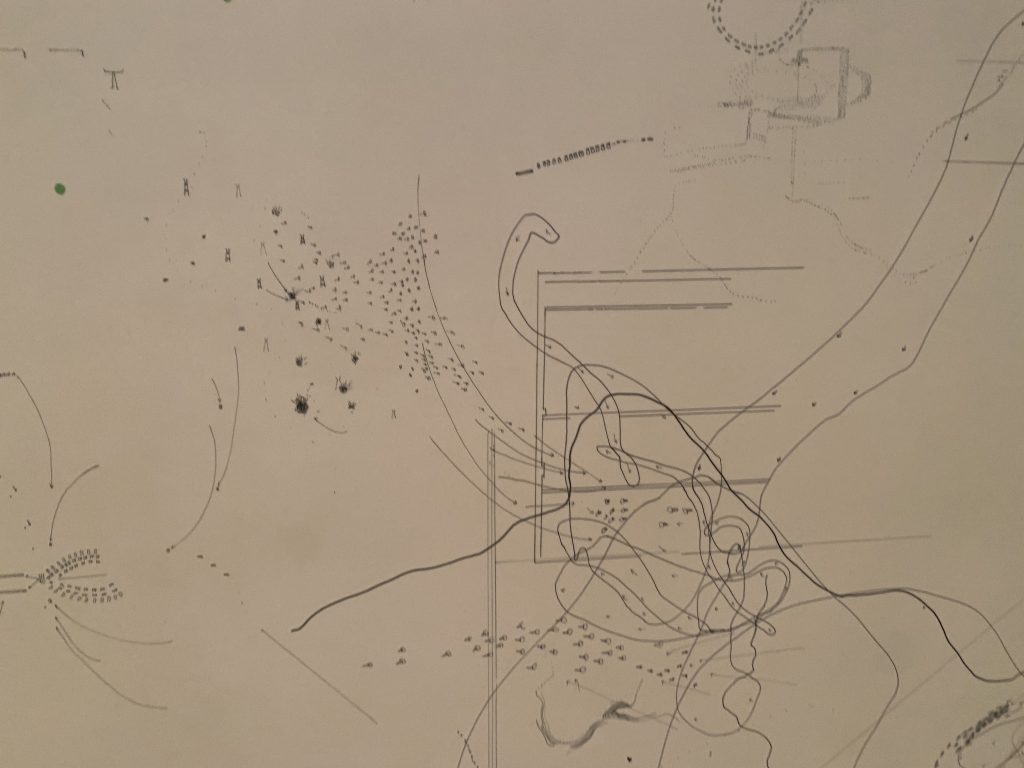 Because the exhibit is ordered chronologically, viewers can easily discern Mehretu’s artistic transformations, which were rapid and marked. Replete with colorful geometric shapes, broad curved lines and images of fire, Mehretu’s work in the 2000s added significant depth and space to her abstract landscapes. Her 2001 painting, “Babel Unleashed,” for example, reveals architectural post-cubism and various disorienting perspectives. Shapes and colors are personified; restless and bursting with energy, they jump out toward the viewer and command attention. Blocks of white, black and green curve the dimensions of the painting, pulling the fine vectors and underlying architectural blueprints inward like a black hole bending space. 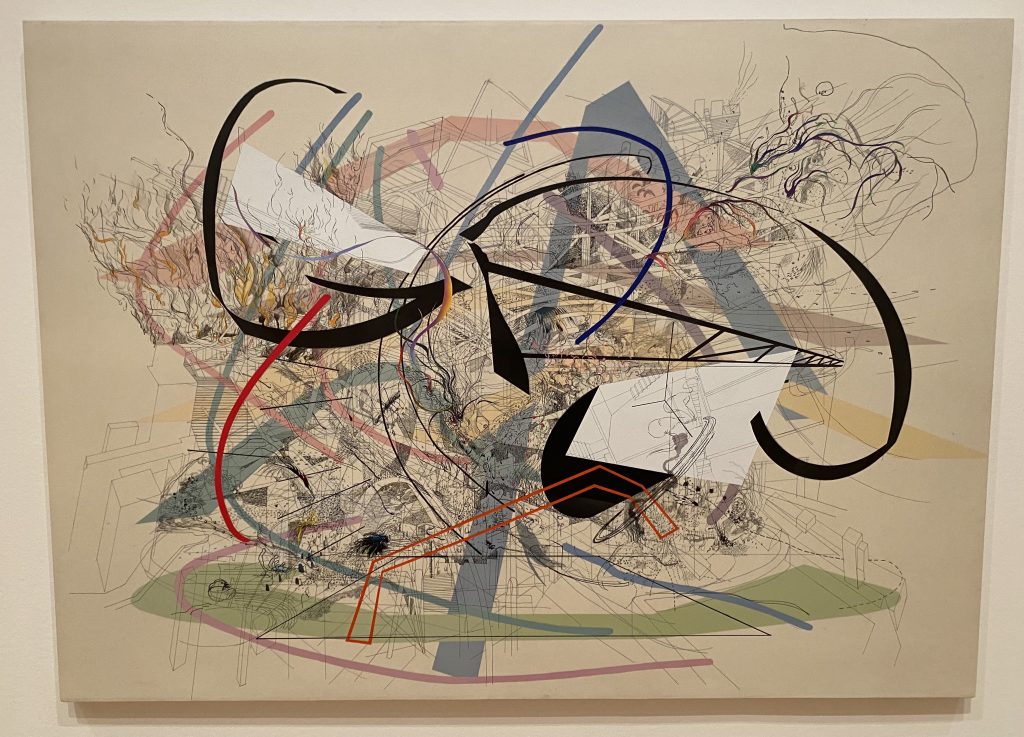 By the mid-2000s, Mehretu pushed her early ideas to a much larger scale, with pieces reaching 20 feet and filling entire walls with their puzzling grandeur. Larger works like “Retopistics: A Renegade Excavation” (2001) are a playful and infinite swirl of color, shape, architecture, movement and gravity. Blocky shapes morph the space around them, creating alternative planes of perspective, while graphite-sketched fire and smoke snakily fills gaps of color, disobeying any formal boundaries. At times, the slithering intricacies of the smoke reminded me of a Ralph Steadman illustration. The color palette in this painting is diverse and atmospheric- gazing deep into this work feels like stepping into a space-age, mid-century family room or a Stereolab music video. 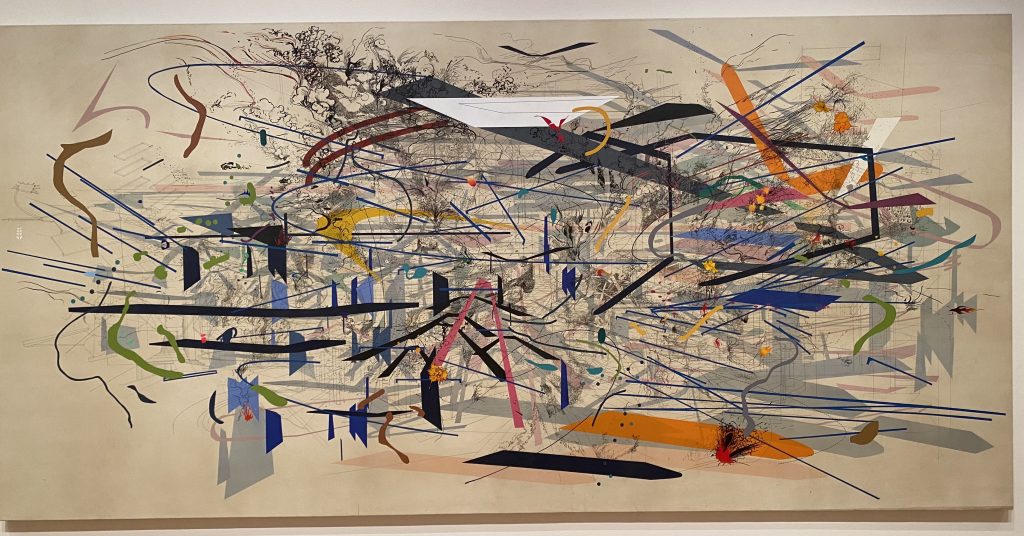 As I moved into the next room of the exhibit, Mehretu’s work progressed by eliminating color once again, becoming almost entirely black and white. Standout works from this mid-2000s movement include “The Seven Acts of Mercy” (2004), which depicts a coliseum surrounded by a whirlwind of fiery movement. An energetic display of order against entropy, this piece shows how structures can impact the movement and behavior of people: “The coliseum [is] the perfect metaphoric constructed space clearly meant to situate large numbers of people,” the painting’s description read. But it also hosts “undercurrents of complete chaos, violence, and disorder.”

As 19th-century Russian painter Wassily Kandinsky once stated, “The more abstract is form, the more clear and direct is its appeal.” Something about Mehretu’s intense abstraction was directly appealing enough to confound and inspire internal realizations. Her work felt personal — each piece is visually abstract and yet grounded in a comforting familiarity.

Despite the potentially daunting and dissonant nature of Mehretu’s works, she employs only familiar aesthetic vocabulary, which promotes accessibility. Mehretu’s work isn’t necessarily satisfying, however; there is a never-ending sense of movement and change, as if the work and its meaning is perpetually shifting.

In the early 2010s, Mehretu’s theme of architecture and urban structures became the primary focus. Most notable was “Aether (Venice),” a towering dissection of Gothic Venetian architecture. Mehretu mixes layer upon layer of archways, facades and quatrefoils, forming a mutated monster out of Venitian urban structures.

In the closing section of the exhibit, which showcases Mehretu’s most recent works, the focus was more on the artist’s process of creation. This was less impactful, however, as I found these works to lack the gravity and backbone which made her older works so evocative.

Mehretu’s titanic experiments with color, space, volume, cartography, desire and movement are mesmerizing and thought provoking. I felt a tinge of dissatisfaction at the end; perhaps Mehretu’s work evoked yearning for a concrete understanding at which I may never arrive. Regardless, Mehretu’s mesh of bizarre abstraction and familiar reality makes for a lighthearted experience for any audience.