The military conflict unfolding in Gaza has garnered a fair bit of attention in the international media. While hostilities in the region have been largely ongoing, this latest batch of fighting has been brutal.

Hamas has launched over 700 rockets, unveiling a new arsenal of Egyptian-built weapons that reach further into Israel than ever before.

In response, Israel has intensified air strikes against Hamas leaders, facilities and rocket installations in an operation that has been dubbed “Pillar of Defense” by Israel Defense Forces (IDF) leaders.

While Israel has been taking “superhuman measures” to discriminate between military and civilian targets, as Israeli Ambassador Michael Oren recently stated in an interview with MSNBC, there have still been considerable civilian casualties on both the Palestinian and Israeli sides.

According to the Telegraph, Kandil said that “the boy, the martyr, whose blood is still on my hands and clothes, is something that we cannot keep silent about.” Indeed, many networks, including CNN, ran the story as a demonstration of the conflict’s brutality.

But is this really the entire story?

Shortly after CNN ran with the story, other media outlets noticed discrepancies. Pro-Israel blogger Elder of Ziyon pointed out that the IDF did not launch any air strikes into Gaza during that time out of respect for Prime Minister Kandil’s visit – though Hamas rockets were still being fired into Israel.

Further, local security officials who arrived on-scene shortly after the explosion that killed Sadallah removed what the projectile’s remains – leaving no evidence behind for later investigation.

The New York Times, after reporters visited the home where the explosion took place, concluded that “the damage was nowhere near severe enough to have come from an Israeli F-16, raising the possibility that an errant missile fired by Palestinian militants was responsible for the deaths.”

It would indeed appear that Mahmoud Sadallah was killed by Hamas rather than an Israeli air strike. IDF officials reported that at least 99 rockets fired by Hamas and other Palestinian militant groups have fallen well short of their targets and struck civilian buildings in Gaza.

However, that hasn’t stopped media outlets from lifting up deaths caused by Hamas, like that of Sadallah, as evidence of Israeli brutality.  This effort to generate false or misleading media coverage that favors the Palestinian cause has been labeled “Pallywood” by many in the pro-Israeli community.  Cases of this kind are documented regularly during the ongoing Israeli-Palestinian conflict.

Sadly, the tragic death of young Sadallah is not the first time “Pallywood” coverage has occurred in this current round of hostilities.

A few days before Kandil’s visit, BBC aired footage of a man in a beige jacket being carried away after being “injured” in an Israeli attack.

However, later footage from the same incident shows that same man walking on camera, completely uninjured.

Who bears more responsibility for the latest round of hostilities is still a matter of debate. However, the use of misleading media coverage like Mahmoud Sadallah’s death and the “injured” man from the BBC is a clear attempt to sway public opinion toward the Palestinians.

This is problematic for two reasons. The first is obvious: the images that are drawn from these whole-cloth creations are blatantly false.

The second is that, by creating sensational and false images, Palestinians actually ignore or undermine the stories of those people who are actual victims of the conflict.

For example, one of the Palestinian victims was Hamid Younis Abu Daqqa, a 12-year-old (some sources say 13) boy who was shot in the chest while playing soccer. The bullet came from a border skirmish between IDF forces and Palestinian militants on Nov. 8.

Pro-Palestinians don’t need to fabricate anything in that story to make a point about the conflict’s brutality.

Of course, taking a more genuine position would force us to examine Israeli casualties as well, such as the 25-year-old pregnant woman who was killed while traveling to a memorial service for a friend who was also killed by an attack in 2008.

Though Israeli casualties have so far been much lower than Palestinian losses, a pure realpolitik perspective suggests that talking about the pain suffered by your enemy at the hands of your attacks won’t help your case.

We must pray that as this conflict continues, media outlets will be able to avoid being fooled by any more false reporting. Truth will be absolutely essential if there is any hope for a lasting peace in the region.

David Giffin is a second year Masters in Theological Studies student at the Candler School of Theology from Charleston, Ill.

Making The Best Out Of The Cuts 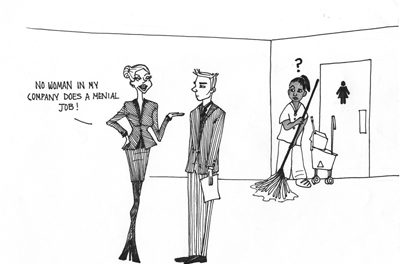