Meanwhile at the DUC: A Rap Career on the Rise 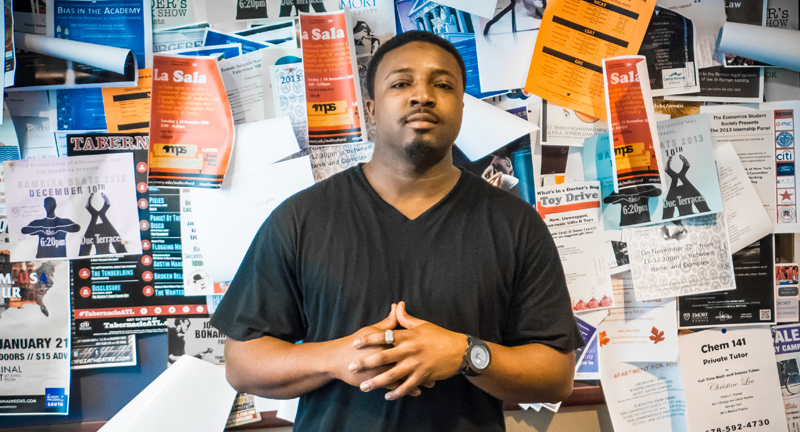 When his shift is over, Galen Berry strides over to join his co-workers at a table on the far left side of Emory’s Dobbs University Center (DUC). As he sits down, Berry begins freestyling: “I’m going in, no stallin’, no scholarships, just ballin’.”

Students sitting at surrounding tables glance over at Berry’s commanding figure. They listen to the catchy yet emotional lyrics and bob their heads to a silent accompanying beat.

The way Berry dresses outside of work is a far cry from the all black uniform he wears at the DUC. Sitting down to discuss his rap career, he has on a navy blue Ralph Lauren Polo shirt, accompanied by an Atlanta Hawks snapback hat and Nike Retro 1s, all of which match perfectly.

Growing up poor and aspiring to become a rapper is a clichÃ© heard every day, but for Galen “Clockwork” Berry, music is more than an escape; it is a coping mechanism, a passion and a vehicle to tell his story.

His rap name “Clockwork” stems from his ability to manage time.

Between working full time, writing and rapping, he must work efficiently every minute of the day.

Berry started rapping around the age of 10.

“I started out writing poems, and then I realized my poems flowed like raps, so I turned them into songs,” Berry said.

His raps are melodic, and his tone fluctuates from fast to slow. His voice is deep and raspy and his lyrics focus on meaningful issues that are expressed through lines such as, “Sometimes I feel like dying would be a blessin’, cause I wouldn’t be in the presence of all this killin’ and stressin’. I mean times is hard, and people are getting reckless. We dying over money, but look at what we invest in. Robbin’ and gettin’ over, depending on these pistols like we forgot about Jehovah.”

Berry cites his early years as the inspiration behind his music. He said that being raised in many poverty-stricken neighborhoods, such as Courtyards at Glenview in East Atlanta and Erin Avenue off Metropolitan Parkway, gave him drive.

Throughout his adolescence, Berry witnessed many of his friends turn to drug dealing or join a gang to earn a living, something he fought hard to avoid.

“I was raised to be a respectable young man,” Berry said. “I was raised in the church, but like I said, my family is from the hood, and I’ve stayed in many hoods in Atlanta, so it was hard not to fall off track.”

Berry, 23, was born and raised in East Atlanta, but moved to suburban Douglas County when he was 11 years old. He attended Douglas County High School until his family moved back to East Atlanta after he got in trouble with the law at the age of 16.

Berry admits that the run-in with the law resulted in his expulsion from school and forced him to transfer to McNair High School for 12th grade.

This event destroyed his dream of playing college football or running track. He was heartbroken that schools such as Georgia Tech and Georgia State University could no longer recruit him.

His father, however, insisted that Berry remain strong and carve his own path. Berry expressed his gratitude to have his father’s powerful guidance in his life.

He soon realized that work would help him elude further altercations. Before working at the DUC, Berry attended Georgia Perimeter College but dropped out due to financial stress. In 2008, his godmother informed him of a job opening at the DUC, which he took.

Every workday Berry methodically strides through the second floor doors of the DUC at around 12:50 p.m. From 1 p.m. to 9 p.m. Berry can be seen preparing pizza and occasionally shooting empty cheese cartons into the trashcan as if he was playing basketball.

Students that are friendly with Berry can always count on his welcoming fist-bump, which is followed by him yelling, “What’s good?”

“I enjoy cooking and having conversations with students, but it does bother me because I had the opportunity to go to a university myself,” Berry states. “It hurts to have to cook when I should be on the other side.”

Berry feels that people look down on him because he is a cafeteria worker and that they are not aware of his rapping abilities.

Malcolm Hodge, a friend and co-worker of Berry’s since 2008, said that Berry’s personality is “crazy, funny and active.”

“Not to mention the fact that he always be rapping,” Hodge laughingly said.

Hodge admires Berry’s music because it speaks on topics that people who have grown up in bad neighborhoods can relate to. In his song, “Ballin’ (Major League),” Berry embodies the voice of struggling people by saying, “All my people fallin’, so I’m a max it out, ’til He call me.”

Hodge compares Berry’s rapping to Lupe Fiasco and Kendrick Lamar, two rappers who said in an interview with XXL Magazine in 2012 that they want to be known for speaking about their past and the effects the world has on young black people.

“I am into old school hip-hop and what I love about [Berry] is that he seems to have an old school flavor mixed with a new school sound,” Saumya Mehta, a College sophomore majoring in economics, mathematics and biology, said after listening to Berry rap.

Berry’s raps are influenced by two of his favorite artists, Tupac and Biggie.

“I talk about everything real like Tupac, but I tell it like a story, similar to Biggie,” Berry said.

His goal is to paint an image for his listeners through his words.

Last year, Berry recorded a song about one of his best friends, Joshua Watson, who, at the age of 18, was shot and killed outside a MARTA station on his way home from work on Christmas Eve.

In Watson’s tribute song titled, “Meet You in the Sky,” Berry speaks about all the people who have died chasing money, saying that, “If we all live right, then we will see you again,” referring to reuniting with Watson in heaven.

After listening to “Meet You in the Sky,” Mirza, who comes from a family of musicians and prides himself on his knowledge of the industry, was impressed and feels Berry has a talent that can separate him from the amateurs.

Berry uses his music as a way to express himself and let some of the pressure off of his chest, but he is also looking to turn it into a career.

To Berry, music is a way to make a difference.

“People who are ready to give up need to know that pain is temporary and if they work hard enough, things will get better,” Berry said.

It was only recently, however, once Berry met Patrick Adeleye (Tune), that he felt his rapping dream became tangible.

Adeleye, director of business development at the promoting company STARkast and prominent Atlanta DJ at clubs such as Mansion Elan and LaCura, can provide the network for Berry’s exposure into the rap world.

According to Adeleye, who has promoted for artists such as T-Pain, Trey Songz and Gucci Mane, Berry needs to differentiate himself from the current mainstream rappers.

“No one wants to hear another Lil Wayne,” Adeleye said. “They want Clockwork and whatever new form of rap he brings to the table.”

Mehta said that Berry “can bridge the gap between club rap and lyrical rap,” which “is the recipe for success.”

Working a full-time job has taken Berry away from the much-needed time in the studio, according to Adeleye, who knows of rappers who spend days in the studio without sleep, constantly editing their work.

Berry plans to work fewer hours at the DUC during the summer in order to devote more time to writing and recording.

Berry does not just want wealth and fame; he wants children to look up to him as well.

“I rap about coming from the bottom,” Berry said. “I wasn’t born with a silver spoon, and I want kids in the hood to know that if I can make it, they can too.”

Adeleye commented that Berry’s experiences growing up have made his lyrics very genuine.

“A lot of the rappers today have a fake sense of what it is like growing up in the hood and facing life changing choices every day,” Adeleye said. “[Berry] is as real as you get.”

Berry, ecstatic about the praise he has received from students regarding his music, lights up when anyone walking through the DUC tells him he will be successful.

His body language becomes noticeably more invigorated and anyone can see him mouthing lyrics to his songs as he sprinkles cheese on a pizza.

“A select few people make it in this industry,” Adeleye said. “However, Berry is dedicated to his craft and works his a– off.”

Berry knows a long journey lies ahead of him but confidently said that dying is the only thing that could stop him from accomplishing his goals.

Ultimately, Berry may or may not succeed, but he has made it clear that giving up is not an option. The unpaved road ahead of him will present its challenges, but Berry, like clockwork, plans to reach his destination.