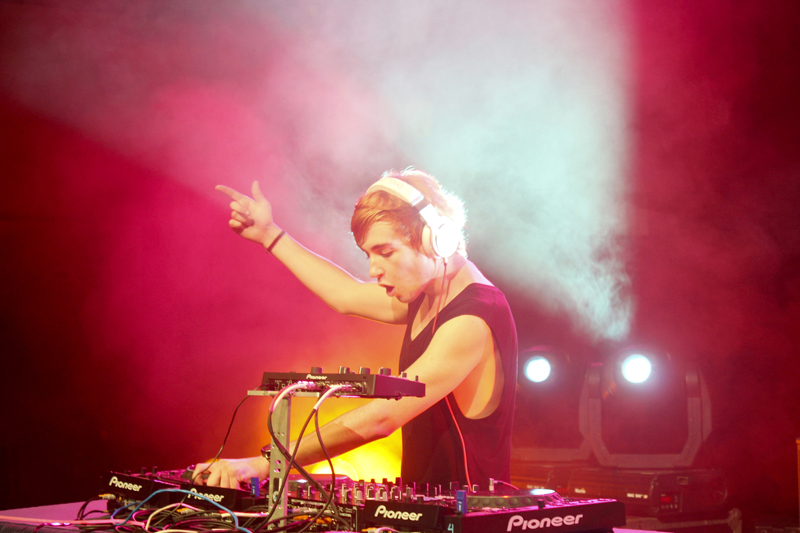 Avila attracted an enormous crowd who were “left screaming for more” at the end of the two-hour concert, according to SPC’s Co-Band Chair and Collge senior Zachary Atlas.

Avila was set up on stage in front of a large screen, which allowed audience members in the back to easily see him play.

Some students on the other hand did not find Avila exciting, such as College sophomore Andrea Gamboa who said that she felt the concert itself wasn’t very memorable.

SPC sought out Avila because their homecoming chair Chris Alfonso is a “really big fan of electronic music,” according to Atlas.

The fact that Avila was already in town for the electronic music festival “TomorrowWorld” made his presence at Emory an easier feat, said Atlas, adding that his manager was very easy to get along with.

SPC handed out glow sticks for students to wear and inflatable beach balls to pass around.

A few audience members got onstage and danced in front of Avila. Avila and the audience seemed to be feeding off of each other’s energy, according to Atlas.

Avila is quickly gaining musical fame according to Atlas and is about to accompany fellow musician Tiesto on a two-month tour this week.

Many students at the concert said they were surprised and impressed to hear how young he is seeing how talented and successful he has become.

Even with all of his success at such a young age, Atlas said that Avila was “super kind” and really enjoyed interacting with the crowd.

After the concert, Avila stuck around to sign autographs and take pictures with students that approached him, according to Atlas.

Atlas added that Avila even made an appearance at Maggie’s Neighboorhood Bar & Grill later on in the night to spend more time with his fans.