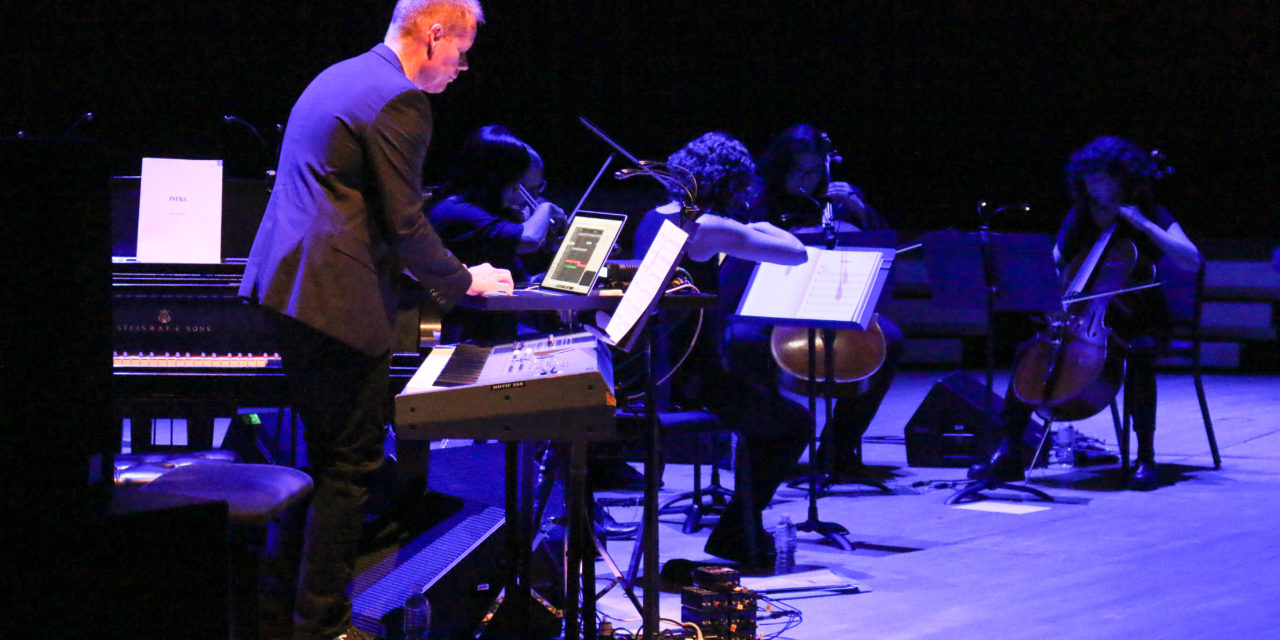 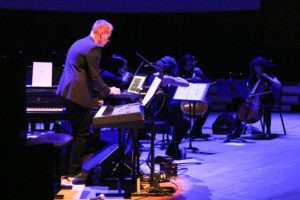 Rarely do Schwartz Center concerts feature a laptop and a Steinway piano sharing a stage.

From the moment the audience filtered into the Emerson Concert Hall on Sept. 28, the contrast of technology and classical elements made it clear that the opening night of the 2018-2019 Candler Concert Series would not be a standard performance.

Max Richter and the American Contemporary Music Ensemble (ACME) played selections from Richter’s original works “Infra” and “The Blue Notebooks.” The string quintet sat in an arc, bows and instruments ready. To their left was Richter, with one hand on the piano and the other on his computer keyboard.

Richter moved between grand piano and Macbook Air with ease. A walking anachronism, Richter blends his classical compositions with a modern sensibility, and has become one of the most influential composers of the “neo-classical” movement. Richter seamlessly synthesizes contradicting elements in his music, borrowing from both the past and the present, and from modern and classical music alike.

“There are Franz Schubert atoms in it,” Richter said to the audience about “Infra.”

He smiled and the audience laughed, but Richter went on to explain that he composed “Infra,” which means “below” in Latin, in memoriam of the July 2005 terrorist bombings in London.

Over the speakers unfolded the sound of electronic blips, static and the churning wheels of a train. Inherent motion in the music evoked rush hour — “a traveling nature,” as Richter put it. City noises and synths anticipated the soaring orchestral music to come.

It didn’t matter that we were in a concert hall. With his laptop, Richter could place the audience wherever he liked, framing his compositions with thoughtful background noise. Richter’s ability to manipulate negative space, where most composers would rely only on silence, immersed listeners in a carefully crafted synthetic soundscape. With the press of a few buttons, Richter controlled not only the notes we heard, but also the element in which we experienced them.

With our setting established, the music could truly begin. Richter and ACME took turns listening and responding to each other; in this way, “Infra” was performed almost in call-and-response. While ACME played, Richter was either maneuvering the synths or waiting at the grand piano with his hands clasped. Likewise, after ACME struck the final note of a movement, they went silent so that Richter could take over. What united the two distinct parts was their shared synthetic undercurrent, constantly humming.

The climax of the first half of the concert culminated in “Infra 5,” performed by ACME. The strings rose in intensity until static began to pour from the speakers, and then they launched into a violent and breathtaking crescendo. Right before the crescendo became too overwhelming, however, “Infra 5” drove itself to a sudden halt; it was Richter’s turn to respond.

Plucking solemn minor chords from the grand piano, Richter crafted slow, winding melodies full of sorrow. Accompanied by only a shallow electronic texture, his piano-driven “Infra 6” offered the audience respite from the frenetic climb of strings.

“Infra” took a total of 30 minutes. The audience clapped long after the piece ended and Richter and ACME left the stage.

After a brief intermission, Richter returned, followed by ACME and a new addition, Laura Hooper, sitting in the center of the arc. She read selections from Czeslaw Milosz’s poetry and Kafka’s “Blue Octavo Notebooks,” for which Richter’s “The Blue Notebooks” is named.

Richter introduced “Blue Notebooks,” which he composed 15 years ago during the invasion of Iraq.

“Politics back then struck me as moving into a branch of fiction,” Richter said to the audience.

He also said this composition, written as an exploration of “personal and political brutality,” remains relevant today.

“The Blue Notebooks” began with a quiet storm, the ticking of a clock and the clattering keys of a typewriter. Peaceful piano chords rose above the din. Then, the string ensemble played “On the Nature of Daylight,” one of Richter’s most commercially successful compositions, which has found placement in multiple movies and television shows, including “Arrival” and “Shutter Island.”

“The Blue Notebooks” ascended into a flurry of minor intervals that resolved in dramatic pitch, and the silence hovered for a few moments. Richter and ACME received a standing ovation, after which they returned for an encore.

“We have one more piece for you,” Richter said. “This is from ‘The Leftovers.’ ”

The audience clapped and settled back into their seats, a few scattered cheers audible. Richter grinned and shook his head. He seated himself at the piano once more.

For another 10 minutes, Richter transported his enrapt audience to other worlds, suspending the nature of time itself. Through the performance, his synthesis of classical and modern, of then and now, just made sense. They transcended category and allowed listeners to transcend themselves, if only for a moment.

Concertgoer Bri-ahn Jones said she first learned of Richter from an episode of Stephen King’s show “Castle Rock” two weeks ago. She traveled all the way from Nashville to hear him play. She said Richter’s talent made the drive worth it.

“If you’re just getting into classical music, he’s a great person to listen to,” Jones said, adding that her favorite piece from “Infra” is “Journey 4” and her favorite from “The Blue Notebooks” is “On the Nature of Daylight.”