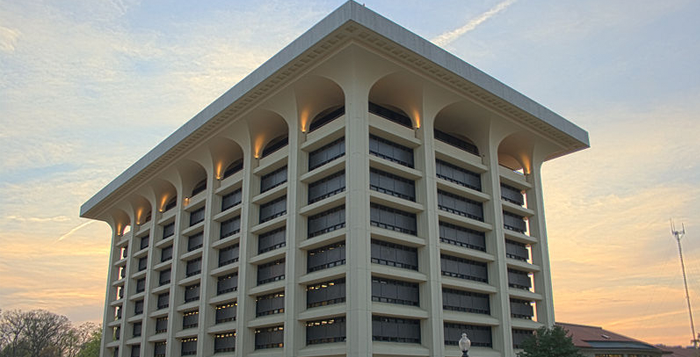 Magee and Creative Writing Professor Kevin Young, curator of MARBL’s literary collections and the Raymond Danowski Poetry Library, led Emory’s acquisition of O’Connor’s archive from the Mary Flannery O’Connor Charitable Trust in Milledgeville, Ga. MARBL has had an ongoing conversation about acquiring the archive with the O’Connor Charitable Trust since 1964 – over 50 years – and restarted the conversation in recent years leading up to the acquisition.

“We are deeply indebted to the relationship and trust of the Mary Flannery O’Connor Trust and have a deep sense of honor and responsibility to uphold that trust,” Magee said. “It’s been a wonderful, exciting pilgrimage.”

The newly acquired archive includes over 600 letters that O’Connor wrote to her mother almost daily, her Masters thesis from the University of Iowa, personal photographs and items, such as her rosary, eyeglasses and personal journals. O’Connor’s papers are available for use in research in the MARBL reading room, now located on the seventh floor of the Robert W. Woodruff Library, and an initial inventory of O’Connor’s papers is available online, according to an Oct. 7 University press release.

“We already had some O’Connor materials here, but these are are a significant addition,” Magee said.

O’Connor’s archive joins collections at MARBL of other famous Georgian writers and artists, including Alice Walker and Benny and Raymond Andrews, and “will be a centerpiece of our collection in modern literature,” Magee said in the press release.

Best known for works like the novel Wise Blood and the fiction collection A Good Man Is Hard to Find, O’Conner was born in Savannah, Georgia in 1925 and wrote humorous, often dark depictions of life in the South before dying of complications from lupus in 1964.

“She has a very universal appeal for people who want to understand the human condition, but one that’s specifically rooted in this one place, here in Georgia,” Magee said. “She was a Georgia writer and had visited here at Emory, spoke in some classes, was treated at Emory Hospital for lupus. There’s that local connection, but she’s also an internationally recognized and renowned writer.”

Young said that he was surprised to find a considerable collection of O’Connor’s poetry, since she is not well-known for her poetry.

“I hadn’t known that she had [written] poetry early on, and so to see her writing poetry in this tradition of fiction writers, from Hemingway, Faulker, Joyce … was exciting,” he said.

One of Magee’s favorite items from the archive is a personal journal labeled “Higher Mathematics I.”

“She had written that she’d gotten a C in math and an A+ in humanities, but she names one of the journals ‘Higher Mathematics I,’ where it’s really a rumination on her work and the art of writing,” Magee said. “There’s a kind of wryness to [the title].”

“[MARBL] is a treasure trove of possibility,” Harsh said at an afternoon press conference. “Integrating archival research is essential to Emory at every level.”

College senior Sarah Freeman is writing her Dance department Honors thesis using O’Connor’s short story “The Displaced Person.” She plans to create a three-part performance piece based on the plot and motifs in the story and on research specifically on O’Connor’s life.

“It’s really exciting for me because I have the chance to learn more about her as a young person and about her illness,” Freeman said. “I think the variety of material [in the archive] – her journals, her personal items like her glasses – offer a difference perspective on her life.”

Tonight at the Oxford Presentation Auditorium, Emory’s Aquinas Center of Theology is holding the third lecture in its Flannery O’Connor Lecture Series, sponsored by a three-year grant from the Flannery O’Connor Trust, according to its website. This year’s sold-out lecture will be delivered by Director of the Univeristy of North Carolina’s Southern Historical Collection Bryan Giemza and is called “Flannery O’Connor with Her Irish Up,” focusing on O’Connor’s Irish American identity and Irish Catholicism.