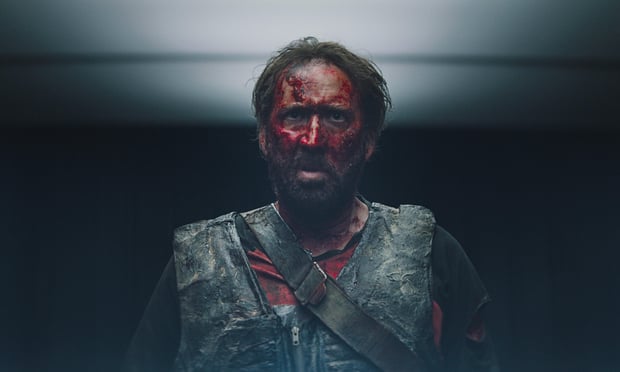 Director Panos Cosmatos demonstrated his bravery with his latest film, “Mandy,” perhaps the most psychedelic, phantasmagoric two hours you will ever spend in a theater. It is relentless, off-putting and absurd. Despite the bizarre nature of his vision, Cosmatos was not deterred from making “Mandy.” The result is a bold, brash film that strings the audience along on a ride to an unknown destination. And while it doesn’t work as a coherent movie, it is certainly a sight to behold.

Set in 1983, “Mandy” introduces the audience to a couple who is deeply in love, lumberjack Red Miller (Nicolas Cage) and artist Mandy Bloom (Andrea Riseborough). They live a tranquil and secluded life in the woods until the leader of a cult of — in Red’s words — “Jesus freaks” decides he cannot be without Mandy, and enlists some hell-sent demons to abduct her and bring her to him. Despite being drugged, Mandy refuses to be seduced by the cult leader, Jeremiah Sand (Linus Roache), and laughs at his attempt to woo her. In retribution, Jeremiah and his followers burn her alive and force her husband to watch. Red is understandably devastated, and seeks vengeance against those who snatched his love away from him. What follows is a straightforward revenge plot that doesn’t pull any punches and draws a lot of blood.

Despite a fairly uncomplicated storyline, “Mandy” is rather confusing to watch. It is frequently interspersed with sequences in which it is unclear whether what is on screen is a dream or reality, and it heavily utilizes strange and abrupt cuts that are jarring and disorienting. Additionally, major plot points, such as how Red just happens to be a skilled fighter and welder, are left unexplained. The narrative also relies on the audience’s investment in Red’s vengeance, but since his relationship with Mandy is only relegated to a few minutes of exposition, it is difficult to care very much about whether or not he succeeds.

Where the film truly shines is in its technical aspects, namely its visuals and sound design. Each frame is overflowing with swirling colors and pulsating lights. In every one of the film’s many brutal action sequences, the camera does not shy away from the violence, instead zooming closer so that every last gory detail can be seen in claustrophobically close proximity. Each on-screen movement is slightly delayed, creating blurry after-images that add to the film’s eerie mood. Johann Johannsson’s pounding, electronic score is perhaps the film’s most effective method of building tension and establishing an atmosphere of dread, and the editing done to the vocals of each character (particularly the lowering of Cage’s voice to sound more and more demonic as the film goes on) is a stand-out. “Mandy” is a sensory spectacle, to say the least.

For a film with such originality, its narrative is sorely lacking. The writing, for example, is quite cliched. In the beginning of the film, when Red comes home, Mandy exclaims “You scared me!” — a banal line that foreshadows the true terror that awaits her. Every line that leaves Jeremiah’s mouth is intended to sound prophetic, but has definitely been heard before, from his delusions of grandeur and divinity to his claims of the cleansing power of fire as he sets Mandy ablaze. The performances are similarly corny and over-the-top, which can make certain serious scenes seem rather funny; one scene with Cage after Mandy’s death had the entire audience in stitches.

When viewed as a whole, “Mandy” is all about style over substance. Its fairly basic narrative, muddled storytelling and plot holes make it difficult to appreciate the film as a coherent work, but its stunning cinematography and captivating sound design are undeniable. And while at this point the revenge tale is rather overdone, it does make for a bloody and, at times, fun viewing experience. If you’re looking for a film with a lot to say, don’t see “Mandy.” But if you’re looking for a bizarre, gory extravaganza, look no further.