Seventy-two hours after Malek Jandali performed “Watani Ana” in Washington, D.C., his mother and father, oceans and seas away in Syria, were handcuffed and beaten.

This was a moment of realization for Jandali, the Syrian-American pianist and composer, a moment in which he became fully aware of the power of music.

“The question is, ‘How can I hurt anybody playing the piano?,’ ” Jandali said in a phone interview with the Wheel. “Only then, only then, [did I realize] that music is so powerful — for a dictator to make an executive decision to beat my parents.”

Rewinding to 10 years before that brutal attack on his parents, however, Jandali had a much different, yet just as significant, insight into the power of knowledge of music.

“I started as a classically trained pianist — I played Rachmaninoff, Tchaikovsky, Mozart, Bach,” Jandali said. “But what I lacked under the dictatorship in Syria is comprehending what I was actually performing. I did not comprehend … until I came [to the United States] and I studied and analyzed scores and had the tools to actually unlock all these treasures.”

For Jandali, who was born in Germany and raised in the Syrian city of Homs, the comprehension of music marked his transition from simply reading the notes of others, aimlessly pushing keys as a performer, to writing his own notes, creating his own musical universe as a composer.

This transition, he says, was possible because of the freedom he experienced after having come to the United States. This freedom, which was non-existent when Jandali was growing up in Homs, remains buried under the destruction and bloodied by the violence of the war-torn Syria even today.

The conflict began in the city of Daraa in March 2011, when Syrian children and teenagers were arrested for creating graffiti that spoke out against the nation’s dictatorship. Demonstrations and protests broke out, marking the first dozens of casualties. The civil war is now in its fourth year, and, to date, the death toll has exceeded 200,000.

“Music is not just entertainment, it’s beyond that,” Jandali said. “As a reaction, being Syrian-American, witnessing these atrocities, it was my duty to reflect and react and compose something called ‘Watani Ana,’ which means, ‘I am my homeland, and my homeland is me. My love for you is fire in my heart. When am I gonna see you free?’ ”

Jandali, who currently splits his time between Atlanta and New York, does not limit the meanings and messages or the context and content of his compositions solely to Syria. In a way, the specific passion that permeates each and every one of his notes is a passion that takes on a universality, where listeners are able to individually invite Jandali’s music into their minds, and, in doing so, gracefully invoke personal perceptions and ignite infinite imaginations.

Jandali says that one of the oldest methods of musical notation in the world was invented by his ancestors in Ugarit, an ancient port city whose ruins are now found in Ras Shamra, a headland on the Mediterranean Coast of northern Syria. The invention of the Ugaritic alphabet around 1400 B.C., he says, provided an early means of expression.

“My album, Echoes From Ugarit, [is] based on the oldest musical notation in the world, which nobody told me in Syria when I was educated there,” Jandali said. “That shows you that that regime is anti-music, anti-truth, anti-beauty.”

In order to premiere that work, Jandali was forced to get approval from the Syrian dictatorship.

“Imagine if you want to have a concert here at the Schwartz Center and you need to go and ask Mayor Kasim [Reed] or the President to have permission,” Jandali said. “It’s just so ridiculous.”

Jandali, speaking of the Syrian President Bashar al-Assad, cites that what he is doing is truly nothing novel, nothing new. Throughout history, dictators have feared, censored and used art for purposes of propaganda and political agendas.

“Today, as I’m speaking to you, the Syrian [National] Symphony Orchestra, supported by the dictator and the Ministry of Culture, they do concerts in the name of the children,” Jandali said. “The same government or dictator will commit a massacre, killing the children in the refugee camps. It’s just the epic of hypocrisy.”

The composer finds humanity’s dehumanization of war troubling, and believes the Syrian dictatorship, by targeting children, is targeting the future of Syria as a whole. What therefore remains of utmost importance to Jandali is spreading a message of peace, and, in particular, being a voice for the Syrian children, whom he feels are the closest representations of angels on Earth in all their purity and innocence.

“My main goal now is to preserve these maqams, the voices of the people, the chants, my cultural identity, the collective memory of the people, through music,” Jandali said. “Buildings, churches, everything is being destroyed, but hopefully we can have some music to spare and to contemplate.” 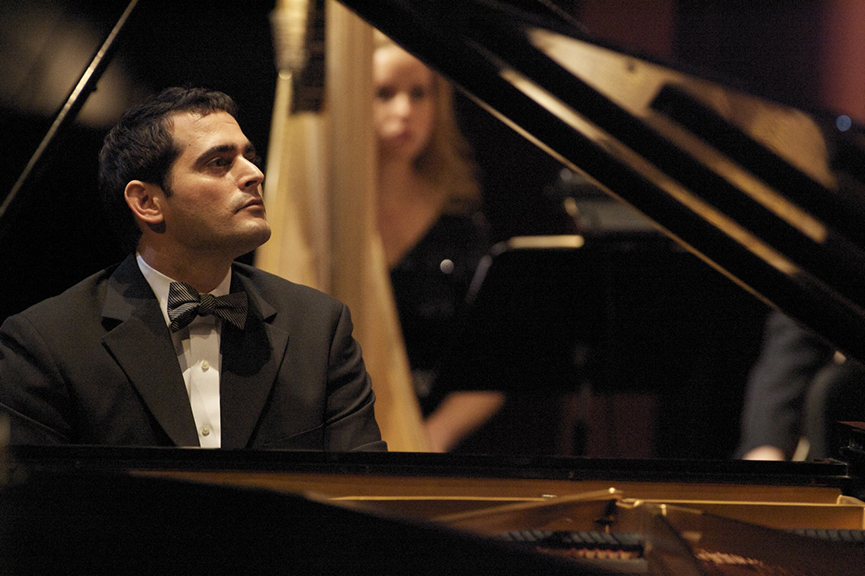 Jandali has also developed Pianos for Peace, a project that aims to place pianos in public spaces around Atlanta. The pianos will be decorated by artists, and played by artists. The end goal is to raise funds for humanitarian projects and maybe even scholarships for students, all while attempting to spread peace through music.

To Jandali, art as a communicator of identity and thought is everlastingly powerful. He notes how we represent our nations with flags, which can be viewed as artistic paintings. But perhaps even more telling is how we honor where we come from by singing national anthems. Music, Jandali feels, is unlike any other form of artistic expression.

“If you compare music to visual art, film, painting or poetry, you can always see the painting, touch the statue, see the film,” Jandali said. “You can’t see music. And you can’t touch it. It’s painting on silence.”

Music, then, is essentially a painted silence capable of igniting the loudest cries against the injustices and inhumanities that confront us. It is a form of self-expression in its most delicate and vivid state, able to set in motion endless emotions and, at times, even provoke reactions and retaliations. To Jandali, in particular, music is an outlet to pursue missions of greater meaning and one of self-expression.

SoHo, Jandali’s upcoming album, will be featured next year on Feb. 6 at Carnegie Hall. And what will become even more solidified is that Jandali, as he paints on silence, is a creator of compositions that will forever hang upon the hearts of humankind.

“At the end of the day, I will say that my music is dedicated to you — the listener,” Jandali said. “May you find harmony, hope, love and peace.”