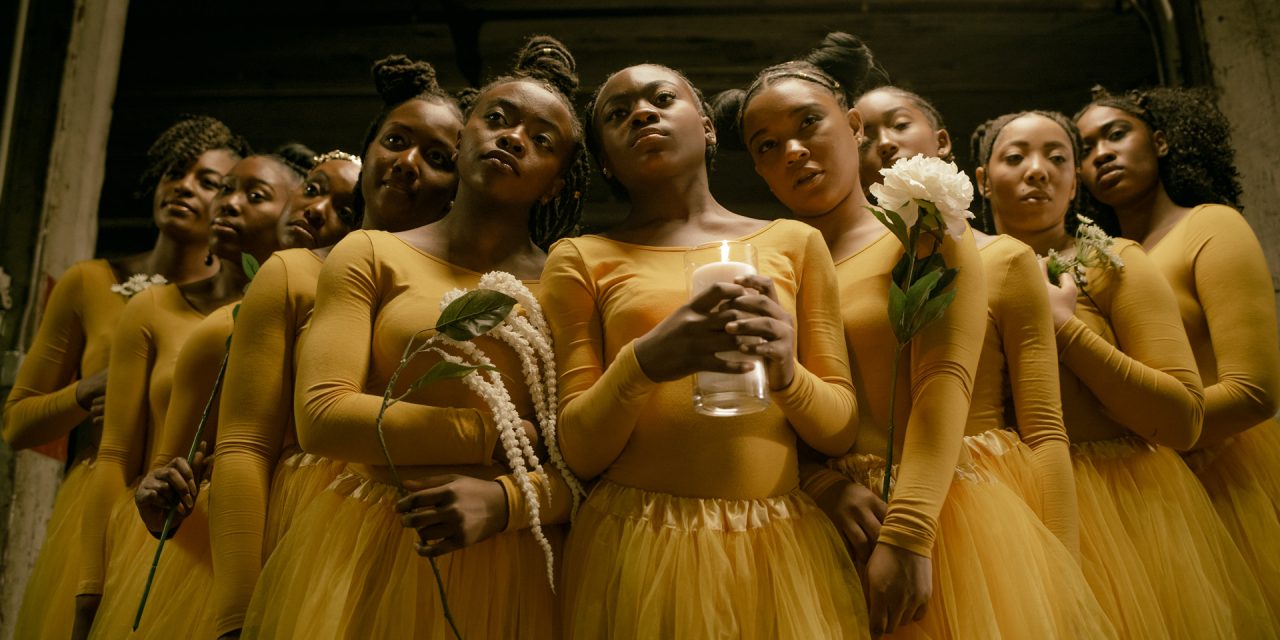 Due to the COVID-19 outbreak, many film events and festivals have been canceled or postponed, such as France’s Cannes Film Festival. While some venues have taken their losses and planned for next year, others are releasing their films online. This shift toward the Internet was utilized by Emory to provide access for Lunafest on April 23.

Lunafest, organized by LUNA Bar and Chicken & Egg Pictures, is a film collection featuring short films made by and starring women. Emory’s Center for Women hosted a screening of this year’s selection online through Vimeo. Seven films were selected, ranging from documentaries to animations, all focused on the theme of female empowerment. 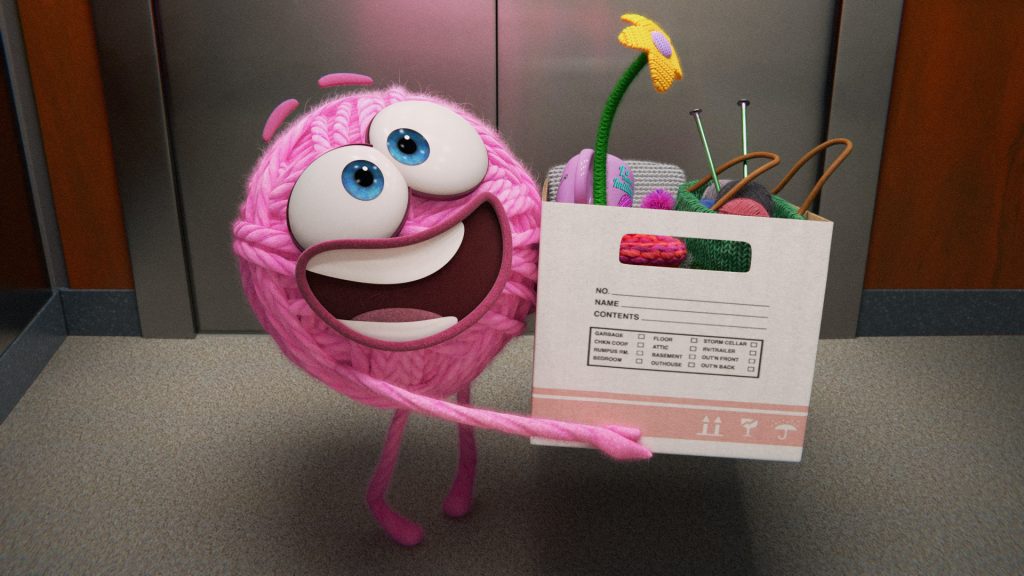 The first film to be screened was the Pixar produced and animated short film “Purl.” Directed by Kristen Lester and produced by Gillian Libbert-Duncan, the short explores Purl (Bret Parker), a sentient ball of yarn, as she gets a new job in a business made up of only men. At first glance, the short feels questionable, as the viewer is introduced to a world that only has men and a singular anthropomorphized ball of yarn. However, thanks to the introduction of other balls of yarn, the true theme of workplace equality is presented. “Purl” is a creative imagining of the workplace division of men and women and the power that can be found when people work in unison. 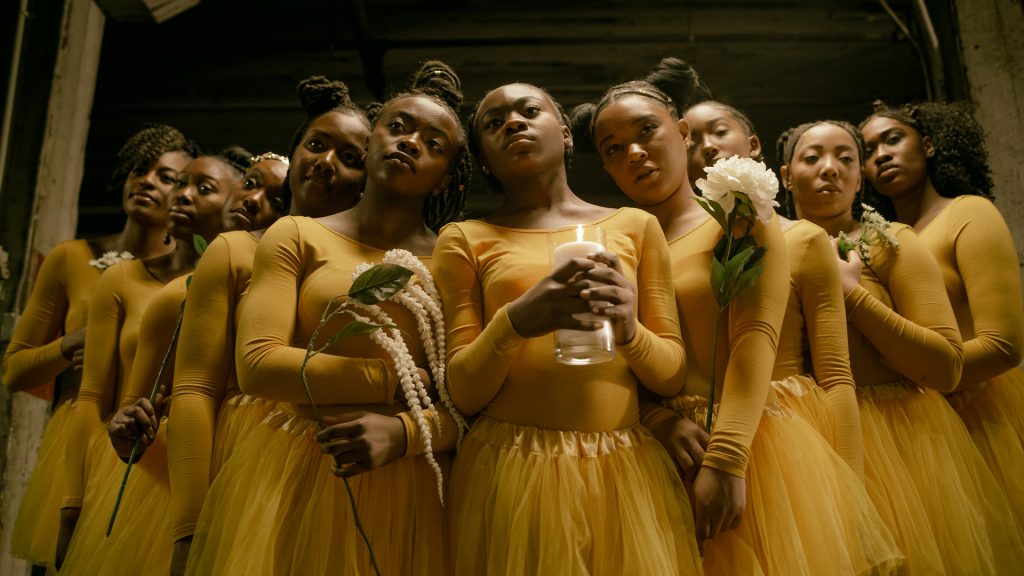 Next up was the touching documentary short film “Ballet After Dark,” an evocative exploration on the power of dance. Written and directed by Brittany “B. Monét” Fennell, the film follows Tyde-Courtney Edwards, a ballet dancer and assault survivor who developed Ballet After Dark, an organization that helps victims of violent situations through dance. The film explores Edwards’ idea blossoming into reality, along with dance’s ability to make people feel more comfortable with themselves. The use of ballet not only displays the organization’s talented dancers, but it also acts as a mechanism to move through parts of Edwards’ life, such as her assault, that she is unable to describe with words. It’s a film that will leave you hopeful for the future. 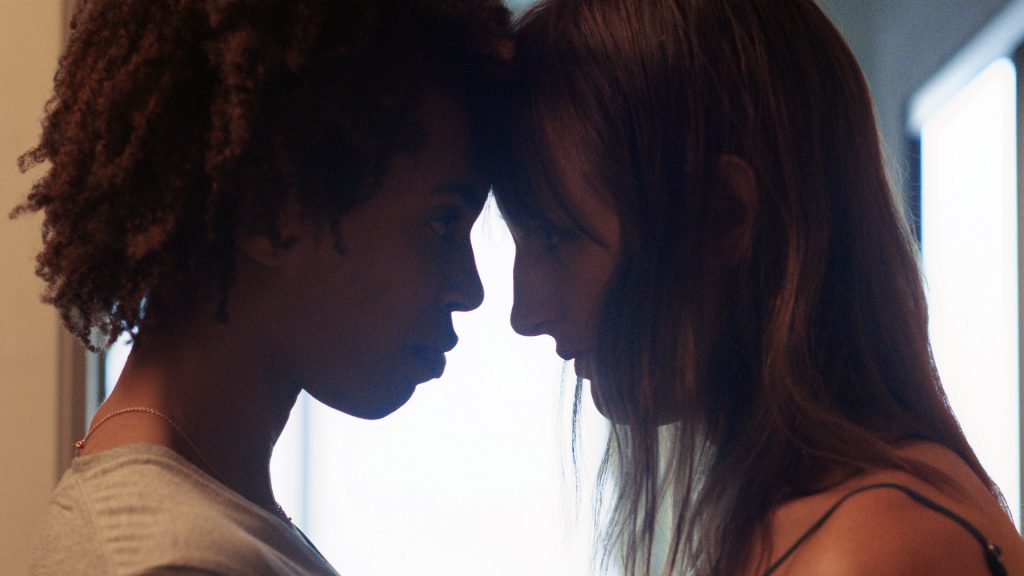 Jessica (Jen Richards) with her girlfriend (Alexandria Anderson)./Courtesy of Lunafest

After that was “There You Are,” produced and directed by Lisa Donato. It tells the story of Jessica (Jen Richards), a transgender woman who, because of pressure from her disapproving mother, must dress as a man to visit her grandmother before she dies. Donato’s cinematography included natural lighting and relied on diegetic sounds that contrasted the minimal dialogue. The opening minutes, where Jessica and her girlfriend are getting ready for the day, have almost no dialogue to accentuate the depressing tone of the film. This feeling of sorrow continues throughout toward a powerful ending, as her mother refers to her with her preferred name, exemplifying the importance of acceptance in times of tragedy. 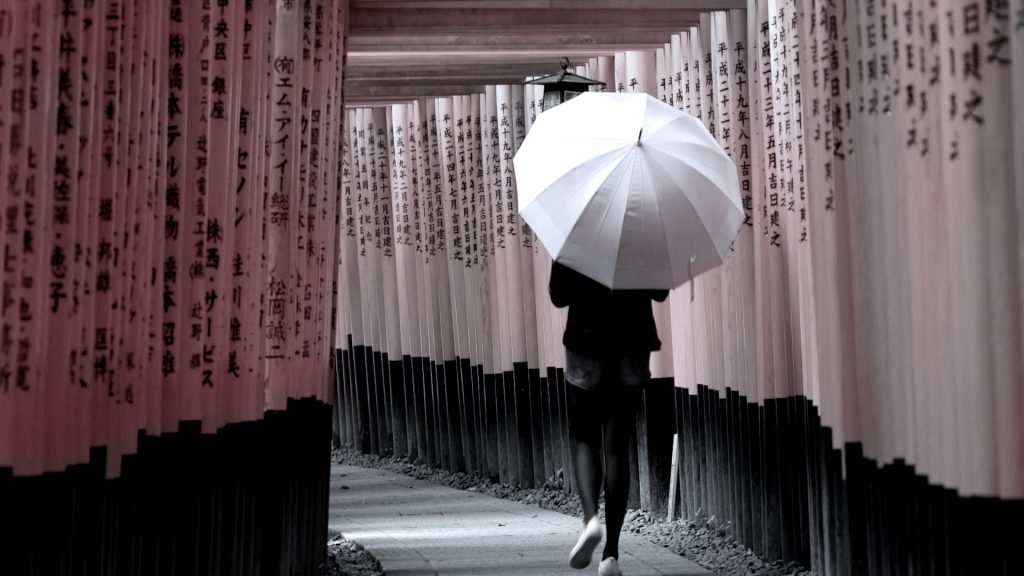 “Xmas Cake — This American Shelf-Life,” a documentary short directed by May Yam, played next. The film follows Petra Hanson, the writer and animator, as she explores what it means to age as a woman through the use of the term “Xmas cake,” a Japanese slang term referring to women above the age of 25. The film is an amalgamation of events in Hanson’s life, such as her time in the J-pop band Gaijin à Go-Go, and animated scenes that are presented to resemble Japanese ink paintings. This film highlights society’s disregard for older women not only in Japan but across the world. However, these societal concepts did not hold Hanson back, as the film shows her success and ability to love herself. “Xmas Cake — The American Shelf-Life” may be a hard pill to swallow because of its depressing material but, by the end, inspires confidence for the future. 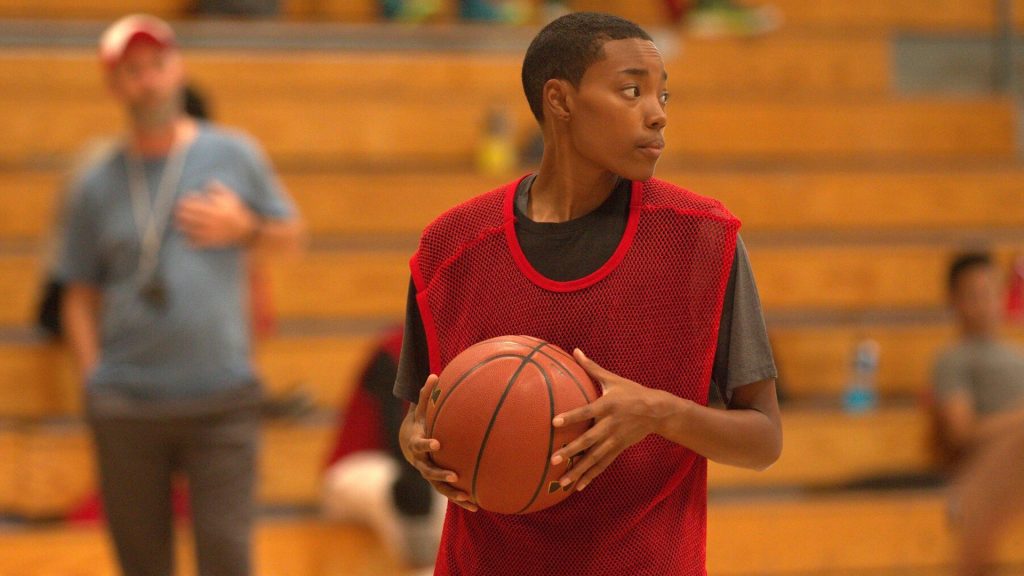 The next film was the high school sports drama “Game.” Written and directed by Jeannie Donohoe, the short follows A.J. Green (Nicole Williams), who is trying out to be a new member of the male basketball team. The film not only highlights the physical prowess of female athletes, but also how these talents are undervalued and recognized. Williams and Rick Fox, who plays the coach, both give emotional performances in this short film and provide inspiration for women pursuing sports. “Game” is a heartfelt drama that emphasizes the importance of giving people a chance. 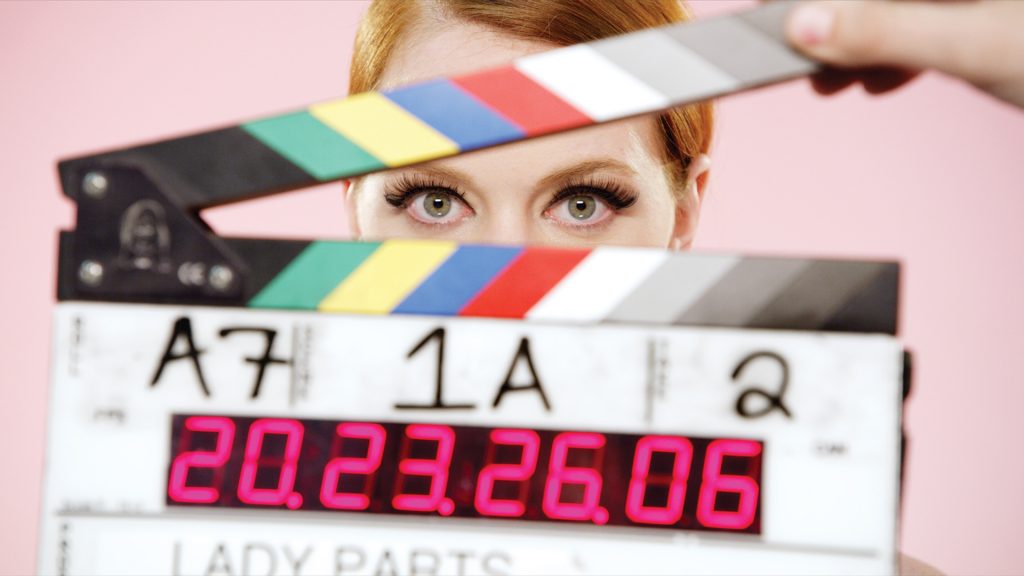 Liz (Erin Rye) before performing in a tampon commercial./Courtesy of Lunafest

Comedy satire “Lady Parts” followed. Directed by Erin Rye and Jessica Sherif, the film follows Liz (Rye), a struggling actress who deals with sexism in a male-dominated production. Rye’s humor and relatability makes her a standout, from her dancing in a tampon costume to her culminating monologue where she releases her anger onto the production team. The film also does an excellent job in spotlighting how frustrating male-dominated media productions are for women. However, “Lady Parts” is different from the other films shown through Lunafest, as it doesn’t offer a hopeful ending for the future, but rather, acknowledges the absurdity of men as the crew just looks for a new woman to replace Liz. This film, thanks to the ending, will make you laugh while forcing you to think differently the next time you see something on television. 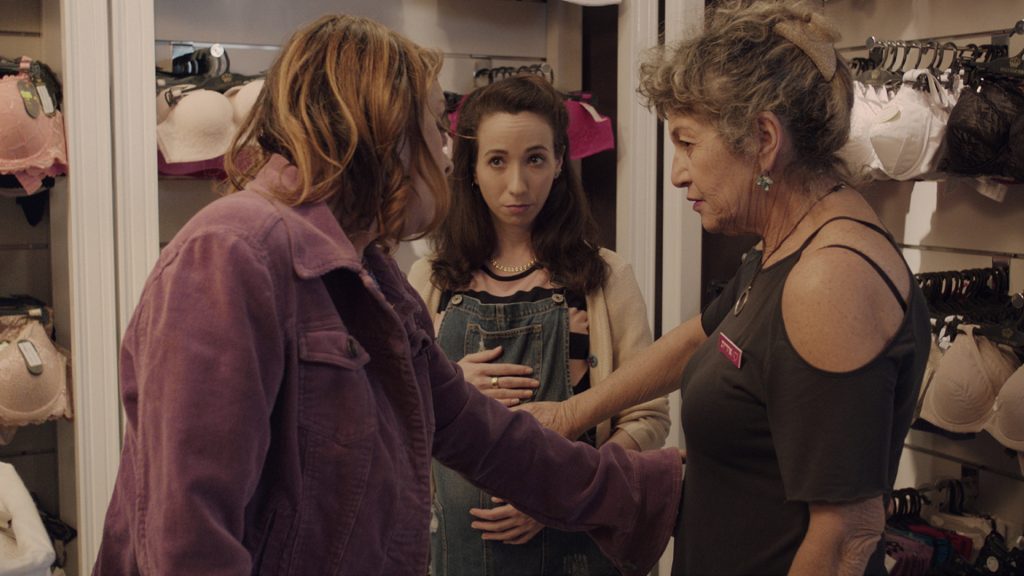 Finally, the last film to be presented was the Israeli drama “How to Swim.” Written and directed by Noa Gusakov, it follows a pregnant woman named Avigail (Dina Senderson) who spends the day with an older mother named Tammy (Orly Silbersatz) who she meets at the doctor’s office. The film details the important dynamic between women and their mothers, as Avigail views Tammy as a maternal figure. The two women embark on an adventure at the mall together and learn the importance of one another. While the film ends with the two women going their separate ways, the viewer can tell that the experience was valuable for both, as Avigail’s fear of being a mother has lessened and Tammy is able to act as a mother again. Lunafest ended on a high note with this compassionate film about what it means to be a mother.

With seven consecutive films, Lunafest highlighted some of the women who are establishing themselves in cinema. Before their films began, each director introduced themselves, allowing viewers to create a bond with these talented women. Cinema has a long way to go before becoming more inclusive, but the filmmakers shown from Lunafest are helping to accelerate this process and are providing hope for other female filmmakers.