The Lumineers Light Up Duluth 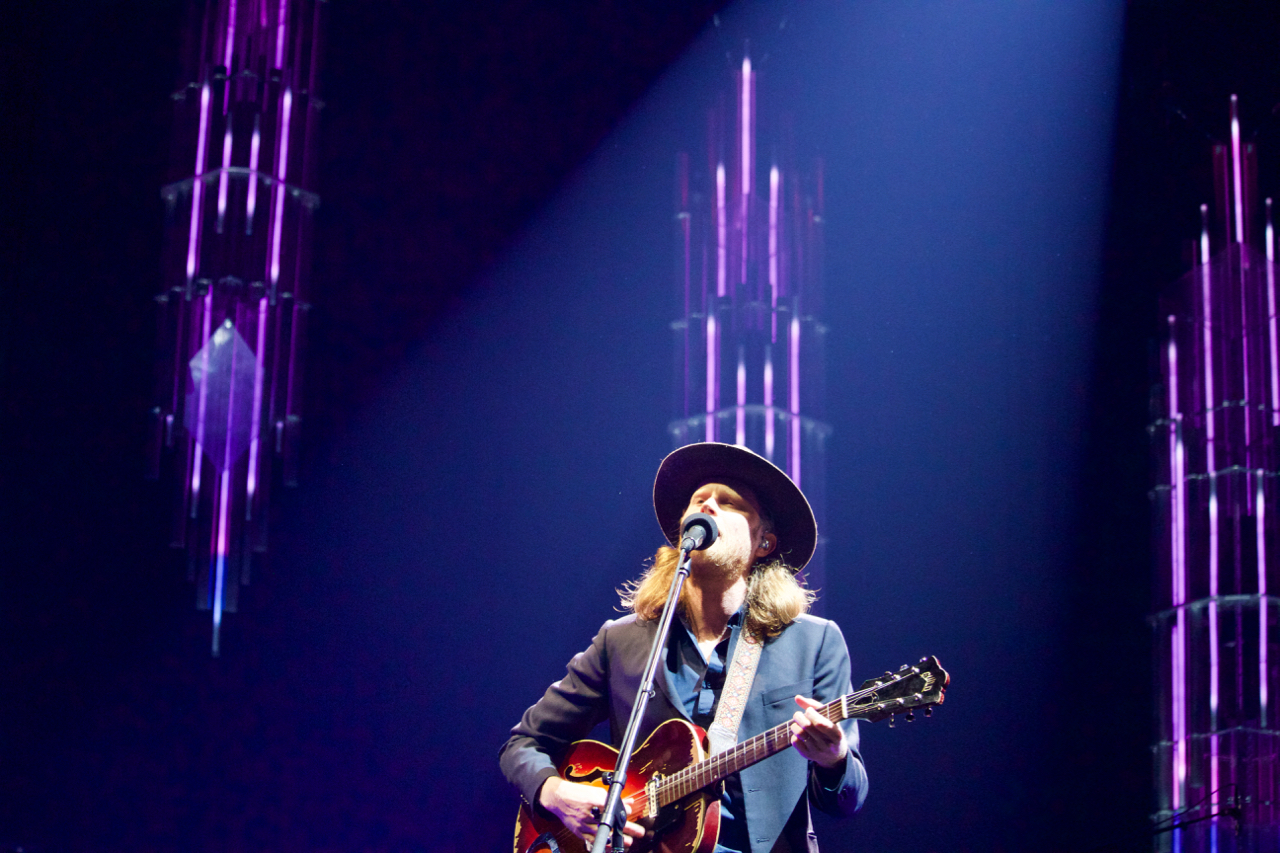 In a near-perfect display of the power of The Lumineers’ sophomore album Cleopatra, the band played at the Infinity Energy Center March 8 for their Cleopatra World Tour. The concert was a culmination of mellow, bashful lighting, reserved set design and genuine but demure headlining performance. From its start, the performance was clearly a show aimed to make its audience members feel as equally at home in the Infinite Center Arena as in quaint cafe — no small feat in an arena that seats 10,600. Yet from the band’s opening number, the upbeat “Submarine,” to their final farewells, The Lumineers met their large audience’s expectations.

The Lumineers, composed of vocalist and guitarist Wesley Schultz, drummer and pianist Jeremiah Fraites and cellist and backing vocalist Neyla Pekarek, began their journey in Denver in 2002, later rising to stardom with their hit “Ho Hey” in 2012.

Despite the show’s success, The Lumineers faced a daunting challenge: performing music from two contrasting albums. If their self-titled first album is a flirtatious first date with the world, Cleopatra is the band’s divorce — it is far more somber and reflective. Schultz exudes a weighty deliberateness as he sings about desire and mortality.

However,  it became clear early in the evening that Schultz would handle the dissonance in styles well. The Lumineers dispensed with their more whimsical and popular songs in quick succession at the top of the show, following “Submarine” with the effervescent “Flowers in Your Hair,” the ubiquitous “Ho Hey” and the obliquely existential “Cleopatra.” Though it felt strange to watch the band burn through their most anticipated hits up front; it was their only strong option. Unlike other stars such as Billy Joel or Bob Dylan, The Lumineers are still too young to fill a concert with hits. By deflating the anticipation for songs like “Cleopatra,” The Lumineers could relax and refocus the audience on the band’s lesser known songs.

Openers Susto and Kaleo both played excellent sets, though neither provoked the same exuberant response from the audience as The Lumineers. Kaleo, an Icelandic band more rock than folk, energized the audience with dramatic, pulsating lighting to compliment the band’s simpler lyrics. Touring with Kaleo was a smart decision. Kaleo’s straightforward and electrified performance provided a pleasing contrast to the more mellow, lyric-obsessed headliner band.

Much of The Lumineers’ music seems as though it might be out of place in an arena —  “Classy Girls” and “Gun Song” scream to be played in the basement of a bar. Schultz seemed to be awestruck that the group was fortunate to be playing such a venue on their third trip through Atlanta.

In a clever solution to a longstanding mismatch between large venues and the folk genre, The Lumineers moved to a small, raised platform in the middle of the audience about 25 minutes into the show. Their rendition of “Classy Girls” felt far more intimate from the platform.

Clearly, The Lumineers wanted to connect with their audience. Moving to the platform helped, as did a jaunt by Schultz into the bleachers during the radio-hit “Ophelia.” Though he was singing to an audience of thousands, Schultz’s habit of preceding songs with short vignettes gave an intimate touch to the show, as if those stories were being told at a kitchen table over dinner.

And like what might occur at any kitchen table, The Lumineers found themselves making frequent political references. Before “Charlie Boy,” after telling a moving personal story about his deceased uncle, Schultz told a hushed crowd that “it’s important what our leaders say; their words are important” in his first of multiple jibes at President Donald J. Trump that evening.

Later, when they played “Big Parade,” a protest song, Schultz changed the lyrics to “blue eyed boy in real estate/I didn’t vote for him, the candidate,” another knock at Trump, which drew thunderous applause from the audience. At their Music Midtown performance this past fall the band changed the same song to: “blue eyed girl, United States/please vote for her, the candidate.”

As the show came to a close, The Lumineers performed some of their unpublished work and covers. They covered “Walls” by Tom Petty and “Subterranean Homesick Blues” by Bob Dylan. The lackluster tribute to the “heartbreaker” artist was more than made up for by the superb rendition of Dylan’s song. Schultz also treated the audience to a unreleased intro to “Long Way From Home.”

Yes, The Lumineers’ would probably be better enjoyed in a smaller venue, but the band’s care for their music was admirable and compelling, as was Schultz’s desire to connect with fans. Unlike many artists today, The Lumineers’ care for each of their well-crafted lyrics is luminescent, something that shines through all else in the Cleopatra World Tour.