‘Love’ Can Be A Little Too Real 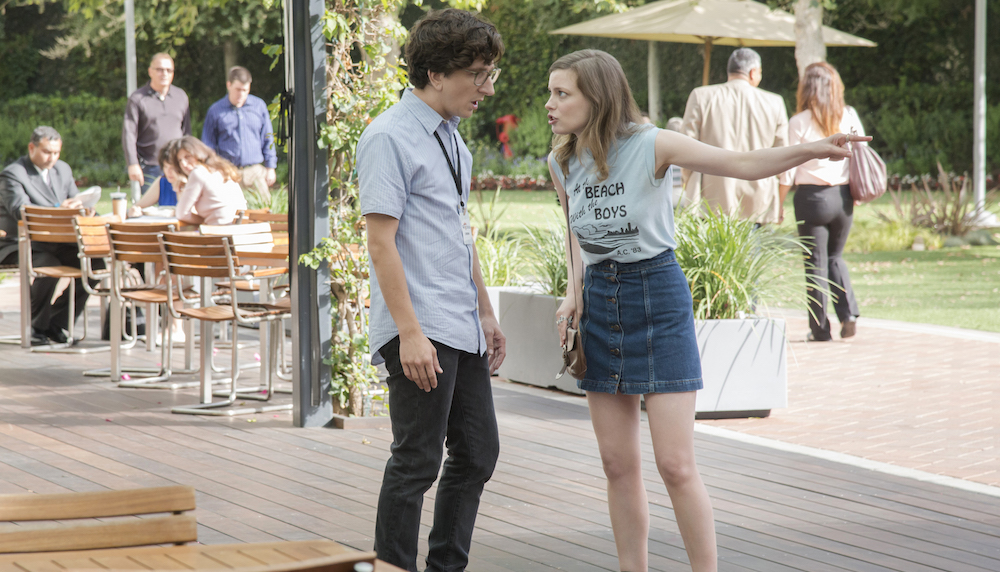 I spent the weekend wrestling with Love. The newest Netflix binger, a Judd Apatow production starring Community’s Gillian Jacobs and alternative comedian Paul Rust as two fundamentally damaged people navigating the world of twenty-something romance, is a little bit of comedy, a little bit of drama and a whole lot of discomfort. It’s the kind of show in which I found myself constantly torn between (mentally) screaming at it for putting me through what it did and finding something within it that is charming, complex and interesting.

Love comes at the tail-end of a brief moment of the rom-com television show genre when everyone thought the best way to move through serialization was to show a relationship unfolding in real-time. Essentially, whole shows revolved around either the “will they, won’t they” of the first half of any sitcom romance (see Ross and Rachel, Jim and Pam) or the early days of the romance that we all quickly grew sick of once the anticipation and tension was gone (see Jim and Pam).

Shows like A to Z, Manhattan Love Story and Selfie largely failed to get off the ground with audiences, due to the fact that we, as an audience, like our romances to resolve. However, the nature of television is to leave the romance open-ended and full of possibilities, far beyond the point where we would be okay with seeing a story solely focused on romance venturing.

Then came You’re the Worst and Married. Two FX cable shows that took a different approach and signaled the direction of where the rom-com television genre may be headed. Getting into the relationship wasn’t the focus in these shows; it was almost a foregone conclusion the shows drew. Rather, they explored the way that relationships change us. You’re The Worst portrayed this by analyzing what happens when toxic people fall in love, while Married showed the slow evolutions that come with being married.

Love takes the baton from those shows, especially from You’re The Worst and its analysis of toxic relationships, and gives it a deep, real honesty largely thanks to the freedom afforded by Netflix to old hand Judd Apatow, working more in his This is 40 mode than his Trainwreck mode.

As with any romantic story, the core foundation is its lovers. This is where Love is particularly fortunate, which is partially due to show creator and star Paul Rust, who has flickered on the edges of alternative comedy and brought an interesting modern Woody Allen presence to Love. He perfectly portrays not only the necessary neuroticism required for Gus but also exhibits a sort of fearlessness. He’s not afraid to be seen as an asshole or for you to be baffled by his decisions, a remarkable risk for a young actor to take.

It is Gillian Jacobs who gives Love its core and heart as Mickey. Reminding me of Aya Cash in You’re The Worst (a performance I named best of the year last year), Jacobs finds an unflinching honesty, a lack of vanity similar to her co-star Rust, and layers it with an intense likeability no matter what she’s doing. She creates a complex character who feels real to the conflicts and addictions that she’s afflicted with. It’s a character that could easily be cartoonish and unlikeable, yet Jacobs keeps her grounded in a very realistic conception of who this character needs to be, and therefore, what the show needs.

I’ve used the word realistic a lot, and I think that it is the most accurate word to describe what Love is attempting to portray. It’s very much trying to create a real world conception of how relationships can evolve, with all the complexities and, more importantly, all the flaws. Love is about two fundamentally damaged people undergoing a relationship and that might be the most difficult thing about grappling with the writing of the show.

Love can be hard to watch. From episode one, it crushes our expectations by having the two leads not meet for the whole duration of the first episode, then having them “get together” halfway through a 10 episode season, knowing that we expect for the show to keep us waiting until the season finale. And through its story, it tinges happy moments, the typical beats of a romance story, with darkness and … well, maybe not cynicism, but something that seems deliberately against something as simple as a happy ending that the typical romantic lead character deserves.

Because these two characters deserve something very different. They’re not great people, and Love never wants you to forget that. They have charming qualities, but each possesses less than desirable  traits as well, which is part of the difficulty of watching Love. If you aren’t a fan of watching toxic people be toxic to each other, this may not be the show for you.

Although I make this sound like some horrifically unpleasant show, it’s not. It’s consistently handsomely shot, well-acted and humorous in many ways. The latter two are mostly thanks to supporting actress Claudia O’Doherty as Bertie, a delightfully sweet Australian girl who gives the darkness surrounding her character a spot of light.

But it’s a show that portrays vulnerabilities, the rawest aspect of being human. Watching this, I was better able to recognize aspects of myself and aspects of the disastrous relationships and qualities of others. It’s hard to comfortably sit through episodes because the show is so critical of Gus and Mickey. When you start to inevitably identify with either of them, it’s hard to feel like Love isn’t showing you how awful people can be in relationships.

Perhaps the worst part is just how right Love seems to be.