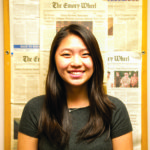 Executive Editor Michelle Lou (19C) was elected the next editor-in-chief of The Emory Wheel Feb. 18. Current Editor-in-Chief Julia Munslow (18C) will leave her position March 12. Lou and her incoming executive board will assume their roles after Munslow’s departure.

In her election speech, Lou said that as editor-in-chief she would increase journalistic training across all sections; strengthen the working relationships with the section editors; push reporters to develop relationships with sources; and increase “the diversity of perspectives” represented on the paper.

Lou, a political science major, joined the Wheel her freshman year as a copy editor. She was promoted to assistant copy chief her freshman year in Spring 2016 before she became copy chief in Fall 2016 during her sophomore year. Lou subsequently served as news editor the spring of her sophomore year before she was promoted to executive editor in Spring 2017 of her junior year. Last summer, Lou worked as the copy desk intern at USA Today.

Under Lou’s leadership, the news section has published several notable stories, including the award-winning coverage of the Migos booking scam and the most recent SGA election campaigns.

“It [serving as news editor] was really hard for me at first because I had never done any news writing before [I became news editor],” Lou said. “We’ve had some pretty big stories, and I’m really proud of where the news [section] is right now.”

Lou expressed excitement for the paper as she explained her decision to run for editor-in-chief.

“I really love the paper and believe in what we do,” Lou said. “Every time someone turns in a story, they are making Emory a better, more informed place.”

“I’m really lucky that a lot of my platform and Michelle’s platform overlapped, so those things will hopefully come to fruition under Michelle,” Compton said. “Michelle was a worthy opponent and is very capable of this role. I am excited to see where the paper goes under her and am hoping to work with her in the year to come.”

Lou and Compton both stressed the importance of building a stronger sense of community within the Wheel and expanding coverage on Emory research.

“My decision to run surprised some people, but I’m hoping that it sets a precedent on the Wheel that if you are qualified and have passion for this, you should go after positions,” Compton said.

“I’m proud of the voter turnout and competitive election — it shows that everyone is invested in the future of the paper,” Munslow said. “Both candidates ran impressive campaigns.”

News Editor Alex Klugerman (20B), who worked closely with Lou throughout his time at the Wheel, said he believes Lou will make a “wonderful” editor-in-chief.

“She excels at all aspects required by the job,” Klugerman said. “She is a great detailed writer, an investigative reporter; she always makes sure that we have every detail of the story we need. She also is a strong editor — she cares deeply about ethics.”

Munslow, who has also worked closely with Lou, said that Lou is an experienced and capable leader who is fully committed to the Wheel, citing the development of the news team under Lou’s leadership.

“I have watched her really manage the news team and build it and grow it,” Munslow said. “I … see her as a leader who supports her team, someone who is willing to put in the work. I think that most people only see about half the work that she does for the Wheel. … She’s going to do a fantastic job.”