Editor’s Note (5/1/21 at 2:23 p.m.): This article stated that the Center for Election Innovation & Research (CEIR) asserted that the SB 202 bill expanded voting access to marginalized groups. In fact, the CEIR did not make such a claim, but rather that the bill was a “step backwards” for Georgia. You can find the CEIR’s statement here.

The national outcry over the passage of SB 202, a Georgia law which aims to promote election integrity by amending state electoral procedures, is one of the most egregious examples of political groupthink in recent history. Groupthink is a psychological phenomenon that occurs when the masses choose to believe a narrative propagated by societal institutions and view dissent as impossible or immoral. Sensationalized media coverage of this law’s passage has perpetuated a public perception of the law’s content that greatly differs from reality. While corporations, professional sports and the media cry voter suppression, the state legislature just passed a bill that will strengthen public confidence in elections while simultaneously expanding access to the voting booth for economically disadvantaged persons. 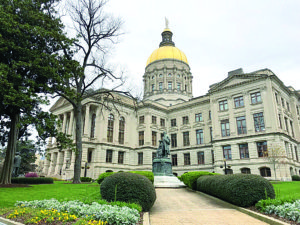 President Joe Biden said that this law “makes Jim Crow look like Jim Eagle.” Putting aside the bizarre phraseology in the latter half of this comment, any comparison to the horrifying legislation that expressly prohibited contact between individuals of different races in public spaces is not only completely unfounded, but deeply offensive, and it does a tremendous disservice to those who endured great suffering at the hands of these laws. After Biden made these comments, all the president’s men fell in line and expressed their outrage, vocally or with boycotts, without mentioning a specific part of the law they had problems with. Among them are Rob Manfred of the MLB, Ed Bastian of Delta, James Quincey of Coca-Cola and a coalition of 72 high-ranking Black corporate executives. Bastian didn’t have a problem with the bill when he was consulted by Gov. Brian Kemp during its drafting. Outrage increased after the media, including The Emory Wheel’s very own Editorial Board, labeled the bill with buzzwords such as “voter suppression” and “Jim Crow.” The MLB, by electing to move this summer’s All-Star game out of Atlanta, stripped a majority Black city of $100 million of economic activity, at a time when small businesses and the hospitality industry are being hit the hardest. The move came two days after Biden suggested that the league take this action in an interview on ESPN. Manfred cowered to curry political favor and maintain good standing with the federal government, on whom he relies for antitrust exemptions.

Perhaps corporations, the media and Biden himself should read the bill before spouting baseless claims about restricting poll hours that were given four “Pinocchio’s” by the fact-checkers over at the Washington Post. No-excuse absentee balloting was upheld, a practice many deep blue states such as New York, Connecticut, Massachusetts and Biden’s home state of Delaware, do not have. The bill extends the early voting period in Georgia, adding in an additional Saturday to accommodate wage earners who may have difficulty voting during the work week. Early voting in Georgia begins on Oct. 12, compared to Oct. 24 in New York. Furthermore, there were zero ballot drop boxes in Georgia pre-COVID. This bill not only allows, but requires that, going forward, each county’s election office “shall establish at least one drop box.”

As for all of the talking heads taking pity on parched voters waiting in line, the bill specifically includes a provision for poll workers to make “available self-service water from an unattended receptacle to an elector waiting in line to vote.” If someone’s mouth does get a little dry while waiting in line, they are welcome to help themselves to a refreshing beverage. This clause exists to prevent voters from being harassed by political operatives or fringe groups trying to change their vote. The only measure in the bill that actually makes it harder to vote is the photo ID requirement, which is hardly a barrier at all. 53% of Americans and 74% of Georgians support requiring a photo ID at the voting booth. Voters in Georgia can obtain a photo ID free of charge from their county registrar’s office. Those who claim this requirement is racist imply that African Americans and people of color do not have the agency to take the proper steps required to legally cast a ballot. A photo ID is required to board a Delta flight, to make a purchase at most liquor stores, to get a COVID-19 vaccine and to participate in a number of other societal activities. I suppose all those establishments are racist as well.

When it comes to free and fair elections, the left wants to have its cake and eat it too. They love to point out that a minority of Republican U.S. Senators refused to accept the outcome of the 2020 presidential election because of supposedly widespread voter fraud and irregularities. Trump claimed widespread voter fraud and irregularities in a number of states that swung the election in favor of Biden, but these allegations have not been substantiated in court, and are known to be untrue. What’s equally untrue and equally detrimental to public confidence in election outcomes is claiming that there is widespread voter suppression, as chief opponent of SB202 Stacey Abrams has done since her defeat in the 2018 Georgia gubernatorial race. In the gubernatorial election, Abrams alleged that her opponent and former Georgia Secretary of State Brian Kemp illegally purged voter rolls and took a number of other actions to suppress voter turnout in traditionally Democratic-leaning precincts. All of Kemp’s actions can be explained as routine under election law. To this day, Abrams has not formally conceded and claims she lost due to “an erosion of democracy.” A uniform standard should be upheld. Claims of foul play should be sorted out by the courts. If an election is legally certified by the appropriate election officials, and not overturned by the judicial system, the outcome should be accepted by the candidate that received less legally-cast votes. Trump and Abrams received less votes, they should have both conceded. Taking issue with one of these instances and not the other is partisan and inconsistent.

While corporate America acquiesces to Democrats in power, radical reform is being drafted in the halls of Congress. This fanfare is merely a guise to distract from the unconstitutional H.R. 1 bill which aims to give federal politicians even more top-down control. The one thing they can’t control is your mind, so please, before you post another Instagram story about how this legislation embodies the perils of systemic American racism, take a few moments to read this bill, and realize that election integrity and voting access are not mutually exclusive.