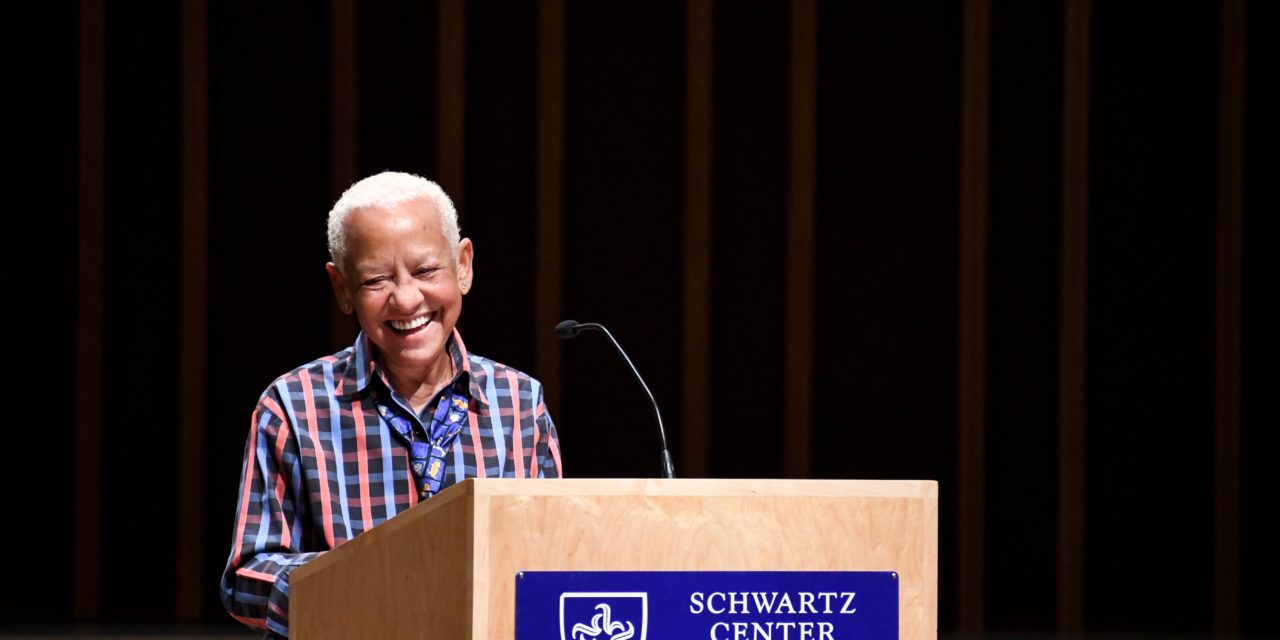 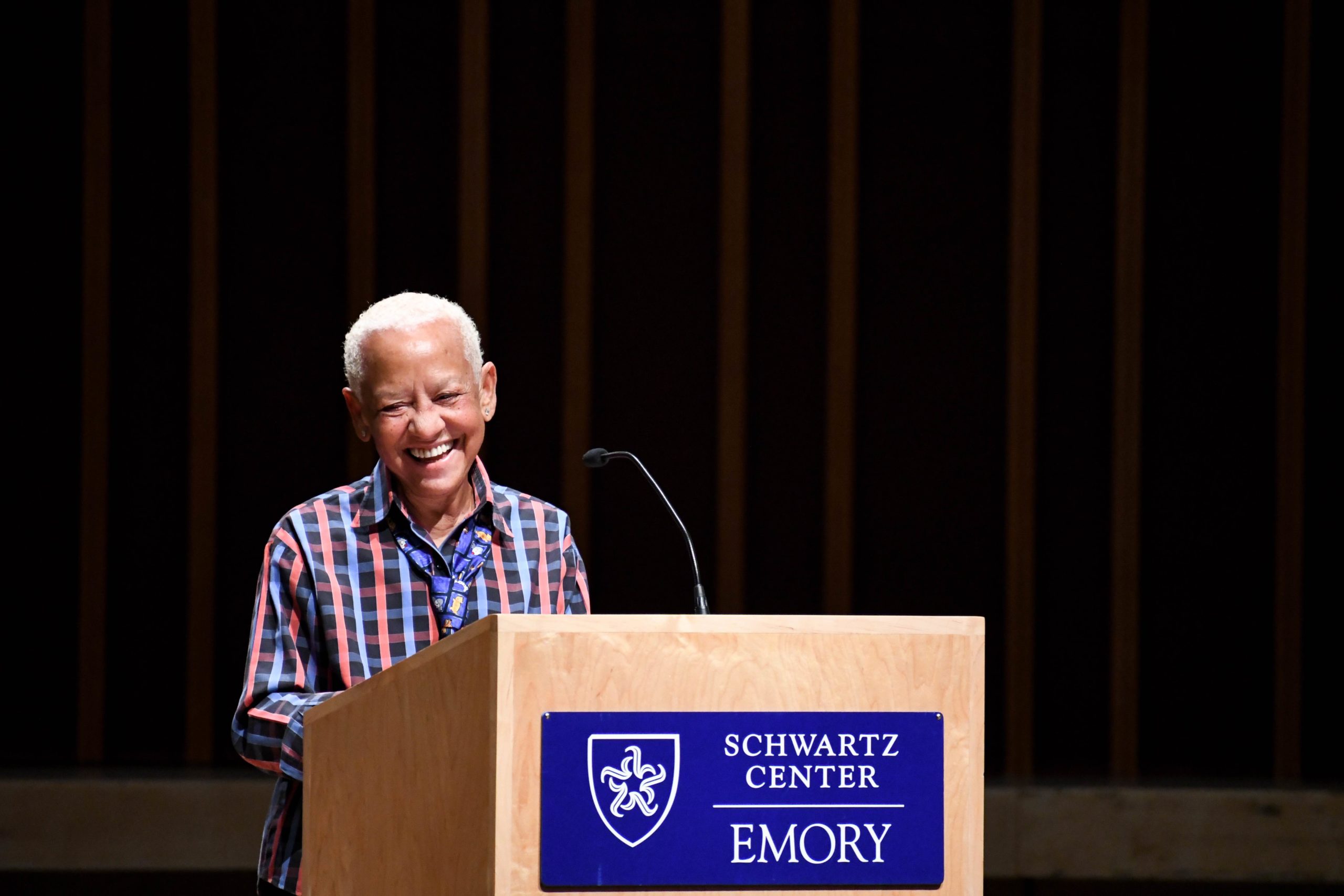 When asked what writing has taught her about people, literary legend, educator and poet Nikki Giovanni comically responded, “People are pieces of sh*t.” But despite the capacity people have to be cruel and unkind, she said, doing fulfilling work and having sound friends makes life worth living.

On Feb. 20, poet and Emory Creative Writing Program Director Jericho Brown moderated a conversation with Giovanni for about 30 creative writing students in Canon Chapel. Brown asked Giovanni illuminative questions about her relationship with boxer and poet Muhammad Ali, among others, and shared video clips from Giovanni’s life to situate questions about her Grammy-nominated poetry albums and relationship with writing.

The 1.5 hour-long event, organized by Brown and Nick Twemlow, the poetry and digital humanities librarian at the Stuart A. Rose Manuscript, Archives and Rare Book Library, was enrapturing. It gave a group of burgeoning young writers the opportunity to witness Brown, their academic champion, swoon in synergetic conversation with the black treasure that is Nikki Giovanni. The significance of this literary celebration, the legacy of both speakers and the prevalence of Black History Month resonated with the attendees.

Aside from Giovanni’s prowess and impressive literary work — Giovanni has won multiple NAACP Image Awards, the American Book Award and maintained friendships with the likes of novelist Toni Morrison — the event was marked by her wicked sense of humor, cool and certain confidence, and the wisdom she generously shared with Emory students on writing and life.

Giovanni asserted that “writers need to write for themselves” and that they’re their own “first audience.” She suggested that writing what one believes rather than what is popular is crucial.

She also playfully discussed her love for cooking oxtails and Harrods’ cashmere socks, and was moved to tears while summarizing her favorite book, Robert O’Brien’s “Mrs. Frisby and the Rats of NIMH.” But perhaps the most moving musing from Giovanni’s talk came when she spoke about the power of friendship.

Giovanni discussed the “Bench by the Road Project,” a project launched by the Toni Morrison Society that seeks to place benches at sites which commemorate “significant moments, individuals, and locations within the history of the African Diaspora.” Giovanni discussed her friendship with Morrision and said Morrison was her bench, a metaphor for friendship. She went on to address the importance of selecting confidants who could uphold us and, in whom, we could seek rest.

Following the intimate event on Thursday, Giovanni hosted a free public reading on Feb. 22 in the Emerson Concert Hall at the Schwartz Center for Performing Arts, hosted by the Creative Writing Program at Emory, the Emory Libraries, the Rose Library and the Hightower Fund. About 1,500 admirers from all over Atlanta set foot on campus to hear her speak, lining up outside of Schwartz as early as 1 p.m. for an event that would start at 4 p.m. (Yes, the line wrapped around the performance hall and even around the neighboring Goizueta Business School.) As expected, Emerson Concert Hall reached full capacity within minutes. There was not an empty seat in the 900-person capacity room.

Gabrielle Dudley, an archivist in the Rose Library, introduced Giovanni, proclaiming, “Oh, what a time to be alive!” The room buzzed with anticipation and excitement as attendees awaited the literary legend’s appearance.

As Giovanni finally stepped out on stage, the crowd immediately rose to its feet. She opened with sharing her passion for voting, saying that it is crucial and vital that we do. Her poem “Vote” perfectly captured her sentiment. She read, “As long as there’s any breath in my body, I’m gonna vote. They want to silence us, and I’m not gonna be silenced.”

The reading consisted of only five poems total. She spent the rest of her time on stage sharing memories, stories and knowledge that she accumulated in her life, such as when she met activist Rosa Parks in an airport.

She worked the crowd beautifully, earning laughs, cheers, praises and multiple standing ovations. She told her story of what it means to be a black woman, what it is like to have a black identity in America. This came through primarily in her poem dedicated to Martin Luther King Jr., selected from her yet-to-be-released book “Make Me Rain,” in which she asks, “How much pressure does it take to turn coal into a diamond?” She also discussed her grandparents, who took her in after she left home, and used them as a model for black love. She said that love is about the giving and the taking, and the willingness to do both.

“Love is about being old, and being old together, and waking up in the morning and fixing grits so that someone you love can have breakfast,” Giovanni said.

The audience was comprised mostly of black attendees, and their passionate reactions made it clear that Giovanni’s words and wisdoms resonated with many of them. She did not speak for them; she spoke with them, creating a community of strangers in that very room. It was a room of love. It is clear why Nikki Giovanni means so much to so many people. She is a revolutionary poet, yes, but it is more than that. It is what her poetry does.

In the Q&A session on Feb. 20, Giovanni said, “The role of the poet has always been the same: to tell the truth.”

And she does exactly that. Her poetry is political, representative, familiar and full of love. Giovanni said that she cannot change the world, but it is clear that she might as well have —  one poem, one word, one ounce of love at a time. 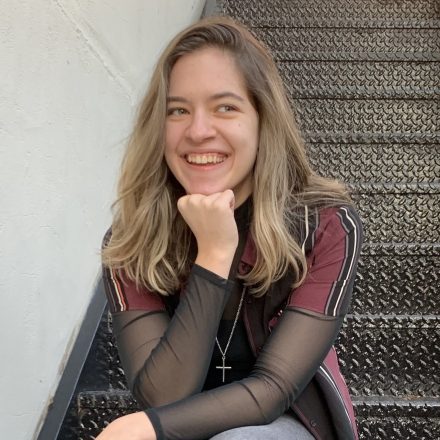 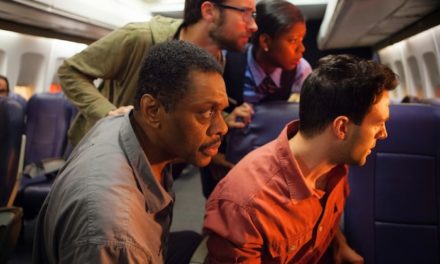 Unnoticed on Netflix: ‘Airplane vs. Volcano’ 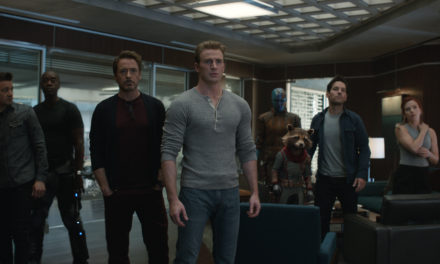