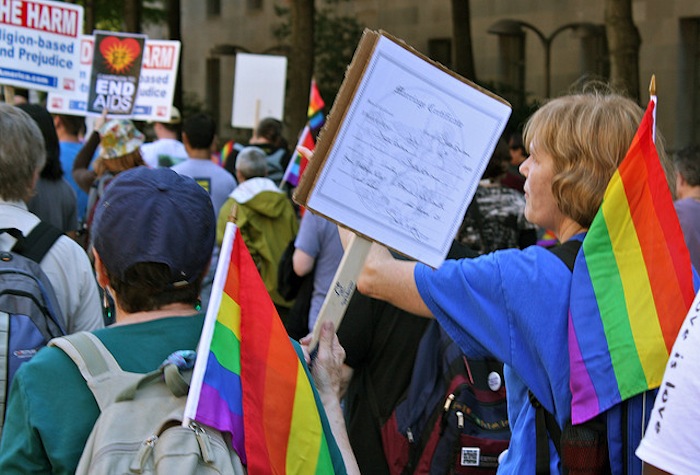 Mississippi, my home state, passed Senate Bill 2681 (SB 2681): The Religious Freedom Restoration Act (RFRA) last April. The deceiving title conveys a sense of progress, of protecting religious identities in a state where Christianity has been used to oppress non-Christians or even Christians of different races, backgrounds or ideologies. However, the bill, similar to the bill vetoed in Arizona in February, aims to perpetuate oppression of the same minority groups targeted throughout the state’s history. According to the bill, any private business, including medical practices, can refuse services based on “religious beliefs.” In practice, the bill is a tool of discrimination against people that don’t necessarily fit into the dominant stakeholder of Mississippi’s social wealth: white, straight, cisgender, Christian, able-bodied, upper-middle class men.

As a non-religious queer woman, I am one of the many Mississippians this bill targets. When the bill passed, the legislators of my home state told me that my voice is less important than Christians’ voices. The representatives of my family, my friends and my neighbors told me that my existence is not valid. I worried about my LGBT friends, still in Mississippi, who could be legally denied medical care when this bill became active.

The day SB 2681 passed was an emotionally devastating day for me. It caused me to reflect on my attachment to a state that failed to protect my basic human rights. It caused me to ask myself, “Why do I still love Mississippi? Why am I proud to be from a state that continuously invalidates my identity?” I found the answer in what made me love Mississippi to begin with: community and activism.

Mississippi’s progressive activists are unique. We are often found in small numbers in pockets around the largely rural, conservative state. We are angry and raw. We have not lost our culture in our frustration with our state. Our identity as Mississippians is crucial to our work. We embed our culture into activism: combining our politics with our sense of community. Our connection to our state is what equips us to be agents of change in our Southern communities. Because we are from Mississippi, we know Mississippi. We know how to address the ways our culture fails us while working to sustain the parts of it that make up who we are.

In October 2013 the Human Rights Campaign (HRC), the nation’s (financially and visibly) largest pro-LGBT organization, launched a three-year campaign titled Project One America. The campaign broadly aims to improve the conditions of the LGBT community in the South, who account for one-third of the nation’s LGBT population. The campaign is currently located in Alabama, Arkansas and Mississippi.

The HRC has received a lot of criticism, particularly within the LGBT community. The HRC has a history of excluding people of color, queer women and transgender people from its campaign work. It also has often chosen to invest its resources into marriage equality, which many queer people – myself included – argue is not the gateway to LGBT advancement. Marriage equality is not a fix-all solution; it will not solve the LGBT community’s inflated rates of homelessness, job discrimination or physical and sexual harassment. Because of the HRC’s history, I was not excited to hear that the organization would be coming into my state. I anticipated that the campaign would embody its name – treating Mississippi as a discontinuous piece of the United States, buying into the idea that Mississippi is intrinsically more homophobic than the rest of the nation.

The framework of the Project One America campaign has resulted in a divide between Mississippi activists and HRC employees. Since the HRC set up camp in Mississippi, it has not been receptive to the needs of community members or the advice of local activists. When activists in Jackson and the Gulf Coast mobilized to rally at the governor’s mansion in protest of the RFRA, the HRC failed to offer us any support. Instead, their response to the RFRA was to buy out a grassroots campaign that provided stickers to businesses who wished to advertise that they don’t discriminate. As a powerful national organization, the HRC’s voice could have held weight, but the Campaign remained silent. By doing so, the HRC failed as an ally to Mississippi activists.

Unsurprisingly, the HRC has not been vocal in Mississippi until recently, when two Mississippian lesbian couples announced that they were going to court to challenge the state’s ban on same-sex marriage. The HRC has piped up since the announcement was made; they’ve attended media campaigns and press conferences and supported the couples during the trial last week. The visibility of support from the HRC outshined the work of Mississippians who have been working toward marriage equality long before the HRC set up shop in the state. The Campaign even boldly stated that winning marriage equality in Mississippi was the “finish line” for LGBT rights.

Will there ever be a finish line for LGBT rights? If there will be, it is not currently in sight – in Mississippi, the South or the United States. Although marriage equality may be a reality in our generation’s lifetime, marriage will not guarantee true equality. Ask the 13 year-old boy kicked out of his home after coming out as gay to his parents, if marriage is enough for him. Ask the transgender woman constantly sexually harassed as she walks down the street if marriage will help her. Ask the lesbian mother who lost her job because she was outed by a coworker if her marriage could protect her job security. Ask the gender non-conforming person whose safety is compromised and identity questioned every time they use a public restroom, if marriage will solve their problems. Ask the bisexual high school student who can’t focus on her schoolwork because her classmates constantly verbally and physically bully her if marriage will make her stop considering suicide. The HRC has failed to address these questions and thus has failed to protect the livelihoods of LGBT people.

The HRC’s statement insinuates that once we overcome marriage inequality in the South, full equality will be established. This is a failure to recognize the needs of LGBT people and a blindness to the challenges LGBT people are facing across the entire nation – not just in the South. The HRC is blind to the fact that anti-LGBT discrimination and violence is a product of a system that values straight lives over our own.

The system isn’t only concentrated in my home state of Mississippi or any other Southern state – It is an endemic. Stigmatizing the South causes Americans to see us as separate from and more dangerous than the rest of the nation. Taking the responsibility of positive change out of the hands of Southern activists – and ignoring the work we have already done – implies that we are not equipped to address our own unique issues.

Because I love my state and I believe in its ability to improve, I want to be part of the reason why it changes. I want my voice to be heard because I have lived and witnessed what we activists are working to change. I want my culture to thrive as my neighbors and friends are empowered. I want to take what belongs to me – my human rights – myself, instead of waiting for an outsider to hand it to me. Because I am a part of Mississippi, I deserve to help Mississippi succeed.

Kayley Scruggs is a College sophomore from Jackson, Mississippi.