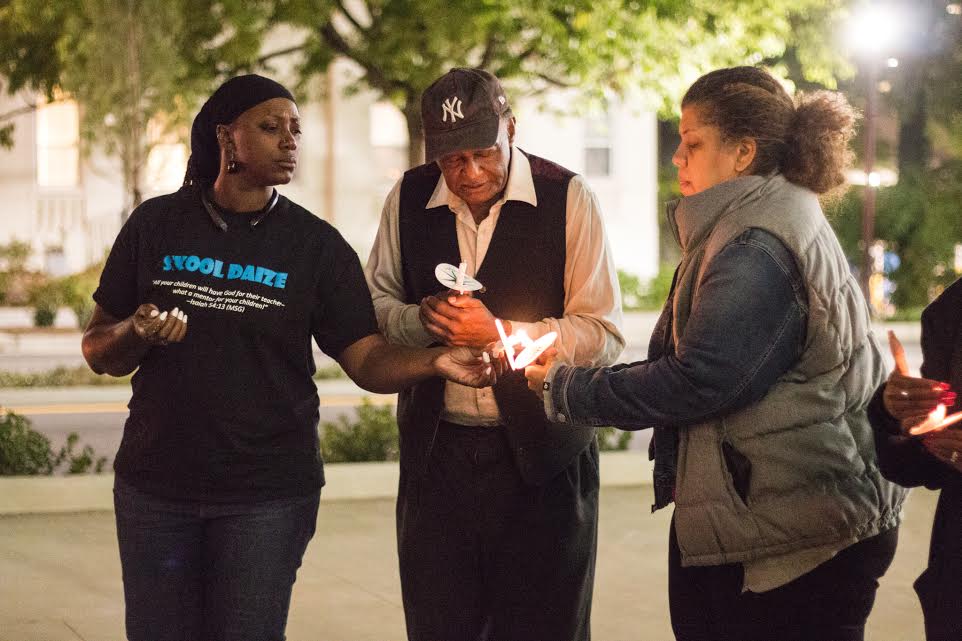 “Let the baby live” and “Shame on Emory” rang out next to Emory University Hospital (EUH) Thursday morning on Clifton Road, where about 40 protesters had gathered to protest the hospital’s decision to delay a child’s kidney transplant operation.

EUH had rejected a request for Anthony Dickerson to donate his kidney to his 2-year-old son, A.J. Burgess, even though Dickerson is a perfect match. The child was born prematurely without both kidneys, and EUH has delayed the operation from Oct. 3 until January 2018 at the earliest.

“When baby A.J.’s daddy was accused of committing a crime, not convicted, the forces-that-be, here at Emory University Hospital, decided to impose almost a death sentence on Baby A.J.,” Johnson said at the Sunday evening vigil.

EUH wrote in a letter to the child’s mother, Carmellia Burgess, that Dickerson must provide proof that he has complied with the terms of his probation for three months before the operation can occur. Dickerson was arrested Sept. 28 and released from jail Oct. 2, in time to undergo surgery for his son’s transplant, according to the Atlanta Journal-Constitution.

The child was hurried to the emergency room Sunday morning because of an abdominal infection, known as peritonitis, according to the AJC. The child currently undergoes daily dialysis and is also in need of bladder surgery, according to CBS46 News. The family is unsure whether he will survive until January 2018 to undergo surgery.

EUH has not changed its position on the transplant operation. Carmellia Burgess wrote in a Monday post on a GoFundMe page that the family is looking into the possibility of having the operation at another hospital, even if they have to travel across state lines.

“We are operating at a level of desperation,” said Mawuli Davis, the family’s attorney, at the vigil Sunday evening.

Director of Emory Healthcare Media Relations Janet Christenbury wrote in an Oct. 26 statement to the Wheel that EUH adheres to guidelines issued by the United Network for Organ Sharing (UNOS) when making decisions about transplants. EUH cannot provide information about specific patients.

According to UNOS guidelines, donors must be screened for good mental and physical health. A team of doctors, nurses, social workers and other professionals try to maximize the chance of success for organ recipients and minimize risk for living donors, according to the statement.

“Decisions regarding transplant or living donation are never made by the CEO or any other administrator not directly involved in the caregiving process; however, these administrators support the care team’s decision process and work to create an environment in which sound, ethical decisions are made in the best interests of our patients,” the statement reads.

“The [Thursday] march was a demonstration,” President of the United Youth/Adult Conference Michael Langford said. “[Friday] was strictly a spiritual warfare.”

“What does good behavior have to do with [the child living]?” Rice said.  “We are going to need to come out here and march some more.”

Langford prayed that God would “move on the hearts of those who are sitting on the seats of power at Emory Hospital.”

The group is organizing a Nov. 1 worship service to support the child.

Former Atlanta City Councilman and radio host Derrick Boazman helped organize the Thursday protest in an attempt to reverse Emory’s decision. He promoted it on his radio show “Too Much Truth with Derrick Boazman,” Twitter and Facebook.

Boazman added that he would continue to plan more protests until the live-saving surgery occurs.

Rice, who was also at the protest, said that he believed the hospital’s decision was partially influenced by race.

“[It is] difficult to not argue that if this baby was a white child, the transplant would’ve taken place,” Rice said.

“If we don’t stand up for the life of a two-year-old that can be saved under these conditions, what do we stand up for?” Jihad said.