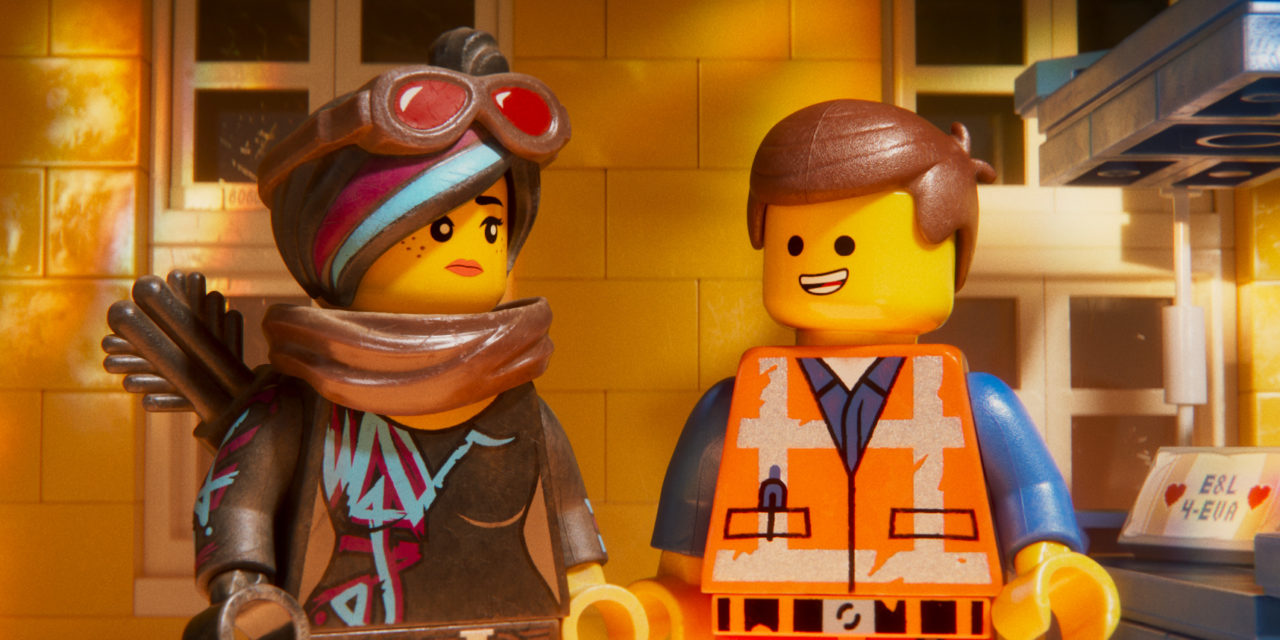 The appeal of 2014’s “The Lego Movie” is surprising and odd in hindsight. An animated family film about a toy brand marketed primarily toward children received fairly widespread love and appreciation from all ages. From the excellent comedic pace to the lively animation style, the film constructed a lovably creative world for audiences to engage with. “The Lego Movie 2: The Second Part” brings many of those great elements back into play. However, the “The Lego Movie” ending leaves the sequel having to juggle new and recurring dynamics while also trying to find a new heartfelt message, which hinders the sequel in living up to what made everything awesome in the original.

After the alien Duplo (Lego’s toddler-marketed counterpart) entities invaded the main characters’ home city of Bricksburg at the end of the first film, “The Lego Movie 2” begins when Emmet Brickowski (Chris Pratt), Lucy (Elizabeth Banks) and the other Bricksburg citizens are forced to flee the continuous destruction to live in gritty Apocalypseburg, where they won’t attract the aliens’ attention. But while everyone else has received a new brooding, dystopian outlook, Emmet is still the same “Everything is Awesome” guy. But when an alien, General Chaos (Stephanie Beatriz), kidnaps and escorts Emmet’s friends to the distant Systar System, Emmet rises to the challenge to save them. Along the way, he meets his new masculine mentor, Rex Dangervest (also voiced by Pratt), all while Lucy is attempting to stop the self-proclaimed “not evil” Queen Whatevera Wa’nabi (Tiffany Haddish) from causing the apocalyptic event known as “Ourmomageddon.”

Most of the best pieces of “The Lego Movie” are still present, but the sequel’s structure causes some problems. While both this film and its predecessor revolve around preventing the end of the world, this film separates our main protagonists from each other, which disrupts the previous film’s comedic dynamic. Performances from the returning actors are mostly on par with their previous as these characters; Pratt does an exceptional job in both roles, Banks balances Lucy’s personality conflict and Will Arnett is still funny as ever as Batman, yet their lack of interaction diminishes the strong humor. Newcomers Haddish and Beatriz are limited by their respective straightforward villain and henchman roles, which lack the distinguishing quirks that make the other characters so endearing. The laugh out loud comedy is still present at times, but it’s broken up and awkwardly paced.

A healthy dose of self-awareness helps balance the humor and concept of “The Lego Movie,” but the sequel indulges in its meta-jokes to a degree that makes finding a moment when a character isn’t (figuratively) winking at the camera difficult. Constantly alluding to the film’s own knowledge of its tropes and convolution wears the comedic value thin, and distances the audience from the narrative and the characters by reminding them that they’re watching a movie. The story does have to cope with the fact that the original’s ending revealed the plot to be a play-narrative framed by the family (in the sequel’s case, the older brother and younger sister) playing with the Legos, which “The Lego Movie 2” can’t ignore or shy away from. Yet by cutting to the real world throughout the plot, the primary story becomes dependent on the meta-narrative rather than enhanced by it. And while the real-life story has its poignant moments, it feels lackluster in comparison to how “special” the ending of the first film was.

“The Lego Movie 2” is also surprisingly musical. For a kid’s movie, this may not be unusual, yet when “The Lego Movie” and the spinoff “Lego Batman Movie” both had only one big diegetic number that either served the plot or played to great comedic effect,  it seems out of character for this movie to incorporate multiple songs that offer some style but far too little substance. “Everything is Awesome” is reprised on multiple occasions, along with at least three new songs that don’t quite manage to nail the comedic tone of the movie while further indulging in the already overused self-aware humor. These sequences are well-constructed, but feel more like unnecessary spectacles targeted at younger audiences that dampen the film’s broader appeal.

Regardless, a Lego set in which the pieces don’t fit together perfectly is still fun to build. “The Lego Movie 2” still assembles the cute moments that can make the inner kid in any audience member smile. Certain performances may carry the comedy of the film, but the returning cast manages to elicit some laughs. “The Lego Movie 2” is an unfortunately shoddier version of its predecessor, but it still constructs a solid movie that shows why “everything is cool when you’re part of a team.”