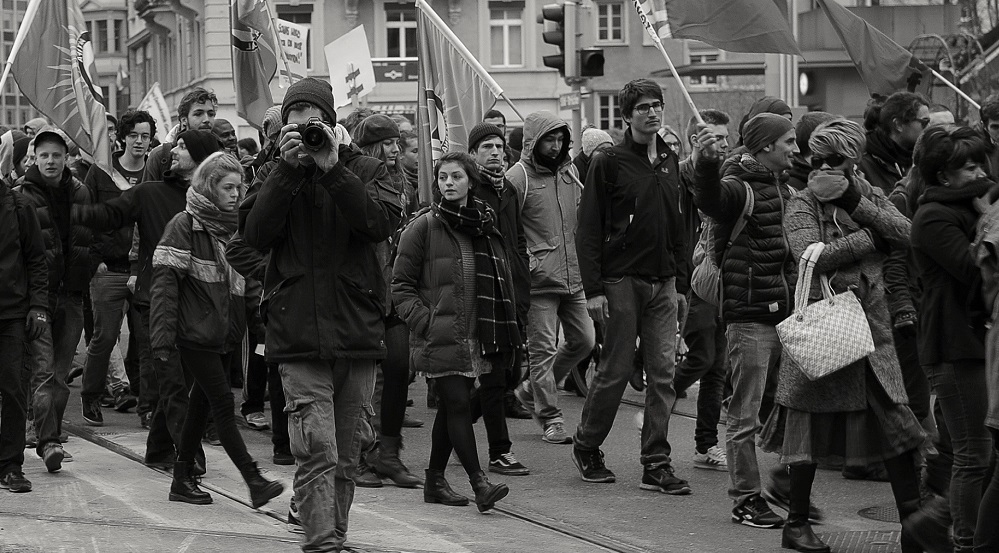 Around the world, couples celebrated Valentine’s Day this past Saturday. The usual litany of plastic junk and chocolates filled drug stores, and every ad on the radio may as well have been for rings and pendants (sold with a smooth, warm voice, naturally). For the single people or the perennially cynical, however, the holiday marked a prime opportunity to flex their easy disenchantment. The Valentine’s Day cliché is, of course, “Ya know, the card companies came up with it.” And, though it’s a bit of a misrepresentation … yes, the card companies did come up with it. If someone’s really engaged, they’ll offer vague criticisms of the holiday’s artifice and consumerist frenzy. All of which are totally accurate.

And things usually just trail off after that. This isn’t limited to witty putdowns of a fake holiday — maintained social criticism and engagement can be lacking in an environment that fosters hyperkinetic exchanges on a posture-oriented social media. We — the Millennial generation — are witnessing a period of sustained decentralized social activism. What differentiates us is our ability to distribute information quickly, foster discussion and organize direct action without a large centralized leadership apparatus. All of this means that Millennials are able to respond in force with unprecedented agility, as proven in the past year in Ferguson, Missouri and New York City following the murder of Michael Brown and Eric Garner. There are so many great young people working towards greater social justice.

But there can be limitations. A great deal of ink has been spilled, mostly by old guard publications like Forbes and Time, on the supposedly endemic laziness of Millennials. It’s hard to take a lot of these claims seriously, when most of the complaints appear to me as economic in origin and the necessary differences in the generations. This is not what I consider the dangers of our generation’s activism and overall social engagement.

My concern is the casual social critic, who attacks society from a distance and an overall ludic or ironic attitude. In this framework, arguments are not a genuine engagement with problems of significance. Instead, any given issue is criticized with repeated, easy and ultimately uncritical ‘criticism.’ I wrote above on the classic criticisms of Valentine’s Day. Compared to the whole host of social plights, it may be a bit muted, but consider: Valentine’s Day, as it exists in the United States, is a celebration (usually) of monogamous, heterosexual romantic-sexual love, expressed through (usually expensive) material gifts. All of these facts together represent fertile insight into some of the macro-social trends that play out every day. But the logic of cynicism, of the plain, satiric orientation cultivated in much of our generation, can prevent us from accessing genuinely radical avenues of theory and practice.

I mention satire because I think that much of the United States’ socio-political consciousness is shaped by the satiric mode of thought. Satire dates back thousands of years across cultures, but the Anglo-American tradition emerged in the Enlightenment under such figures as Jonathan Swift. In our day and age, consider the recent announcement of Jon Stewart’s forthcoming departure from “The Daily Show.” Viacom’s stock fell $350 million while think pieces poured out in reverent fondness of Stewart and his work. To say that Stewart hasn’t been influential would be disingenuous. But his politics, largely moderate, are brave or controversial only in the context of the American media landscape.

And when I see a video of President Obama on Buzzfeed doing the wacky things he does, I cannot help but feel horrified that someone who has projected a new, deadly manner of American military might is being presented in such a jokey sort of way. But he’s an ironic, charming guy!

On the other end of the spectrum, we find that even the fiery conservative discourse of Fox News and co. is conducted as a mass display of political theatre. The cynicism of American discourse is one where the stakes are non-existent, because its participants, situated amongst their privileges and the cynical-satiric mode of debate, means that it’s all … a game!

The particular truth of cynicism and the satiric mode that pervades the United States is that it does not enact change or even advocate for direct change, in most cases. Instead, it can serve (at best) as a pin prick for further work. Cynicism prevents further progress and obscures the lived horrors of social injustice. Awareness alone is not enough, but it is necessary for further action. Turn away from the easy criticisms, or dig deeper into them. Do not settle at the joke; fight to remove the set-up and the punchline.

Rhett Henry is a College senior from Lawrenceville, Ga. majoring in Creative Writing and Philosophy. In addition to the Wheel, he's involved in WMRE, Feminists in Action at Emory, the Pulse Anthology of the Arts and Scholars Teaching Scholars.

Letter From the Editor: Addressing the Wheel’s Complicity