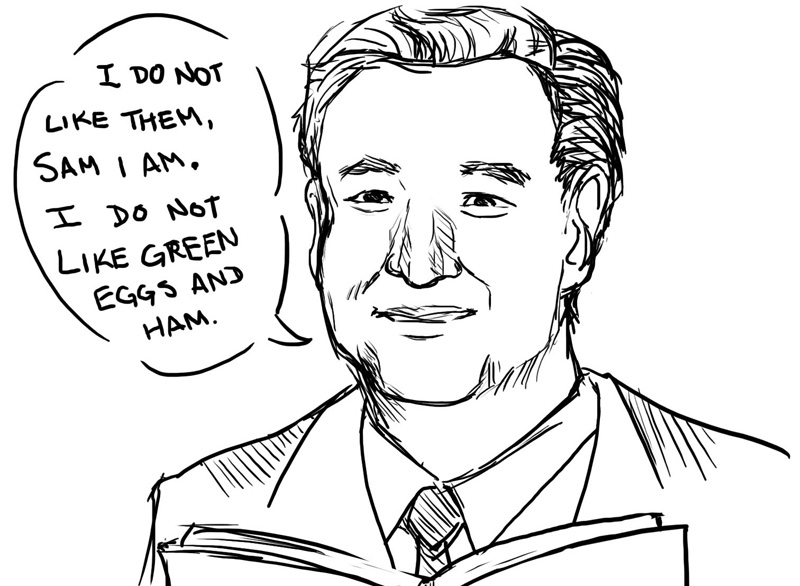 History was made this week when Senator Ted Cruz (R-TX) spoke for a continuous twenty-one hours and nineteen minutes, giving the fourth longest speech in United States Senate history.

Of course, we’ve seen quite a few marathon speeches from political leaders in recent history. Senator Rand Paul (R-KY) spoke for over twelve hours this past spring during a filibuster intended to prod Attorney General Eric Holder to confirm whether or not the President had the legal authority to authorize drone strikes against American citizens on American soil. And over this past summer, Texas Democrat Wendy Davis filibustered for eleven hours in an effort to prevent new abortion regulations from being passed in Texas.

So what was so special about Senator Cruz’s speech, apart from its length? After all, it wasn’t quite as dramatic as Ms. Davis’s speech, nor did it attract a mob of unruly protesters as hers did. And it wasn’t even a true filibuster like Senator Paul’s was, but was instead merely a speech designed to use up as much debate time as possible. So what was its purpose?

Simply put, Ted Cruz was speaking against the vote for cloture that would end debate on the continuing resolution to fund government. The House recently passed such a measure, as the nation’s debt ceiling is fast approaching, but the Senate’s version of the bill contained one crucial difference: unlike the House, the Senate bill includes funding for the Affordable Care Act.

Some cynics and left-leaning pundits have decried this most recent effort by Republicans to stop the complete implementation of Obamacare as something of an anarchist’s veto: instead of being “responsible” and funding the healthcare law, the GOP would rather risk shutting the whole government down. This view is both ill-informed about what actually takes place if the government shuts down (hint: essential services will still run and the Apocalypse will not begin) and entirely misses the key point of the Republicans’ efforts.

Republicans, by passing the continuing resolution, have publicly stated their willingness to fund and maintain all of the other spending increases put forward by Barack Obama during his time in office. Obamacare is the sole exception, because the harm that will come from it is so great that conservatives believe it must be stopped.

Such harm has been demonstrated clearly in recent weeks. Forbes recently reported that, instead of driving down healthcare costs for families by $2500 as President Obama famously advertised, Obamacare will actually drive premiums for families up by almost $7,500. The Washington Examiner also reported that new Obamacare regulations could triple healthcare costs for men and double them for women.

Further, Tuesday’s USA Today reported that a “glitch” in the law could mean that 500,000 children could go uninsured, even if their parents have employer coverage.

Due to these and other problems with the law, steadily growing numbers of Americans oppose it. The Real Clear Politics average of polls currently shows 52 percent of Americans opposing Obamacare and only 38.7 percent in favor of the law. That’s a remarkable 13.3-point spread, and it demonstrates how now, more than ever, the American people vehemently oppose the law.

Senator Ted Cruz, in speaking for over twenty-one hours, focused on this main point: that the American people have rejected Obamacare and that the government wasn’t listening to their demands. He read tweets and letters from concerned citizens, and was joined by other senators, including Rand Paul, who echoed his message. Cruz struck at the heart of the problem: the government has failed to serve the will of its constituents. “At the end of the day we don’t work for those holding cocktail parties in Washington D.C. We don’t work for the intelligentsia who live in cities and write editorials for big newspapers. We work for the American people.”

Opponents of the Republican effort to defund Obamacare are not entirely unfounded in their critiques. The continuing resolution bill will likely not pass a Presidential veto, and certain provisions of Obamacare were written in such a way that they couldn’t be defunded through this tactic.

The Republican strategy, however, poses a very interesting strategic problem for Democrats. As I stated previously, the Republicans are willing to fund the entire government–spending increases and all–with the exception of the Affordable Care Act. So while Democrats may talk of apocalyptic (but not really) government shutdowns, the only point at issue is the funding of one specific law: Obamacare.This raises a significant question: are Democrats, in the interest of continued government operations, willing to pass a spending bill that doesn’t include the ACA? Or, are they so committed to funding the ACA that they are willing to run the continuing resolution into the ground and virtually guarantee a government shutdown (which they have openly railed against) in the process?

If the government does shut down, whose fault will it really be? Republicans, for not wanting to fund the ACA in the first place? Or Democrats, who were so committed to supporting the ACA (over and against the opposition of a large majority of Americans) that they refused to fund the whole government over that single issue?

The answer to that question may never be clear. However, what is clear is that Senator Ted Cruz used his marathon speech to bring this issue directly to the front of the media cycle. Though opinion on his speech has been divided, he has succeeded (much like Senator Rand Paul with the issue of drones) in bringing the issue of the Affordable Care Act back into public awareness. The bill is less popular than ever before, and now that unpopularity has been pushed back onto the airwaves to be debated and discussed, as it should be.

Apparently, if you want to renew a fight against a bloated and harmful health care law, all you have to do is launch a Cruz missile over the airwaves.

David Giffin is an Alumnus of the Masters program in Theological Studies at the Candler School of Theology and is currently attending law school at Wake Forest University. He is from Charleston, Ill.