Laugh and Lunacy in ‘Mandragola’ 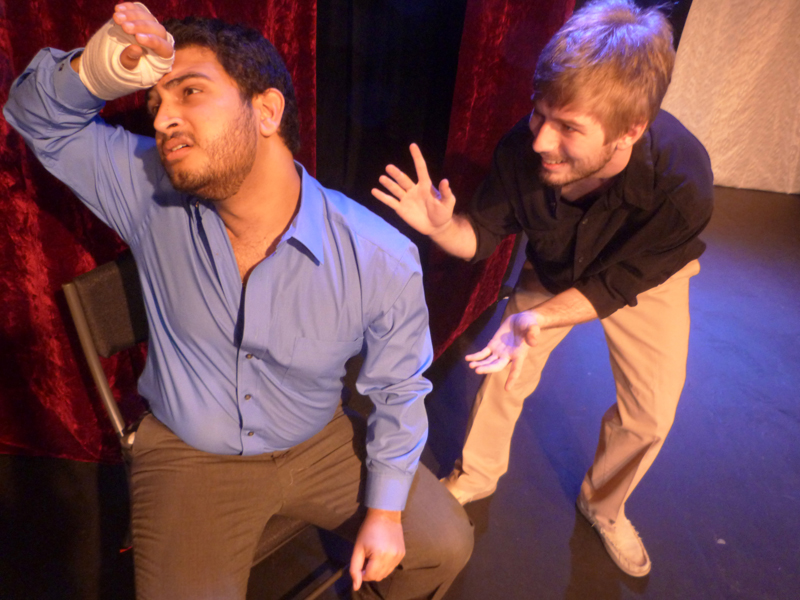 To put it simply, I pretty much have no idea what happened during “Mandragola.”

Going into the show, I had heard it was a little-known play written by Machiavelli (yes, that Machiavelli). I heard it was wildly inappropriate and also wildly hilarious. But that was about it. And now, two days after I saw the show, that’s still all I really know.

The performance, which was produced by Starving Artists Productions (SAP), premiered on Thursday, Feb. 20 and runs through Saturday, March 1 at the Black Box Theater in the Burlington Road Building.

College junior Azzi Haq portrays our protagonist Callimaco, a Florentine doctor who falls madly in love with the impossibly beautiful, amazing – and married – Lucrezia. Callimaco befriends Lucrezia’s husband, Messer Nicia (College freshman Carlos Maas), as part of an extravagant plot to seduce her and win her love. Lucrezia has been having trouble conceiving a child, so Callimaco promises to give her a pregnancy-inducing potion – the titular mandragola – which will kill the first man she sleeps with after taking it. So obviously, to avoid death, Nicia needs to find someone other than himself to sleep with Lucrezia. The plan involves deceit, elaborate disguises and paying off the town friar.

Naturally, chaos ensues. In the resulting screwball comedy, everyone’s cheating everyone, everyone’s sleeping with everyone and everyone’s bribing everyone. It’s totally incoherent – but totally hysterical.

“Mandragola” bounces back and forth between fast-paced, frantic banter and long-winded monologues. The play is undoubtedly at its strongest when it concentrates on the characters’ interactions: Callimaco’s moments of sheer self-indulgence juxtaposed impeccably against his servant Siro’s (College freshman Jemma Giberson) deadpan frustration and sarcasm, making for a perfect comic pairing. (“Nothing is ever so desperate that there’s no room for hope!” Callimaco exclaims excitedly, while Siro rolls her eyes and slumps against the wall.)

But there are also several monologues that break up these great scenes of dialogue. Various characters emerge onto the stage to give intricate discourse about … well, I don’t even know. The speeches are directed specifically to the audience, providing inklings of what’s to come or commentary on the events that have just transpired. But they weren’t particularly amusing or informative – every time a monologue began, I just zoned out until the dialogue got its chance to start up again.

That was one of the most frustrating aspects of the show: its inconsistency. One minute, the entire audience was cracking up, whether at the characters’ dramatic speeches or at an extensive, over-the-top sex joke (and trust me, there were plenty of those). The next minute, an awkward silence would fill the room while yet another outrageous antic got underway, but one that was lost on the audience. A lot of moments seemed to have some unspoken joke or subtlety that we viewers were supposed to pick up on, but we never quite did.

Another similarly puzzling aspect of the play was the depiction of gender roles. The friar was played by a female. Lucrezia was played by a male in drag. The production clearly had both a male and a female in these two opposing roles, so it wasn’t like this disregard for gender was a necessity due to a lack of casting choices. It felt like “Mandragola” was trying to make some kind of point with this choice, by having the traditionally patriarchal role of the friar played by a woman and the mind-blowingly beautiful woman played by a man. I just couldn’t quite tell what that point was.

On another note, a substantial amount of the dialogue expressed an uncomfortable amount of misogyny, hedonism and other generally (by modern standards) unacceptable philosophies.

Several times, the characters – particularly the friar – made blanket statements about the volatility of women, subsequently treating them horribly. The characters all constructed this elaborate plan regarding Lucrezia’s sexual activities and childbearing status, only telling her what she should do after the arrangements had already been made. And when Nicia expressed concern that Lucrezia would sin by cheating on him, the friar reassured him with a Biblical story about girls who were told to sleep with their fathers to reproduce. “Their intention was good, so they did not sin,” the friar explained.

Of course, I get that Machiavelli walked the earth 500 years ago. So the acceptable philosophies of his age may have been quite different. But with such a stark time gap, it was hard to tell whether this kind of dialogue was always inherently tongue-in-cheek, or serious in text and only made to be satirical in this particular performance.

There’s one more moment worth mentioning from “Mandragola.” When the entire gang gathers together for the culmination of their plan, an argument arises and Nicia whips out a sword with which to threaten the others. But it’s not a sword at all – it’s a sex toy.

Was it weird? Yes. Did it make me uncomfortable? Yes. Did I understand why this was happening? No. Was it totally hilarious? Absolutely.