‘Krampus’ is Non-traditional Christmas Fun for the Naughty Kids 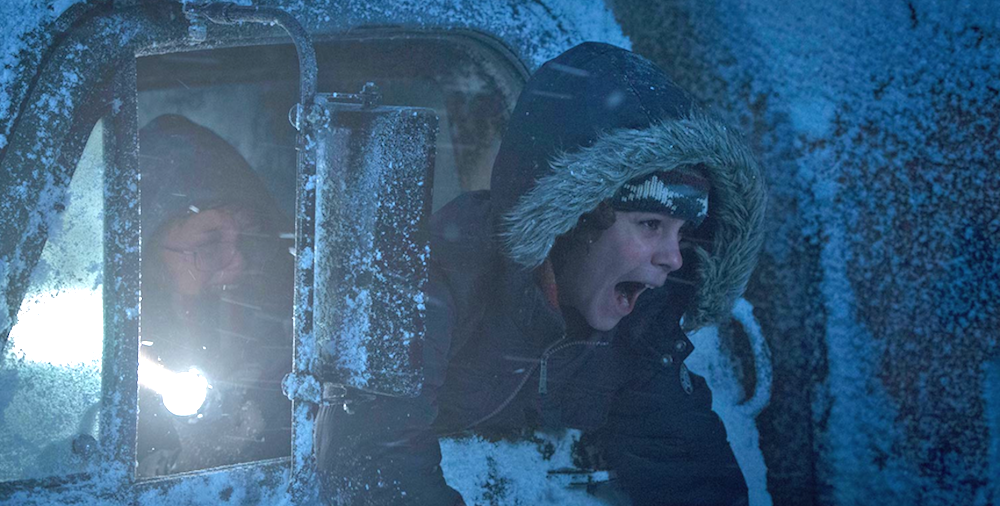 This Christmas, may I make a suggestion? If you have a pre-teen child in your family and you just don’t quite know what to get them, take them to Krampus and give them the gift that keeps on giving — recurring and scarring nightmares.

Now, for faithful horror fans, I doubt Krampus will hold many unique scares. You’ll mostly be  appreciating the craft. But in the grand tradition of the 80s Steven Spielberg and Amblin Entertainment productions like Poltergeist and Gremlins, it’s designed to target those childhood fears and leave you feeling just a little bit unnerved at the things you once regarded as innocuous.

The story is simple enough. Young Max Engel (Emjay Anthony) is excited for the holidays with his parents, Tom (Adam Scott) and Sarah (Toni Collette), his sister Beth (Stefania LaVie Owen) and grandmother Omi (Krista Stadler). But when the obnoxious “evidence why some people shouldn’t breed” side of his family comes to visit (played by venerable comedic actors David Koechner, Allison Tolman and Conchata Ferrell as well as a gaggle of hilarious looking children), Max’s Christmas spirit quickly turns sour.

A torn-up letter to Santa and a declaration of hate from Max to his family lead to the summoning of the Krampus, the shadow of Saint Nicholas who comes to punish the wicked and naughty on Christmas, and his Christmas themed minions. The family is trapped in their house because of a terrible storm and must fight their way out.

Krampus is a delightfully nasty little horror film, one that quickly sets up and quickly gets around to punishing our various characters and takes a delight in it that refrains from being too off-putting. While the film avoids gore (likely what the PG-13 rating owes itself to), it has no qualms about making all manners of creative non-gore tortures for our characters, mostly owing to an A+ sense of creature design.

Michael Dougherty proved his twisted horror bonafides with the Halloween anthology film Trick ‘r Treat, and he brings that same playful darkness to Krampus with some of the best creatures and torture devices in recent memory. His basic MO is to make terrifying standard Christmas imagery, and it works wonders. From the rabid teddy bear and the terrifying Christmas angel to the sadistic Gingerbread men to the monstrous, pagan masked elves, this film is full of nightmarish little details that will surely stick deep in the subconscious of younger viewers. Especially the Clown-in-the-Box with the crazy twisted toothy mouth that’s one of the best successors to Stephen King’s Pennywise. And of course, Krampus himself.

The way the film handles Krampus is probably its most potent success. Treating him like Godzilla from Gareth Edwards’ most recent Godzilla or a slightly more visible version of the shark from Jaws, Krampus flickers in shadows and terrifying calls from the blizzard for much of the film until the moment when he’s finally shown. And what a sight he is. He’s a massive monster with everything you would expect on a Krampus such as cloven hooves, big horns, vaguely goat-ish tendencies. But here’s a spoiler alert. Don’t keep reading if you don’t want to know.

One of the most clever details is the Krampus’ face. Or specifically, the face he’s wearing. Because in this film, Krampus is wearing the face of Santa Claus as his mask.

How messed up is that?

It’s phenomenal creature design that would be absolutely classic in a more all-time film, in a film that’s more great than good.

Unfortunately, Krampus is just good. The creature design and the creative approach to the material make it well worth a view somewhere. But I certainly have a very hard time calling it an essential film.

Firstly, the premise is clearly feeling strains during its runtime. Had this been like Dougherty’s previous Trick ‘r Treat and perhaps been a centerpiece short of an anthology, it would have had a much more effective dose of venom. As it is, we’re already feeling the effects of a too long set-up and much too few scenes that keep the film moving. And in a film that comes in at a little over 90 minutes, that’s a rough feeling.

Second, there’s a cast-off of the less “fun” aspects. The film features a number of strong comedic performers doing their comedic thing and feeling comfortable, but there’s never much given to their characters outside of narrative necessity. Characters and narrative structure are often run through a necessity check-list in order to get the film to the stuff that clearly excited the filmmaker about the film, and it leads to a film that feels a little thinner than one might like.

Third, the film simply doesn’t feel as manic as it needs to be. While PG-13 horror often feels held back, it’s not the lack of gore that holds this one back. There’s a manic energy Krampus needs in its later sections that it never gets. There’s an insanity to the film, but it feels a little too calm while moving from beat to beat, and it feels like it’s waiting for the next level of crazy that it never manages to get to.

I enjoyed Krampus. I’ll recommend Krampus — the amazing and creative creature design and cleverness of its action with strong comedic performers earn that much. But there’s a huge part of me that wishes it had a little more. A little more “oomph” that could have made it a non-traditional holiday classic instead of the good movie for people sick of sentiment that it ultimately is.