Kim Petras is Pop in a Pill 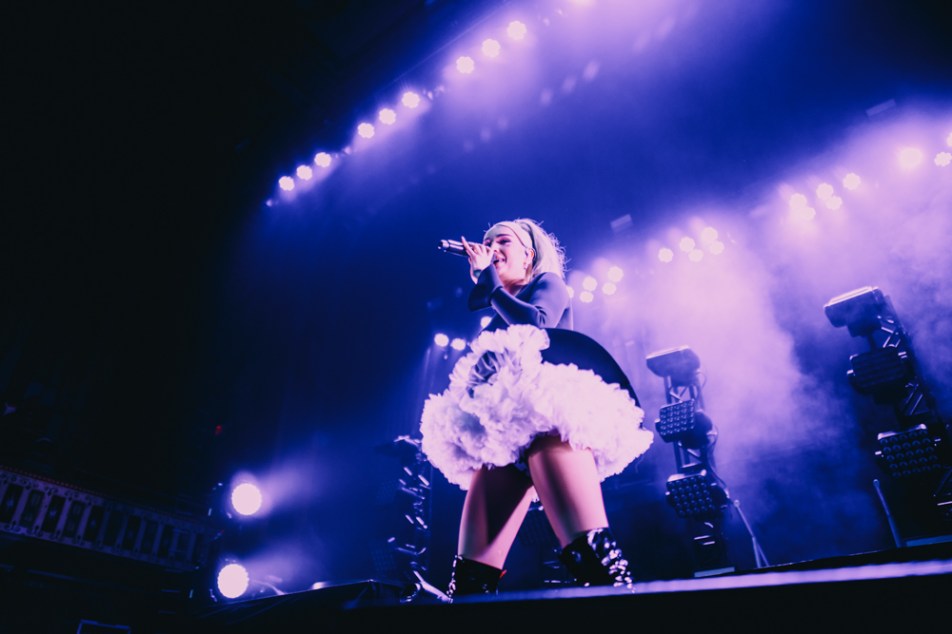 At 7:38 p.m. on Nov. 12, the power in the Tabernacle went out. There is no doubt in my mind that Kim Petras’ electrifying presence was what turned it back on.

Petras performed in Atlanta as part of The Clarity Tour, in support of her album of the same name. Petras is an electropop powerhouse whose popularity skyrocketed in 2017 with the release of her debut single “I Don’t Want It at All.” But she first gained international media attention for the coverage of her fight to receive early gender reassignment surgery at 16 years old. With more than 3 million monthly listeners on Spotify, she is easily one of pop’s most visible LGBTQ icons and one of its hottest rising stars.

After about an hour, Petras arrived on stage. Wearing a black dress with tight white frills under her skirt, a black and blonde wig and thigh-high latex boots, she waved at the crowd and launched directly into “Clarity,” the title track of her debut album. “Clarity” is a song about possessing the drip and ignoring every detractor, but the magic of the song is how its confidence is graceful and swaggering at the same time. Smooth, airy synth chords and a crisp kick play under Petras’ rolling vocals; the little ascending melodic line that plays during every chorus becomes the trumpeting of horns that announce to the world that she’s made it.

Petras delivers every moment of that song anew while in concert — the faux surprise of her announcement that she’s “the b***h with the sauce, apparently,” the paradoxically understated and melodramatic elegance of the outfit she’s wearing. If every pop song is a story, then a live concert should be the musical adaptation — Petras’ show absolutely was

And that was in no small part due to her supporting cast. DJ Alex Chapman kicked off the night with a bouncy dance-pop set. Chapman is renown on the internet for his pride-themed mixes. He kept his tracklist energetic and light-hearted. Standout moments included a mashup of rapper Blueface’s “Thotiana” and singer-songwriter Vanessa Carlton’s “A Thousand Miles.” Aaron Joseph, Petras’ longtime producer, also joined her on stage, standing in front of some sort of turntable with dubious function while singing along to songs and playing the guitar for a cover of “Human” by The Killers in the latter half of the concert.

Every few songs or so, Petras would change outfits during an intermission. After “Blow It All,” Petras took off her dress to reveal a black-and-white striped bodysuit that perfectly captured the sun-kissed vibes of “Hillside Boys” and “I Don’t Want It at All,” even in the freezing Atlanta weather. After that, she changed into a costume meant to look like a suit of armor to play songs off of her newest Halloween-themed album, “Turn Off The Light.”

It was a concert in acts. For each, there was a new outfit, new wig, some new fog and lighting — but never too much. It was a simple formula that, with Petras’ wonderful stage presence, helped capture all of her dramatics on high. Spartan simplicity, pop star realness.

Petras is an absolutely gifted performer. She only had a few real dance breaks throughout the show, but she killed them. There were no backup dancers or singers; it was just her and Joseph performing on the Tabernacle stage. And they completely owned it — if anything, one stage didn’t feel big enough for her energy. Petras’ vocal talent was even more impressive in person as harmonies over her own vocal backing tracks soared across the hall. Her delivery of her features on Charli XCX’s “Unlock It” and “Click,” in all of their bubblegum bass and future-pop glory, was also a wonderful counterpoint to her more retro dance-pop styled songs. Petras needs to start working with A.G. Cook way more.

Petras’ show captured the essence of what a pop concert should be with as few (figurative) frills and clutter as possible. Take note, fellow stars — the woo-ah queen has cracked the code.