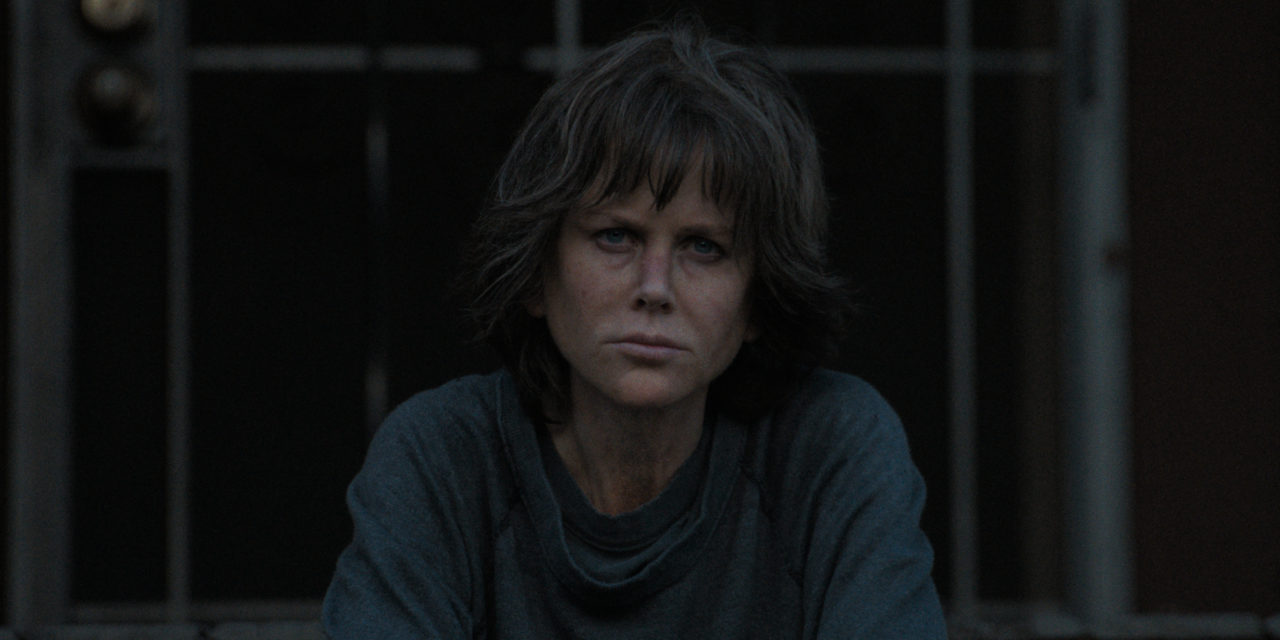 The film tells the story of Los Angeles police officer Erin Bell (Kidman) who attempts to infiltrate a gang by becoming a spy within their ranks. Her cover is blown while participating in a bank robbery gone wrong, and its consequences traumatize Bell and leave her without closure. Years after the incident, she’s given a second chance to bring down the gang.

This film takes its time to build its story. However, it complements the pace with immaculate storytelling, as it slowly unveils Erin’s identity, her past and how it motivates her. The plot mostly plays out with Erin trying to track down the leader of the gang, Silas (Toby Kebbell). Throughout the movie, Erin encounters different characters connected with her past as she tries to find Silas. This is an interesting method of developing the plot, reminiscent of The Bride’s plight in “Kill Bill.” This structure of Erin slowly tracking down each of the gang members allows for flashbacks, which help the audience understand why Erin is so hell-bent on dismantling this gang. The mixture of past and present scenes are surprisingly easy to follow, which further engages the audience. While many questions arise during the film, it was never too convoluted or confusing.

Kidman’s performance alone, if nothing else, carries this film. She was able to convey a powerful range of emotion, from rage to sadness, through a cold blank stare. The talented actress brought to life an incredibly layered protagonist. From the start of the film, she’s a defeated detective in her later years — grungy, battered and who, at this point, has nothing to lose. Kidman takes command of the movie and completely steals her scenes. Additionally, her physical transformation into a battered older woman alone was shocking. The flashbacks featured a significantly younger version of Kidman. The post-production crew’s work to make her appear much younger was incredible.

“Destroyer” takes no shortcuts in terms of the tone, creating a run-down, grimy setting. Set in the back alleys of L.A., the whole film feels dirty. The gritty tone is also emphasized by all the times Kidman’s character is psychologically pummeled into the ground again and again as she encounters characters previously connected to her past. She is forced to undertake horrible things such as lewd sexual acts in order to inch closer to the gang, allowing the film to bring out the darkest elements in Kidman’s character. This is potentially a flaw in the film, as it sometimes feels as though Erin can never catch a break. The film creates a frustrating environment where she’s constantly drowning. Erin doesn’t even have a single friend. Her life is incredibly depressing, and it becomes a little too much as our protagonist barely scores any victories.

The immaculate camerawork also added merit to the overall cinematic experience. During the transitions from the flashbacks to the present story, the camera lingered on Erin’s face, to not only show her reflection back on that time, but to underscore the complex emotions in her face. It created powerful moments throughout the film, most notably in the last five minutes of the film, which were absolutely heartbreaking to watch.

“Destroyer” is a crushingly realistic movie about revenge, led by a powerhouse performance from Kidman. Her performance exemplifies what it looks like to truly be haunted by one’s past, and the obsessive lengths through which one will try to obtain closure. It’s a film that cuts no corners in the gritty reality in which the film is set. The risks the film takes to stay faithful to this tone make it a rare movie to be released in 2018.