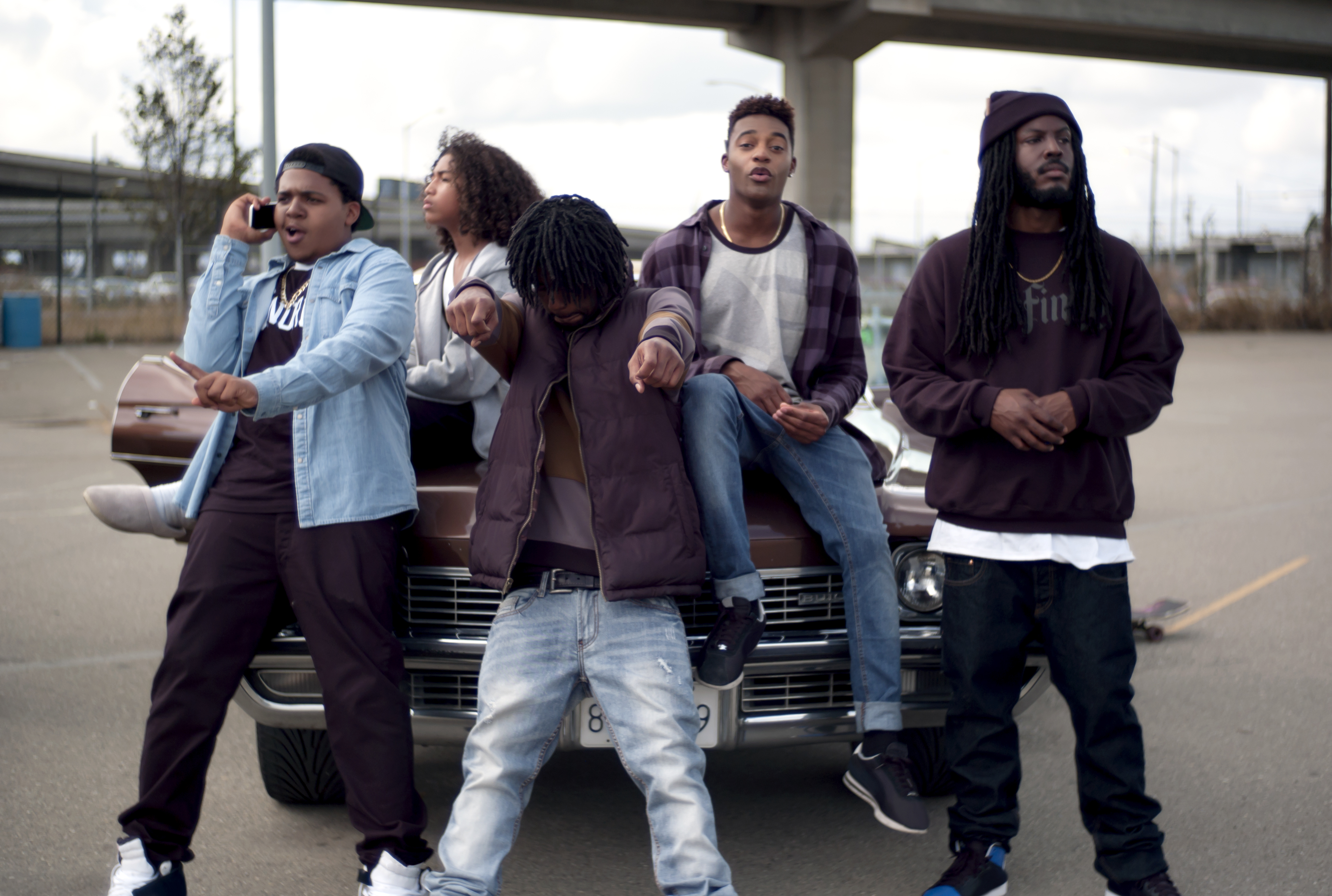 One of the best things about cinema is that it allows a filmmaker to take disparate genres and styles, blend them together and make something fresh and vibrant. Clashing tones and aesthetics can complement each other, offering levity when needed or grounding light-hearted proceedings in a harsh reality. So what happens when you bring the love-child script of directors John Hughes and Spike Lee to an extraordinary young cast? You get Justin Tipping’s Kicks, an astonishingly honest and brutal view into the struggles that youths often face in the black community.

The film centers around Brandon (Jahking Guillory), a shy, impoverished 15 year old living in Richmond, Calif. A social outcast at his high school, Brandon spends his time hanging out with his few friends, Albert (Christopher Jordan Wallace) and Rico (Christopher Meyer). Brandon is constantly ridiculed for his tattered and faded shoes. When a black market shoe dealer sells him a pair of Jordan Retro 1’s, Brandon feels like he’s on top of the world, until a local criminal named Flaco (Kofi Siriboe) jumps him and steals them. What follows is Brandon’s quest for vengeance not only to reclaim his new kicks, but also to finally stand up for himself.

Going back to my comparison to Hughes and Lee, Kicks is made up of two very different styles of film that somehow blend into something cohesive and seamless. Whereas Hughes is primarily known for his scripts that hyperbolize teenage life in suburban America, Lee’s films tend to focus on the racial tensions in the black community and the consequences they can have on an individual level.

Much of the Hughes-esque first act of the film is spent establishing Brandon’s day-to-day life, from stealing malt liquor from convenience stores to playing basketball with Rico and Albert, framing these moments in what resembles a 1980’s teen comedy montage, but with a modern rap soundtrack, featuring artists such as Nas, Jay-Z and Wu-Tang Clan.

Kicks’ heavy use of narration is reminiscent of something like Ferris Bueller’s Day Off, but it’s self-deprecating and humble rather than snarky and nonchalant. It’s this sense of dejection that permeates the latter half of the film, which brings to mind Lee’s no-holds-barred approach to framing black communities in his films, such as Do the Right Thing and Chi-Raq. As our three leads travel from Richmond to Oakland to confront Flaco, the film parallels their journey by shifting these “fun” scenes from light-hearted hang-outs to full on drug-fueled debauchery, as these relatively innocent kids glimpse the dark path onto which they are heading by seeking revenge.

The plot’s simplicity is complemented by the film’s subtle approach to world-building and character development. Tipping’s direction is near flawless and never beats you over the head with the subtext it’s trying to convey. Is the placement of a gun in a baby’s crib a hint at being born into a world of violence or simply a setup for Brandon to take the gun? Does Flaco’s son’s rejection of expensive Jordans in favor of Spider-Man Skechers represent his desire to break free from his father’s path, or is he just a big Spider-Man fan? It’s these kinds of small touches that leave food for thought, but never stop the plot in the name of ham-fisted commentary.

The young cast members all do remarkable jobs, particularly Guillory as Brandon. He nails the mix of quiet aloofness and world-weariness that Brandon embodies, making the moments in which he lashes out all the more startling and realistic in the context of the character. Meyer and Wallace steal every scene they’re in, providing the comedic relief that a dark film like this occasionally needs. However, they are also able to provide heartfelt performances as the moral compasses Brandon needs toward the end of the film. The trio has fantastic chemistry and feels like a real group of friends, at once mocking and cocky toward one another, but still having each others’ backs at the end of the day.

All the characters are as complex as the world they inhabit, even Flaco as the brutish antagonist. Tipping knows that the best villains have something more to them than just being one-dimensionally evil. He devotes numerous scenes to setting up Flaco’s relationship with his son, humanizing him and almost making him sympathetic. It’s this kind of emotional leverage that makes his final confrontation with Brandon all the more emotionally fulfilling as we begin to question whether Brandon is actually doing the right thing.

Like a gangster in a low-rider, Kicks sneaks up on you, pummels you to the ground and leaves you breathless from what you just experienced. It’s doesn’t feel like a film, but a rather a snapshot of reality. The film’s tagline is “These aren’t just shoes” and I’m inclined to agree. Kicks isn’t a simple story of a kid trying to get his shoes back, but rather a Straw Dogs-esque exploration of how easy it is to give in to darkness and lose ourselves in the process.