The nail-biting race between Republican Brian Kemp and Democrat Stacey Abrams was too close to call as of Wednesday at 5 p.m., according to the Associated Press.

Kemp declared victory on Wednesday afternoon and said he is looking forward to the transition. His campaign Press Secretary Cody Hall said it would be “mathematically impossible” for Abrams to win or for the remaining ballots to force a run-off election in a statement released on Wednesday afternoon.

Though trailing by 1.6 percent with 100 percent of precincts reporting, Abrams refused to concede the race. Abrams campaign manager Lauren Groh-Wargo said provisional and absentee ballots still remained to be counted.

The Abrams campaign announced that it is launching a provisional ballot program to ensure that each ballot was counted and left open the possibility for litigation against Kemp.

“I promise you tonight, we’re going to make sure every single vote is counted. Every single vote,” Abrams said early Wednesday, alluding to voter suppression efforts. She added that she expects the race to turn into a run-off.

If no candidate obtains more than 50 percent of the vote, the race goes to a run-off between the top-two vote getters. The run-off would be held on Dec. 4.

The tight race comes amid the Associated Press (AP)’s report in October that the secretary of state office, headed by Kemp, was using an “exact match” verification process for voter applications, leaving more than 50,000 voter registration applications on hold. A disproportionate amount of those applications were from African Americans, AP reported. Georgia purged 1.5 million voters between the 2012 and 2016 elections, according to the Brennan Center for Justice.

Kemp said he would resign as Georgia secretary of state on Thursday morning to prepare for his transition to governor. In previous months, he faced repeated calls to resign from overseeing the election, including from former U.S. President and Emory University Distinguished Professor Jimmy Carter.

On Nov. 4, Kemp launched a last-minute investigation into the Democratic Party of Georgia after his office received reports that the state’s voter registration website was vulnerable, according to the Atlanta Journal-Constitution (AJC). Kemp’s office did not provide any evidence that linked the Democratic Party to the hacking attempt.

Kemp has aligned himself with Trump and adopted similar policy positions to the president, including support for gun rights and tough anti-illegal immigration measures and opposition to Medicaid expansion.

His “four-point plan” campaign platform included plans to cut regulations for small businesses, cap state spending and audit tax breaks, promote economic development in rural Georgia and stop the proliferation of sanctuary cities, according to his campaign website. Abrams’ campaign platform called for the expansion of Medicaid, gun control laws, affordable housing and public education, according to her campaign website.

Abrams, who previously served as minority leader of the Georgia House of Representatives, enjoyed support from prominent public figures, including Oprah Winfrey, actor Will Ferrell and former U.S. President Barack Obama. Other stars such as rapper Common and actor Michael B. Jordan also canvassed for Abrams, going door to door to encourage turnout, according to The Washington Post.

In the most funded election in Georgia ever, both Abrams and Kemp raised more than the $20 million cutoff for contributions before the Nov. 6 election, according to the AJC.

On election day, Emory provided free shuttles leaving from Woodruff Circle to five nearby polling stations as part of the “Emory Votes” initiative. The shuttles ran from 6:45 a.m. to 8 p.m. The shuttles were sponsored by the Office of the Provost, Emory Campus Life, Department of Political Science, Student Government Association (SGA) and Graduate Student Government Association (GSGA), according to an Emory press release. 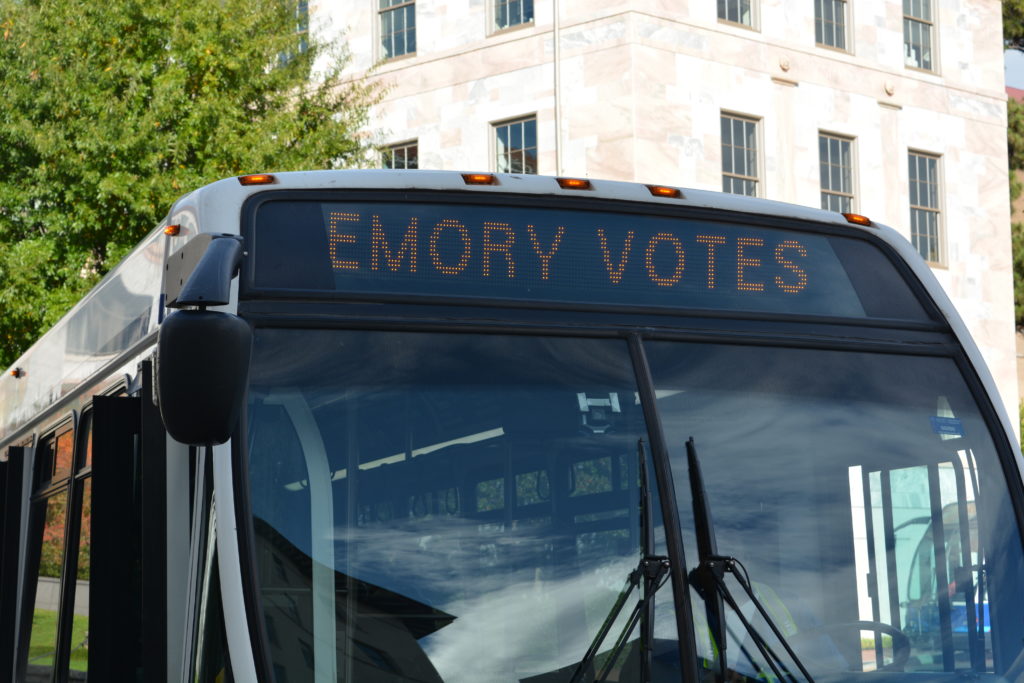 SGA Vice President of Communications Tiffany Haas (19C) said “no student activity fee money was provided for the shuttles. … Additional support may have been given by other offices listed on the flyers such as the Political Science Department.” Senior Director of Communications for Emory Campus Life Tomika DePriest declined to say how much the shuttles cost and which groups funded them.

Volunteers from student group Young Democrats of Emory, which endorsed Abrams, stood on Cox Bridge on Tuesday to direct students to Woodruff Circle to shuttle to the polls, dispense guides and answer questions from voters. In the weeks before the election, Young Democrats of Emory hosted canvassing and phone banking events to support Abrams’ campaign. The group brought high-profile figures including singer-songwriter John Legend and U.S. Rep. John Lewis (D-Ga.) to campus to encourage students to vote in the election. Emory College Republicans, which resumed activity this semester after a year of absence, did not endorse a candidate. 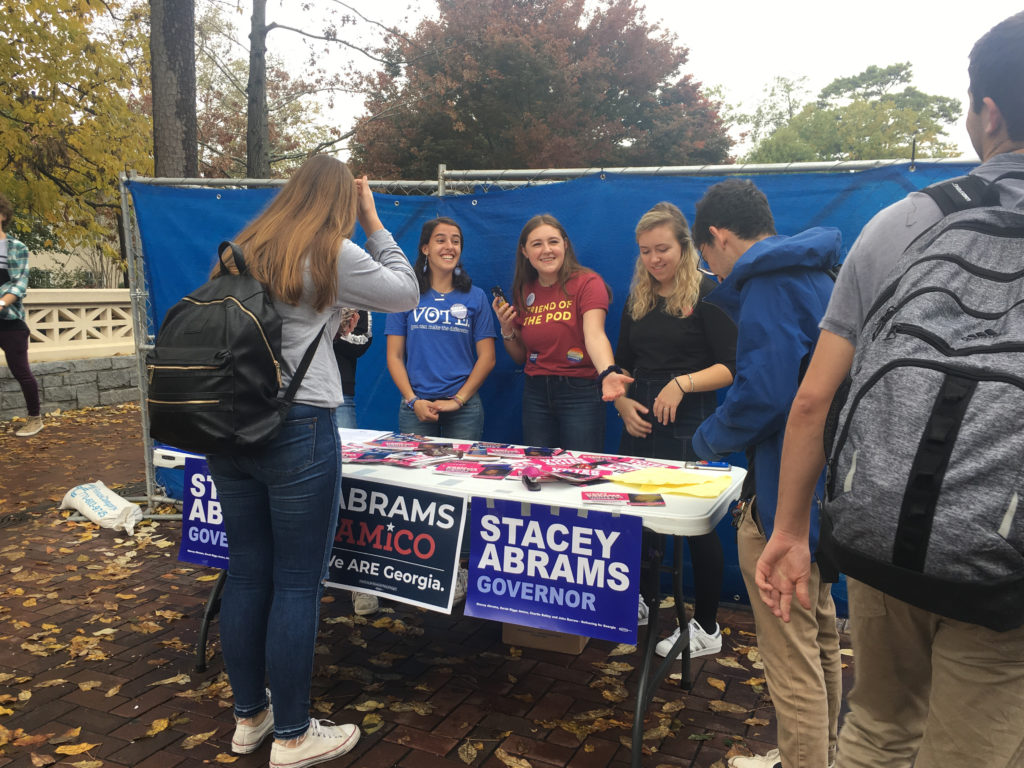 Student group Young Democrats of Emory passes out flyers and directs students to the shuttles on campus./Ayushi Agarwal, Photo Editor

Other student organizations such as Volunteer Emory provided pizza for voters getting on and off the shuttles at Woodruff Circle, while Emory Hillel hosted “Vote Chill and Grill,” which invited students to “celebrate civic engagement” while enjoying barbeque.

“Many students, including me, do not have access to a car to drive to polling stations,” Tell said. “I think it’s really amazing that Emory is providing this service for free because it incentivizes political involvement and helps increase the number of people who vote on campus.” 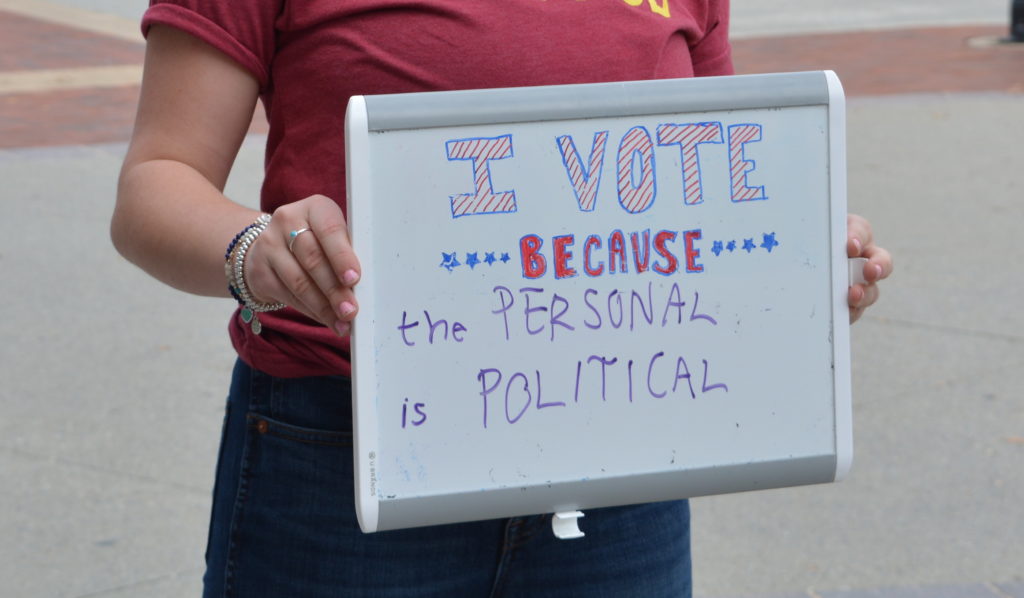 Though Rachel Heisler (19C) did not use the shuttles, she took a day flight on Nov. 5 to vote in her home state of Pennsylvania.

“My civic duty as an American citizen is important, and school is also extremely up there with those priorities, but I can always make up my classes and meet with my professors later on,” Heisler said. “Even though the vote isn’t as close as it is in Georgia, it’s still an important election in my home state, which I love and care about deeply.